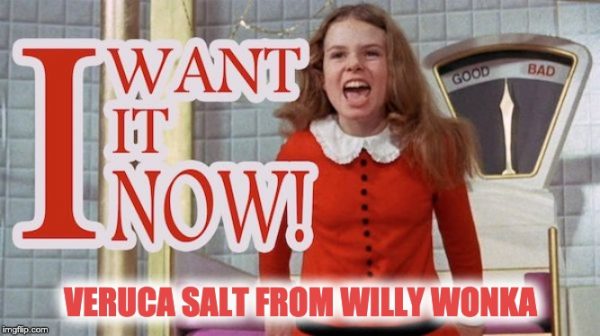 In an op-ed published by the Guardian on January 10, teenage climate kid Greta Thunberg, allegedly speaking along with 20 others, demanded the world abandon all investments in fossil fuel exploration and extraction, “right now.”

“We demand that at this year’s forum, participants from all companies, banks, institutions, and governments immediately halt all investments in fossil fuel exploration and extraction, immediately end all fossil fuel subsidies and immediately and completely divest from fossil fuels,” she wrote, referring to an economic forum to be held in Davos.

Where are the Ompalomahs from Willy Wonka? To take away the demanding child. 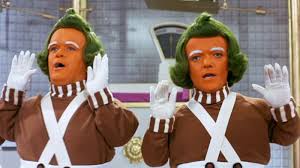 The world of finance has a responsibility to the planet, the people and all other species living on it. In fact, it ought to be in every company and stakeholder’s interest to make sure the planet they live on will thrive. But history has not shown the corporate world’s willingness to hold themselves accountable. So it falls on us, the children, to do that. We call upon the world’s leaders to stop investing in the fossil fuel economy that is at the very heart of this planetary crisis. Instead, they should invest their money in existing sustainable technologies, research and in restoring nature. Short-term profit should not trump long-term stability of life.

Gee Greta, without fossil fuels it will get cold really fast, the economy will collapse, putting many adults out of work, and you will no longer be able to travel the world to say, “I want it right now.”

Of course, what Thunberg fails to realize is that fossil fuels are responsible for improving life on earth as we know it, as the Library for Economics and Liberty notes:

No one exposes its sheer absurdity better than Alex Epstein in The Moral Case for Fossil Fuels.  You cannot have modern civilization without abundant energy. And despite decades of government favoritism, alternative fuels have yet to deliver. As global wealth has skyrocketed, energy use has risen 80%, thanks almost entirely to increased production of fossil fuels:

But it seems that Thunberg doesn’t care much for something called “reality,” and lives in a dream world where everyone bends to her will. My kids went through the same stage before they grew up.   But right now, she thinks that all she has to do is stomp her feet, hold her breath until she turns blue and the entire fossil fuel industry will pack up and go home.

It’s a new decade, from now on every day will be crucial. I write with 20 other young activists. These are our demands for the #WorldEconomicForum :https://t.co/GVcDtoU7gh

One person pointed out very accurately:

You are not writing anything, it’s all written by professional manipulators. Even this twitter account is being handled by hired people.

It wouldn’t surprise us one bit if this were the case.

Just remember, this is the same Thunberg who threatened to put world leaders “against the wall” if they didn’t do her bidding. That is an approach that won’t motivate the leader of a country. It is childish just the same as most of her public declarations.