Clapper Admits Obama Directed Him To Go After The Trump Campaign 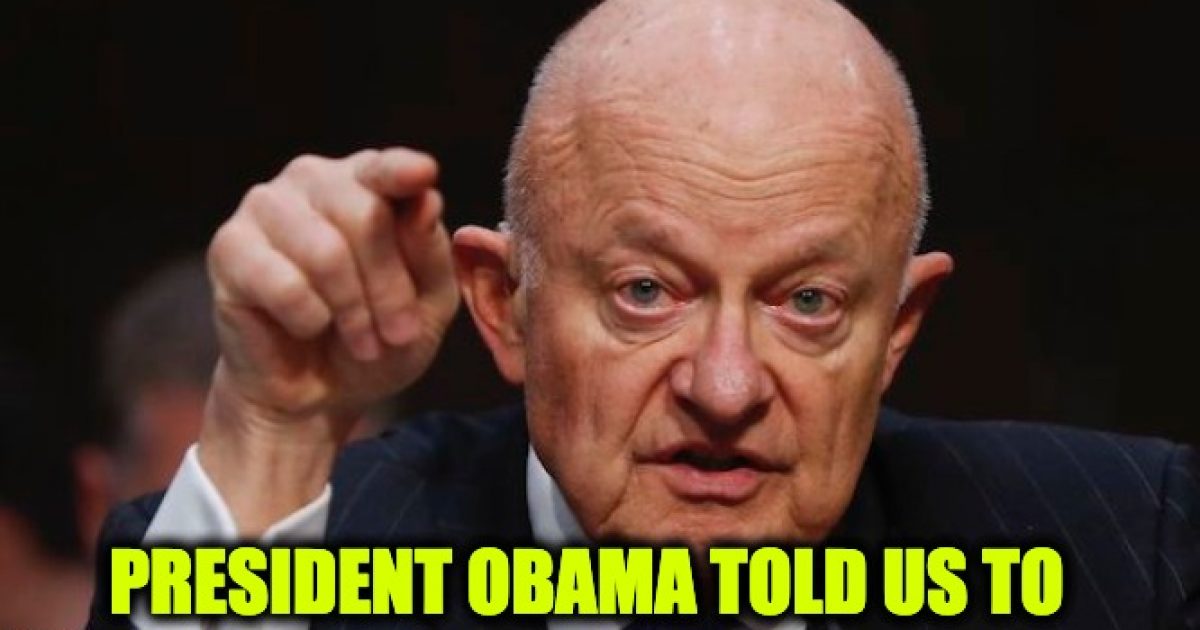 In a recent interview with CNN, James Clapper admitted he was simply following orders from Barack Obama the “commander-in-chief,” who had ordered intelligence agencies to do so. Clapper Obama

“I don’t know. I don’t think there was any wrongdoing,” Clapper said. “My main concern was with the Russians and the threat posed by the Russians to our very political fabric and ugh, the message I’m getting from all of this is apparently what we were supposed to have done was to ignore the Russian interference, ignore the Russian meddling and the threat that it poses to us and oh, by the way, blown off what the then commander-in-chief, President Obama, told us to do, which was to assemble all of the reporting we could.”

"What Obama told us to do…." pic.twitter.com/KEKHTx40j3

It has been obvious from the very beginning of this entire episode that President Obama was most certainly giving the instructions and directions to his sheeple. The MSM is an accomplice at this point. They are not to be trusted, because they wouldn’t know the truth if it slapped them in the face.

IMO, MORE PROOF THAT @POTUS TRUMP WAS SET UP BY THE DEEP STATE, BUT ALSO DIRECTED BY OBAMA HIMSELF! ??? Did James Clapper Just Admit President Obama Directed Him to Go After the Trump Campaign? https://t.co/rOS25GLbm5

First one who “rolls over” gets the best deal! That’s how you work off a case. pic.twitter.com/Ae2EwrY5RH

No way, that man would give up his handlers if given the opportunity. Doubt it will ever go beyond the agencies. Maybe a few of Obama’s lackeys but they’ll be sacrificed for the “good” of course.

“Not a smidgen of corruption.” pic.twitter.com/HZLNbV32jp

I have a Jack Russel Terrier that’s way smarter than Clapper. Him on the stand under oath? That is keeping Obama, HilLIARy and a whole host of deep staters up at night. GOOD!

We know obama micro-managed everything but it’s still surprising to hear this out loud.

I’m not surprised in the least, Clapper is a coward who would throw his mother under the bus. Hopefully, this will all be exposed by the John Durham investigation.