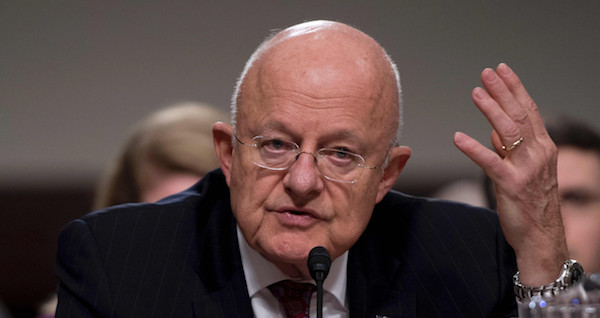 Director of National Intelligence James Clapper said he spoke to President-Elect Trump this evening to assure him that the 32-page salacious dossier leaked to Buzzfeed wasn’t produced any of the intelligence agencies, he expressed profound dismay over the leaks and assured the President-elect they didn’t come from the intelligence community. James Clapper added that they haven’t made any judgements about the document, nor was it used in creating the Russian hacking report president to both Trump and Obama last week.

Clapper described the conversation in this press release:

This evening, I had the opportunity to speak with President-elect Donald Trump to discuss recent media reports about our briefing last Friday. I expressed my profound dismay at the leaks that have been appearing in the press, and we both agreed that they are extremely corrosive and damaging to our national security.

We also discussed the private security company document, which was widely circulated in recent months among the media, members of Congress and Congressional staff even before the IC became aware of it. I emphasized that this document is not a U.S. Intelligence Community product and that I do not believe the leaks came from within the IC. The IC has not made any judgment that the information in this document is reliable, and we did not rely upon it in any way for our conclusions. However, part of our obligation is to ensure that policymakers are provided with the fullest possible picture of any matters that might affect national security.

President-elect Trump again affirmed his appreciation for all the men and women serving in the Intelligence Community, and I assured him that the IC stands ready to serve his Administration and the American people.

There were rumors about the anti-Trump slanders outlined in the document posted by Buzzfeed during this past summer, but no one though of publishing it because there was absolutely no proof that the rumors were true.
Apparently the intelligence community learned of the rumors/document after Senator John McCain gave received a copy of the 32-page dossier and turned it over to the FBI:

One would think that the Republican Senator from Arizona and former GOP presidental candidate would extend the courtesy to Trump to let him know about the documents that supposedly were about to be used by the Russians to blackmail the next president. Let’s face it McCain is the man who wouldn’t let his campaign attack Obama about Jeremiah Wright, but when it comes to fellow Republicans the Senator is not as nice. Shame on him!!
Facebook Twitter Flipboard