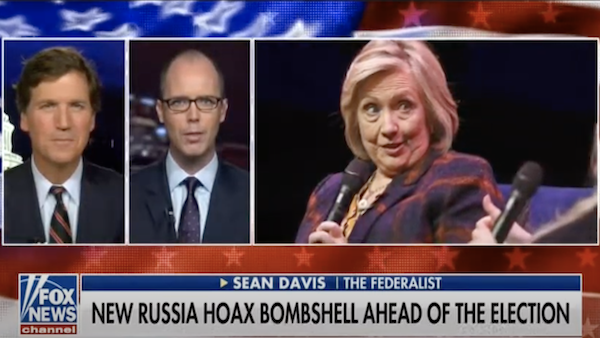 I am getting tired of this. It’s long past the time the American people are told the truth about Russiagate.  “Federalist” co-founder Sean Davis reports that CIA Director Gina Haspel is personally blocking the release of documents that will show “what actually happened” with Russiagate.  What the heck is Gina Haspel thinking? Why block these documents from being made public? Who is she attempting to protect?

Earlier this week  DNI Ratcliffe, sent a letter to Lindsey Graham and the Senate judiciary committee. The letter explained that a referral asking for an investigation of Hillary’s relationship with Russia went to then-FBI Director James Comey. The investigation referral asked the FBI to investigate something they picked up from Russian intelligence. They picked up that Hillary Clinton “had approved a campaign plan to stir up a scandal against U.S. Presidential candidate Donald Trump by tying him to Putin and the Russians’ hacking of the Democratic National Committee.”

Sean Davis reported on Tucker Carlson Tonight (video below)  Wednesday that Haspel is the one standing in the way of the declassification of documents relative to Radcliffe’s letter, and to other parts of the attempt to oust Trump,  that will help the American people understand how and why the Russia Hoax happened.

“This isn’t just a scandal about Democrat projection, this is a scandal about what was a coup planned against the incoming administration at the highest levels and I can report here tonight that these declassifications that have come out. Those weren’t easy to get out and there are far more waiting to get out.”

“Unfortunately those releases and declassifications according to multiple sources I’ve talked to are being blocked by CIA director Gina Haspel who herself was the main link between Washington and London. As the London station chief from John Brennan’s CIA during the 2016 election. Recall, it was London where Christopher Steele was doing all this work. And I’m told that it was Gina Haspel personally who is blocking a continued declassification of these documents that will show the American people the truth of what actually happened.”

If true, this does smell rancid.

Davis finished by calling on the President to take action:

I think at this point uh we need the President, Donald Trump to step in and say no more obstruction no more blocking. We need transparency and the American people need to hear the truth and that means declassifying everything letting everyone see everything about what happened.  So we can decide for ourselves before we vote in this election who we actually want in charge of these agencies.

The President is the final decision maker on what is classified and what isn’t.  It would be great if Trump saw fit to declassify that information.

A video of Davis on Tucker Carlson’s Show follows.