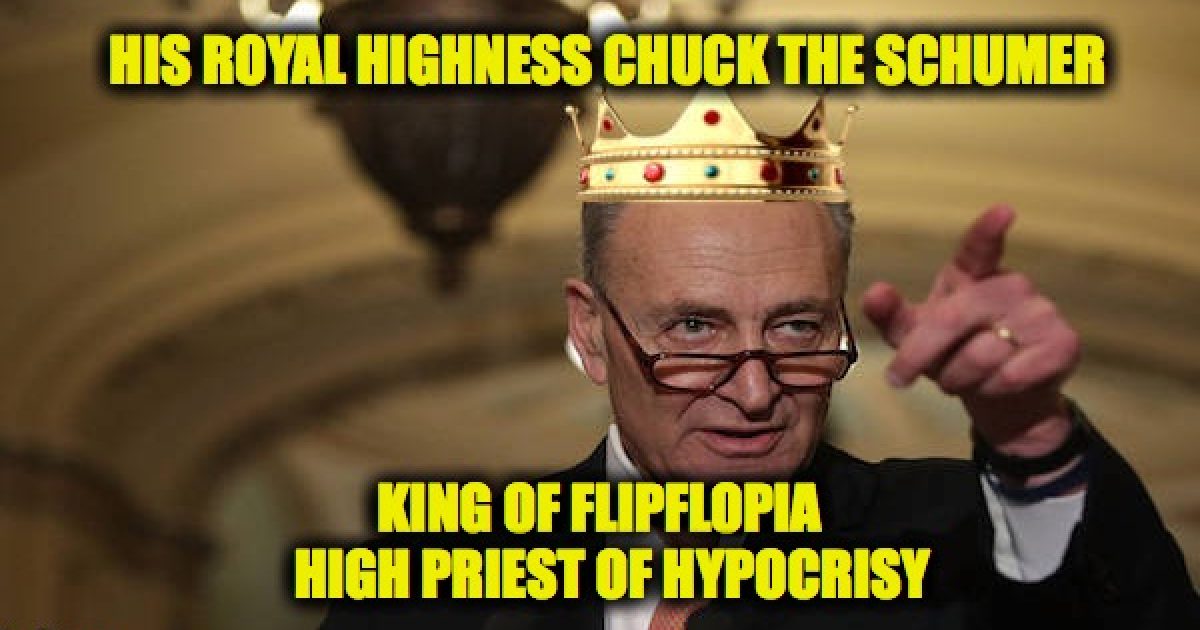 Somewhere outside of Washington D.C., there is a secret kingdom. It’s a land that the mainstream media knows about but never covers. The land is called FlipFlopia. It is ruled by Chuck Schumer whose full title is “Chuck the Schumer, King of FlipFlopia, Ruler Of All He Cannot See Because He Wears His Glasses Like An Old Schoolmarm and High Priest of Hypocrisy.

In his exalted position the Schumer enforces the kingdom’s prime directive “If something is supported prior to Donald Trump becoming president, it must be rejected now.”

For example Trump’s promise of building a wall on the southern border of the United States. Sen. Schumer is an opponent of the wall, in March he threatened to shut down the government if the spending bill contained funding for the wall. At the end of Septemeber, he continued his objection saying, “We are going to continue to have the Statue of Liberty be our symbol, not that damned wall,”

But in 2006, during the second term of Republican President George H.W. Bush, the King of FlipFlopia voted in favor of the Secure Fence Act which authorized a double-layered fence with barbed-wire on top, and room for a security vehicle to patrol between the layers all along our southern border (only 36 miles of the fence was built before Obama became president and killed the fence).

When Barack Obama was trying to get his second term cabinet picks approved King Chuck criticized the GOP:

But when President Trump submitted his cabinet picks, led by FlipFlopia’s Chuck Schumer the Democrats made slanderous accusations about the President and the people he’s sent to the Senate for confirmation, and Schumer “slow-walked” the nominations delaying votes he knew he couldn’t win.

In November 2016, his Highness Chuck of FlipFlopia gave  Bloomberg his opinion of FBI Director James Comey, “I do not have confidence in him any longer.”  He described Comey’s decision to speak publicly of an FBI investigation into Hillary Clinton’s negligent handling of classified information as “appalling. Yet six months later when President Trump fired Comey, FlipFlopia’s best said,  “Earlier this afternoon President Trump called me and informed me he was firing Director Comey,” Schumer told reporters on Tuesday. “I told the president, ‘Mr. President, with all due respect, you are making a big mistake ”

When the vote for Obama’s awful Iran deal was approaching, the master of misdirection wrote a passionate essay explaining why he opposed the deal. However when President Trump decertified the deal and laid out an agenda for Congress to propose and vote on triggers to reimpose sanctions Schumer tweeted:

The @SenateDems agree with #SecDef Mattis and General Dunford. We won’t allow the Iran deal to be undone.

Actually, General Mattis was part of the team that put together President Trump’s Iran deal plan.

In 2013 Schumer joined then-majority leader Harry Reid in announcing they were ending the filibuster for most presidential appointments. Schumer said there should always be an up or down vote no matter who is in charge. “We’d much prefer the risk of up-or-down votes in majority rule than the risk of continued total obstruction that’s the bottom line no matter who’s in power”

In 2017 the FlipFlopia filibusterer said something totally different. He called for his Senate Democratic Party conference to filibuster Judge Gorsuch.

I have concluded that I cannot support Judge Neil Gorsuch’s nomination to the Supreme Court. His nomination will have a cloture vote. He will have to earn 60 votes for confirmation my vote will be no and I urge my colleagues to do the same

In 2010 the Sovern of sophistry voted in favor of the Senate ramming through the Obamacare bill via reconciliation. In fact, a month before the ACA vote, Schumer signed a letter urging then-leader Harry Reid to slip in a public health insurance option which can be passed via reconciliation.
But in August 2017 he said it was a bad idea, saying, “Ramming tax cuts through under reconciliation — the very same partisan process that failed for health care — is the wrong way to do the business of the country,”

Of course, there are dozens of other examples, Chuck Schumer is royalty after all so he can flip flop all he wants as he continues to put his party before what will be best for his subjects.  The strange part is that the MSM who confronts President Trump on just about everything including what soda he drinks never confronts Chuck the Schumer over his insistence in sticking to the prime directive which leads to his royal FlipFlops. That why Chuck the Schumer’s royalty goes way beyond his Kingdom of FlipFlopia, to much of the country is a Royal pain in the butt cheeks.
j
Facebook Twitter Flipboard