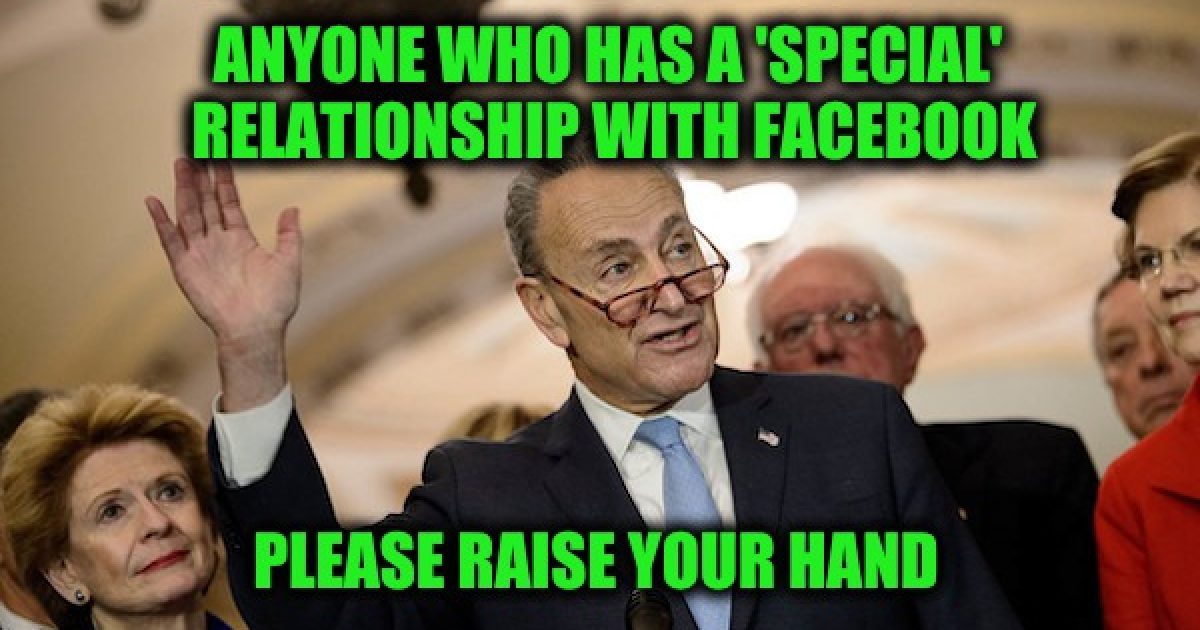 According to the New York Times, During the 2016 election cycle, Chuck Schumer Raised more money from Facebook employees than any other member of Congress (about $40K) according to the Center for Responsive Politics, Schumer’s daughter Alison was hired by Facebook and is now a marketing manager in Facebook’s New York office and the Senator protected Facebook from an investigation in the Senate.

It sure looks hinky,” political strategist Susan Del Percio told The Post. “This is an industry that’s been trying for years to fend off heavy government regulation by actively cultivating relationships with senators and House members.”

Why isn’t the DOJ investigating Chuck Schumer’s “special relationship” with Facebook?. Especially when one considers the information came from the very liberal NY Times;

In July, as Facebook’s [Cambridge Analytica] roubles threatened to cost the company billions of dollars in market value, Mr. Schumer confronted Mr. Warner, by then Facebook’s most insistent inquisitor in Congress.

A Senate aide briefed on the exchange said that Mr. Schumer had not wanted Mr. Warner to lose sight of the need for Facebook to tackle problems with right-wing disinformation and election interference, as well as consumer privacy and other issues.

“Sen. Schumer has worked aggressively to push Facebook to do more to purge fake accounts and bots used by the right wing and Russians to perpetuate a disinformation campaign and interfere with our elections,” Schumer spokesman Justin Goodman said Thursday.

Folks I’m not saying that there was definitely a pay for play relationship but is certainly enough evidence that an investigation is required. But the DOJ and the mainstream media are quiet.