Chuck Schumer: I Don’t Give Damn About The Kids-Want To Score Political Points 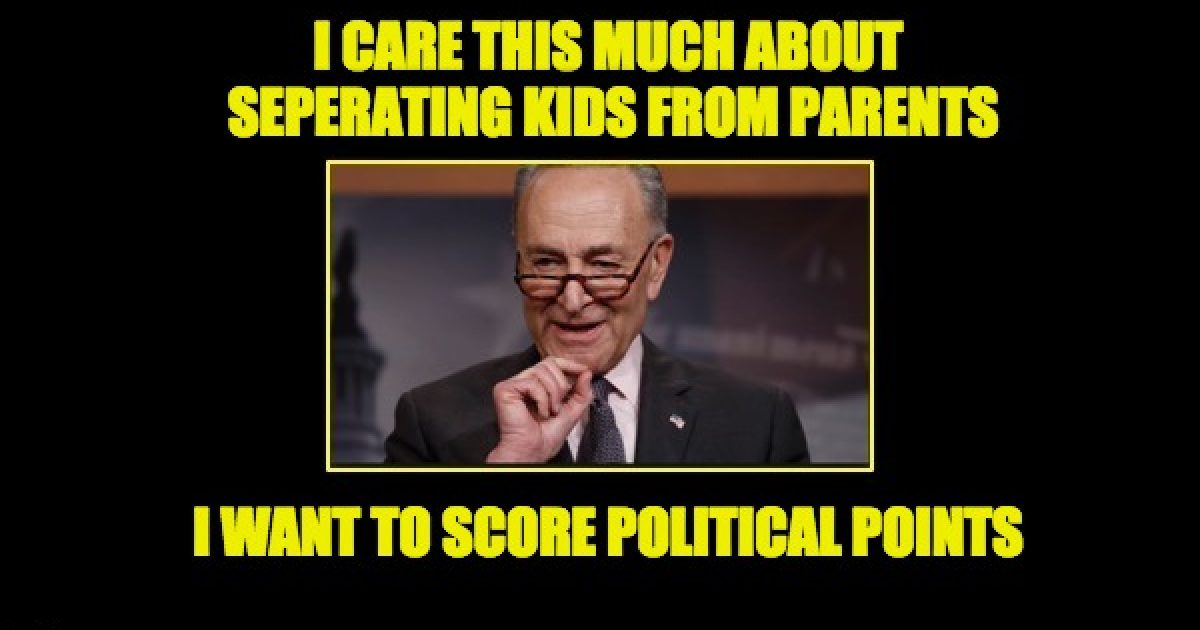 Proving once again that he doesn’t give a hoot about America, and only cares about the Democratic Party, on Tuesday, Senate Minority Leader Chuck Schumer, D-N.Y., announced his party will oppose any legislative effort to stop children from being separated from their families who are attempting to cross the southern U.S. border illegally. That opposition includes a thinly directed bill that only prevents the separation.

“There are so many obstacles to legislation and when the president can do it with his own pen, it makes no sense,” Schumer told reporters. “Legislation is not the way to go here when it’s so easy for the president to sign it.”

Asked if that meant Democrats would not support a bill backed by Senate Majority Leader Mitch McConnell (R-Ky.) to keep immigrant families together while seeking asylum on the U.S. border, Schumer said they want to keep the focus on Trump.

In other words, he doesn’t give a damn about the kids –all he cares about is scoring political points. Majority Leader Mitch McConnell said he was going to offer up a bill to keep immigrant families together while seeking asylum on the U.S. border, Schumer said they want to keep the focus on Trump.

“Again, the president can change it with his pen,” he said, warning that Republicans would likely try to add poison-pill provisions to any immigration bill that came to the floor.

Poison pill? Maybe if Chuck Schumer pushed his glasses all the way up to his nose, he would be able to read what’s in a piece of legislation.

What Schumer is really trying to do is end Trump’s policy of enforcing the law. He won’t allow a fix unless the POTUS  backs down and reverses his “zero tolerance” policy and allows open borders. But this president doesn’t believe in changing immigration law by executive fiat as Obama did. His job is to implement the law not to legislate.  Congress needs to fix the problem legislatively.

As explained by DHS Secretary Nielsen the separation of children from parents is caused by a trio of loopholes:

First, we need to amend the 2008 Trafficking Victims Prevention Reauthorization Act, or TVPR — which is much easier to say.  This law encourages families to put children in the hands of smugglers to bring them alone on this dangerous trek northward.  And make no mistake, we’ve talked about this before — this trek is dangerous and deadly.

Third, we need to amend the Flores Settlement Agreement and recent expansions which currently allow for — which would allow for family detention during the removal process.  And we need Congress to fully fund our ability to hold families together through the immigration process.

Until these loopholes are closed by Congress, it is not possible, as a matter of law, to detain and remove whole family units who arrive illegally in the United States.

But sadly for the Kids,

Democrats are such phonies. Democrats would rather children bake in tents than join Republicans in sending Trump a bill ending this situation. https://t.co/JfV6YS8sS4

I should stress that Schumer’s statement dismissed not just the GOP bill but the notion of a legislative fix entirely! Wth? https://t.co/p0k42Y3XQC

I would suggest to those protesters fighting for the rights of the kids in detention centers to direct their protests to the man who wants to score political points instead of helping the illegal immigrant children—New York Senator Chuck Schumer.

Come on Chuckie, how do you sleep at night?