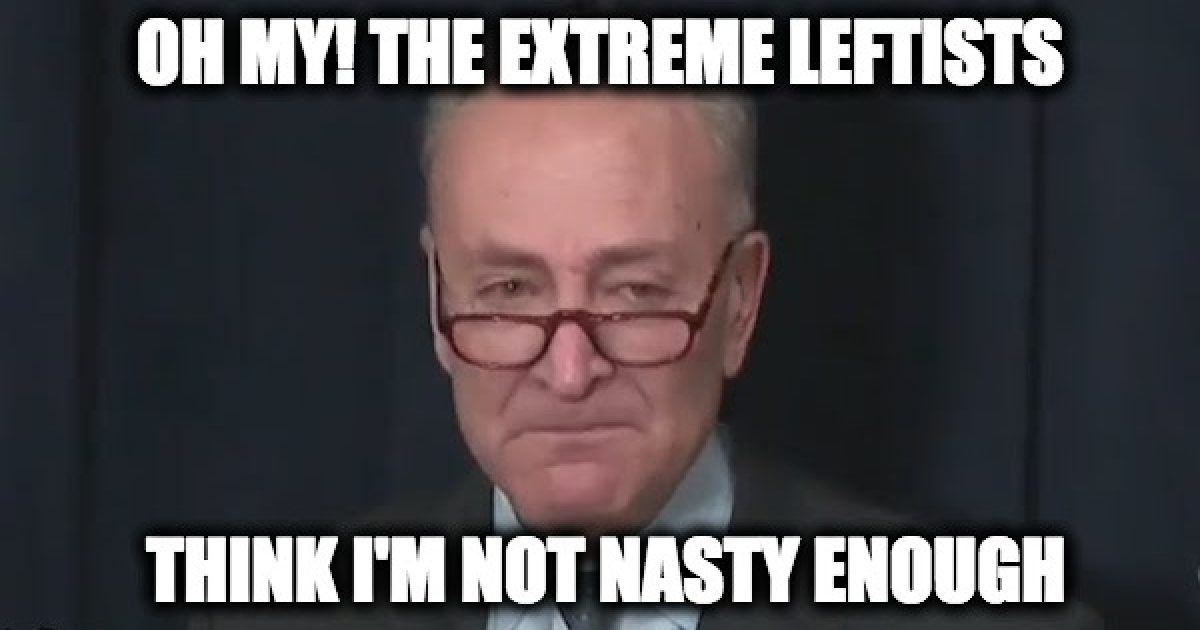 Oh boy, are they pissed off at Chuck Schumer! If you think the Democratic Party was crazy and unprofessional during the first day of the Brett Kavanaugh hearings, there are those who believe it wasn’t enough. In a letter to  Chuck Schumer dated Wednesday morning thirteen progressive groups contend that Schumer isn’t trying hard enough, the thirteen groups included; CREDO, Democracy for America, Indivisible, UltraViolet 350.org, Color Of Change, DailyKos, Demand Progress, Friends of the Earth, Justice Democrats, Social Security Works, #VOTEPROCHOICE, and Women’s March.

According to these liberal loonies, “the Supreme Court is on the line, and you [Sen. Schumer] are failing us.” They say that “the Democratic Party’s progressive base expects nothing less than all-out resistance to “criminal co-conspirator like Donald Trump’s” dangerous agenda,” and  “Kavanaugh is an extremist who will help institutionalize Trump’s hate for a generation,” they believe that Schumer and his Democratic Caucus isn’t cutting it.

Your job as Senate Democratic leader is to lead your caucus in complete opposition to Trump’s attempted Supreme Court takeover and to defend everyone threatened by a Trump Supreme Court. But unbelievably, nearly two dozen Democrats have still not come out against Kavanaugh, and just last week, you helped Majority Leader Mitch McConnell fast track 15 Trump judicial nominees. That is not the leadership we need.

They demand that each of the 49 Democrats come out against Kavanaugh immediately.

Holding 49 Democrats is the only way we can succeed in pressuring flippable Republicans like Sens. Collins and Murkowski to listen to the Mainers and Alaskans who are demanding that they vote no on a judge who will deprive women control over their own bodies.

As it stands now, all 49 Democrats, even the ones who haven’t announced will vote against Judge Kavanaugh unless the GOP senators hold ranks. If all 51 senators vote for Kavanaugh making their votes unnecessary, Democrats who need to vote for the Judge for their political well-being will be free to save themselves.

Your strategy to sacrifice the Supreme Court in order to hold Democratic Senate seats is not only strategically and morally wrong, it will fail. It is wrong to assume that a no vote on Kavanaugh puts red-state Democrats in electoral peril or somehow protects them from Republican attacks. Voters in West Virginia, North Dakota, Indiana, Missouri, Montana and Alabama care deeply about women having control over the bodies, protecting the health of their families, clean air and water, defending our democracy, and standing up to greedy billionaires and racist politicians who are using our differences to scare and distract us while they line their pockets. Those voters will reward a principled vote on this crucial nomination.

Democrats plotted coordinated protest strategy over the holiday weekend and all agreed to disrupt and protest the hearing, sources tell me and @frankthorp

I wonder what else they expect Schumer to do?  Perhaps cry like he did when he thought the president was mean to Muslims? Maybe Chuckie can ramp it up and cry like a kid in a shopping cart when mom goes through the cereal aisle without buying the child’s favorite.  That might drive the 15 senators crazy enough to come out of the anti-Kavanaugh closet.

Or maybe he could pass a law declaring that all the Senators who refuse to come out must wear their glasses like Senator Schumer does?  He could even call it the Senator Schoolmarm bill.

The Democratic Party’s progressive base expects nothing less than all-out resistance to Trump’s dangerous agenda. They want to elect candidates who will stand up for the people Trump threatens, not ones who compromise or cower as he and Republicans run the table in Congress and the courts. They understand the stakes of this Supreme Court fight. They know that we can win, but only if you lead. And they know that anything less than 49 Democratic votes against Kavanaugh would be a massive failure of your leadership. We hope you won’t let us down,

Have these liberal loonies watched TV news or read a newspaper since election day 2016?  Its been a long time since Chuck Schumer has given a crap about the United States or his own New York State. The only thing he’s cared about is the making the progressive wing of the party happy. Based on the direction of the progressives he has slow-walked every single Trump nominee and has refused to debate policy. Instead as is progressive tradition he resorts to calling people names. As for Judge Kavanaugh who seems to be a decent man, Schumer, and his Democratic caucus made up charges of being misogynist, racist, homophobic, xenophobic and anti-environment.

If being an obstructionist, crybaby and a liar doesn’t satisfy the progressive crazies as demonstrated by the thirteen groups who signed the letter, perhaps Chuck Schumer should change his strategy and start caring about his country and the state he represents more than he submits to the whims of the leftist progressives.

But he did come up with one idea, but all it did was shut down the Senate:

Senate Democrats on Wednesday forced the Senate to adjourn shortly after 1 p.m. to protest the nomination of Judge Brett Kavanaugh to the Supreme Court, although the move did not disrupt the ongoing confirmation hearing in the Senate Judiciary Committee.

Under Senate rules, unanimous consent is required for committees to hold hearings after 2 p.m. But Democrats withheld that consent, and without it, Republicans had to choose between either keeping the Senate in session and shutting down Kavanaugh’s confirmation hearing, or adjourning the Senate so the hearing could continue.

Republicans chose the latter, and the Senate was adjourned shortly after 1 p.m., after Minority Leader Chuck Schumer, D-N.Y., said on the floor that Democrats were making the move to protest Kavanaugh.