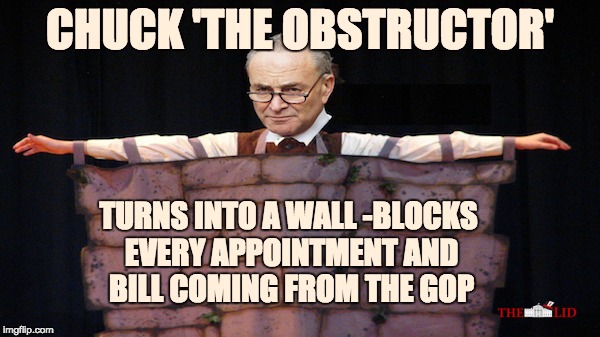 Saying he was too conservative and he was unsure Gorsuch would be independent of President Trump, Senate Minority Leader Chuck ‘The Obstructor’ Schumer announced on the Senate Floor Thursday that he would join with other Democrats in attempting to filibuster the nomination of Judge Neil Gorsuch to the U.S. Supreme Court.

And as expected, Chuck ‘The Obstructor’ warned against the GOP using the nuclear option…in other words eliminating the filibuster.

“If this nominee cannot earn 60 votes — a bar met by each of President Obama’s nominees, and George Bush’s last two nominees — the answer isn’t to change the rules. It’s to change the nominee,”

Gorsuch has been widely praised as an excellent pick for the nations highest court, even receiving the American Bar Association’s highest rating. In his first two days (three if you count Monday when just gave his opening statement) Gorsuch handled himself admirably despite being unfairly prodded by Judicial Committee Democrats, including the absurdity hunter senator Al Franken (who interestingly didn’t think it absurd that absentee ballots with his name on them were found in the trunk of a car during the recount for his first election to the senate.

But the Dems are just following the direction of their solid brick leader, Chuck ‘The Obstructor’ Schumer who believes that it isn’t important that Gorsuch would be a fine associate justice, party comes before country.

A video of Thursday’s filibuster-call floor speech by Chuck ‘The Obstructor’ is below: