Why Are There No News Reports About The Christian Churches Are Being Attacked? 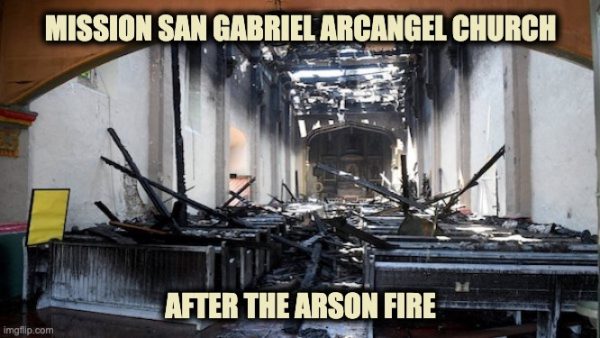 A few years ago, when one jerk placed raw bacon on the handle of a Mosque causing insult and ceremonial impurity, but no physical damage the media suffered a conniption of outrage, and criminal charges were filed. It was ‘outrageous’ that houses of worship were being attacked they reported. And they were correct, America is a nation that tolerates all faiths, people should respect all houses of worship.  But where are those same outraged voices now that houses of worship for a religion that doesn’t fit neatly within their liberal political interests is being targeted? Christian churches attacked

Shawn King, aka ‘Talcum X,’ explicitly called for the destruction of Christian symbols he considered ‘too white.’ He was once a leading member of the BLM movement and still has a considerable following. 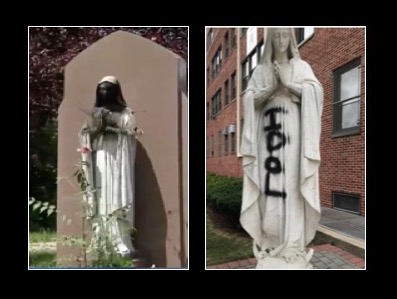 Whether it was prompted by his statements, by racial overtones, or by Marxism’s natural hatred of all religious expression, we have seen a massive spike in anti-Christian violence and vandalism.

Churches–mostly Catholic churches–have been under attack. Is it because of Catholic doctrine, the outrage over the clerical abuse scandals, or just because Catholics are big fans of statues? Who knows.

What we do know is that there is a distinct lack of outrage.

Churches are being burned down. Where is the media? pic.twitter.com/vs9Ky71mLJ

A slew of Catholic churches from Florida to California were burned and vandalized over the weekend as police continue to investigate whether or not they are connected to protests targeting symbols and statues.

Following George Floyd’s police-related death in May, Black Lives Matter leaders and protesters called for the toppling of statues, from Confederate symbols to former U.S. presidents and abolitionists. Activist Shaun King called for all images depicting Jesus as a “White European” and his mother to be torn down because they’re forms of “White supremacy” and “racist propaganda.”

Over the weekend, the historic 249-year old Mission San Gabriel Arcángel in San Gabriel, California, was set on fire. The roof was damaged, but it could have been worse. The church was under renovation to celebrate the 250 year anniversary, but that was before the COVID outbreak, and thankfully many of the art and relics were removed.

In another incident, a man in Ocala, Florida, drove a minivan into a church before pouring gasoline and setting it on fire. In Boston and New York, statues of the Virgin Mary were vandalized.

It’s really just the next step in the scapegoating and hatred that many in the Left hold toward religious expression generally. ‘Bitter clingers clinging to their guns and religion,’ said Obama dismissively. And Bernie & Co. have openly opposed appointees precisely based on their Christian beliefs. And he filled his campaign with people like Linda Sarsour, who hated Jews. Because socialists disagreed with anyone who followed God before government,

This writer has watched such rage play out before. Spoiler Alert: It ends badly.

I once shared my story about my friend, Pastor Samuel Nayak, who was martyred in India when similar scapegoating lead to violence, looting, and (obviously) deaths. While we are unlikely to see 10,000 Americans displaced and chased out of their homes by violent mobs, the scapegoating and hostility is an ominous sign that strife is being exploited, rather than calmed by people of power and influence.

Note from The Lid: Why is a Jew co-writing and posting about attacks on Christians? One of the reasons we moved from my last house was the swastika painted on the tree in my front yard. The Synagogue where I pray now has been defaced with anti-Semitic symbols. Just as it is awful when it happens to me and my place of worship—it makes me physically ill when it happens to the sacred sites of others.