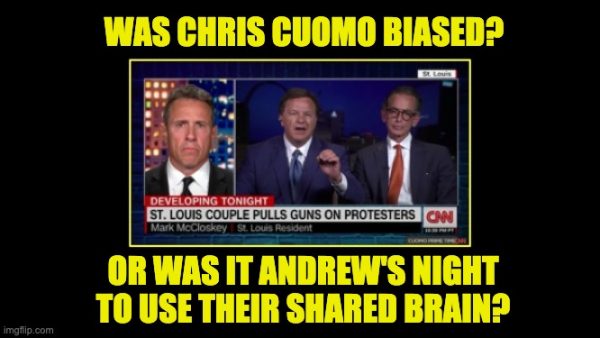 As we and others reported, Mark and Patty McCloskey defended their St. Louis home when a mob of Black Lives Matter protesters broke into a private gated community with firearms, triggering a number of leftists who apparently thought it was racist for them to defend their own home from a group of people who threatened to kill them. Chris Cuomo Mark McCloskey

Cuomo attempted to portray the mob that broke a private gate to gain entrance as peaceful demonstrators on their way to protest St. Louis mayor Lyda Krewson that happened upon McCloskey’s property. McCloskey said the mayor lives more than a half a mile away and the mob was in a gated community that did not provide access to the mayor’s house.

During an interview on Fake Chinese Propaganda network CNN, Anchor Chris Cuomo who shares a common brain with his brother Andrew spent 13 minutes trying to make Mark McCloskey appear to be “the face of resistance” and a hater of Black Lives Matter.

“How do you feel about becoming the face of political resistance to the Black Lives Matter movement?” Cuomo asked, apparently unaware that McCloskey, actually supports BLM and has donated to Democrats.

“I am not the face of anything opposing the Black Lives Matters movement,” McCloskey told Cuomo.  “I was a person scared for my life who was protecting my wife, my home, my heart, my livelihood, I was a victim of a mob that came through the gate. I didn’t care what color they were. I didn’t care what their motivation was. I was frightened.

“I was assaulted and I was in imminent fear they would run me over, kill me, burn my house and you have to listen to context in St. Louis where in June 2nd of this year, I watched the city burn, I watched the 7-11 get smashed in, looted, and burned for 40 minutes on live television with nobody showing up to do anything. And I realized at that time, we’re on our own,” he added.

“When bad things happen, they unpredictably turn real bad, real fast. That same night, retired St. Louis police captain David Doran was murdered. These things get very bad very quickly. When those people came through the gate, when it was a mob, I didn’t take the time to see their birth certificates or anything else, I was defending my — my house, my life, my wife and what I spent 32 years building there,” he told Cuomo.

McCloskey shredded Cuomo, telling the propagandist that what was done to him was terrorism.  He went on to highlight the false information put out by a number of liberal media outlets.

Cuomo got even snottier but might have been angry at McCloskey because he is at the age where his brother Andrew would have thrown him into a nursing home to catch COVID-19 and die. “You were the one pointing a loaded weapon at a group of people who were walking past, looking for the mayor’s house as a point of protest,” Cuomo said.

“Chris, that’s an entirely false concept. No single media outlet has ever mentioned the complete falsity of that statement. The mayor’s house cannot be reached through my neighborhood. Lyda Krewson lives up on a road called Lake and Washington. That’s three blocks north and a half a mile west of my house,” McCloskey told him.

During the interview, Cuomo took a shot at FOX News host Tucker Carlson, who interviewed Mr. McCloskey an hour before his appearance on CNN. And it ended with this exchange about the President retweeting the video of the McCloskey’s defending themselves.

Cuomo:You were within your rights, it should be judged as such. I wanted to talk to you about the broader implication. I wanted to talk about the horrible picture of what’s going on in America right now. To me it’s not about what’s right and wrong in a court of law, it’s what we have right and wrong about how we treat each other. That’s why the president tweeted this tweet, Mr. Watkins, you know it, and Mr. McCloskey, you know it. He retweeted it because he liked the image of white resistance to this movement and I’m not saying that was fair to you. But we know that’s why he did it. that’s why he deleted it. I wanted you to speak for yourself.

Mark McCloskey: I’m glad you are a mind reader. Because no one else thinks you are.

Cuomo:Oh, in fact, he didn’t delete it. Good, makes my point.

Cuomo: You didn’t say that it was said to me for me. I’m thinking about something else where someone was screaming white power in a video that the president retweeted. He deleted that one. He didn’t delete the one of you. I just wanted to give you a chance to speak about it. We both know you don’t have to be a mindreader to assess a pattern. You’re not a mind reader either.

A video of the interview follows:

In Cuomo’s defense, it might have been his brother Andrew’s night to use their shared brain.