His Cringe-Worthy Reaction Was To A Brand New Uncle Ruckus Parody Account With 14 Followers. 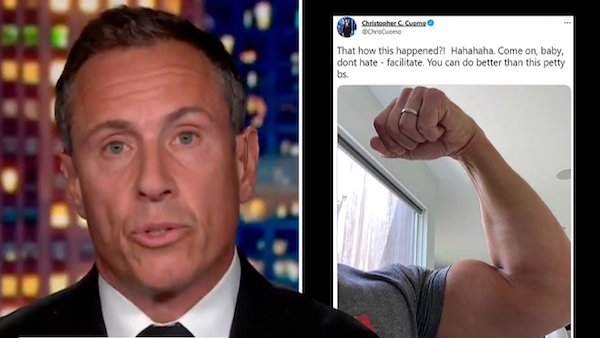 Last week, Chris Cuomo hosted his show in Surfside, Florida, where a condo collapsed and left several people dead, multiple injuries, and over 150 people unaccounted for. It was a catastrophic event and has really put life in perspective for many people. Our hearts go out to those affected, and we pray that more people will be found alive.

Cuomo, surprisingly, handled the coverage compassionately and didn’t let the anti-DeSantis partisanship color his coverage. He recognized that it’s a delicate operation to not have the building collapse further on top of possible survivors.

Twitter users were complimenting him on his reportage. But it was one particular tweet by a guy who admitted that he’s not a fan and called him “Fredo” — which is a racial slur against Italians akin to the n-word according to Cuomo — that caught Bro Cuomo’s attention.

I’m not a fan of Fredo. However, that was an excellent report.

He quote-tweeted Peter Pietrowski and took the opportunity to bash him in the process.

I am a fan of all who call themselves 'christian first' then act like trash. https://t.co/sakolO2zEa

The thing is, although Cuomo loved the praise…

Chris, you and your colleagues are doing crucial work and doing it damn well. God bless you, man, and take care of yourself.

…he was also saying that this wasn’t the time to go after political foes — even though that’s exactly what he did with the quote-tweet of Pietrowski suggesting that he calls himself a Christian but acts like “trash” presumably for calling Cuomo “Fredo.” BTW Pietrowski also is a “USMC Vietnam Vet, US ARMY Afghanistan Vet. Retired Colonel. US Customs and Border Protection Anti-terrorism Team Supervisor, Retired,” so maybe he earned a little leeway from responses like the one Cuomo gave…but continuing…

Appreciated. We all know what we would want if we had missing loved ones. Crisis has no hue of red or blue. Or at least it shouldnt. The #SurfsideCollapse community was warm and embracing of need. Impressive and respected https://t.co/eIIWgeS6fd

Cuomo continued to retweet praise of his coverage by his handful of adoring fans and hitting back at his critics.

One tweet by a Twitter user named “uncle ruckus” with a whopping 14 followers was critical of Cuomo’s self-indulgent, self-congratulatory Twitter behavior and responded to one of the tweets with the comment, “You’re gonna break your arm jerking yourself off.” 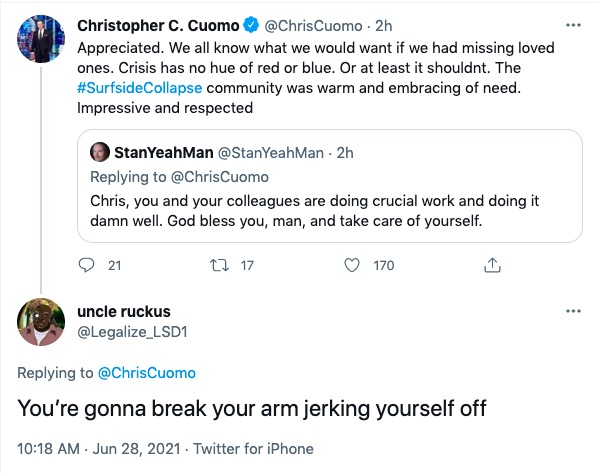 Since CNN is the network where Jeffrey Toobin — known for tooting his Toobin during a Zoom call with his New Yorker colleagues — was allowed back on the network after only a few months in exile, it was a pretty funny little dig.

Cuomo, however, with an ego twice the size of his I.Q. decided to post a weird photo of his bicep. He wrote, “That how this happened?! Hahahaha. Come on, baby, don’t [sic] hate — facilitate. You can do better than this petty bs.”

That’s when it started.

That how this happened?! Hahahaha. Come on, baby, dont hate – facilitate. You can do better than this petty bs. https://t.co/pN84VyzDdz pic.twitter.com/0R5H7LSggV

It’s a truly bizarre response from the clearly narcissistic Chris Cuomo. Is he admitting that he does indeed stroke his *ahem* ego quite a bit? Is he saying that he could give Toobin a run for his money in a masturbatory marathon? Is that a CNN shirt that he’s wearing? And…what the heck is going on with his bicep? It looks weird. There’s just so much going on here.

But the weirdest thing about this is that Cuomo is so incredibly thin-skinned that he is responding to some parody account with only a handful of followers that is advocating for the legalization of LSD.

The thing is, Cuomo seems quite content with his response and is continuing to quote tweet his fangirls.

What an absolutely bizarre guy.

Find yourself someone who loves you… as much as @ChrisCuomo loves himself. https://t.co/QDbh51Bhdd

A weird flex that’s literally a weird flex. What a time to be alive. https://t.co/1STwgz5flC

You should see the arm he uses on his brother Andrew. pic.twitter.com/VRwQIXFujh