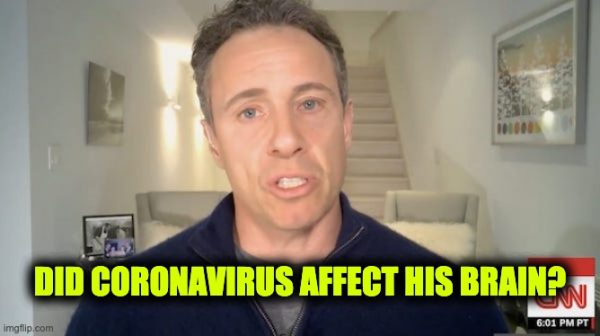 For a network that claims to be ‘facts first,’ they sure don’t mind skipping over the audio that disproves the lies they are trying to spin. Chris Cuomo gave us a masterclass on exactly how that kind of selective misquoting can be weaponized against his political rivals. Chris Cuomo deceptively edited

Since before Trump took office, he has taken a position that his REAL opponent was not the DNC, exactly, but was, in fact, the news media spin machines working so hard to cover up the sins of Democrats and manufacture sins of Republicans.

But it’s pretty clear from the way they circled the wagons around Harvey Weinstein, Matt Lauer, and others that the Media cares much more about the (R) or (D) after someone’s name than they do about reporting the actual news.

That’s why we call them what they are: The Media(D).

Here’s the less intelligent Cuomo brother (he seems to no longer get any scheduled turns with the shared brain) ranting about Trump’s ‘failures’ to take proper action in the face of this crisis. Of course, to sell that horsesh*t story, he’s got to cut out the part of the clip where Trump talks about the aggressive steps that were taken to secure America from asymptomatic disease carriers entering the country en masse… by closing border traffic to high-risk areas.

After the CNN clip, Trump's full remarks play which show Trump talking about the action he took

Cuomo cut that out pic.twitter.com/9cwgPvhj1u

Is it any wonder the Media(D) has fallen to such contemptible levels of disrepute?

This is as blatant a lie as the one they did about ‘very fine people.’ That one ALSO conveniently left out the parts of what Trump said that would disprove their allegations that Trump supported racists.

Considering the words that refuted it was separated from the ‘very fine people’ soundbite by less than 60 seconds of audio, it takes some VERY cynical editing to push that story.