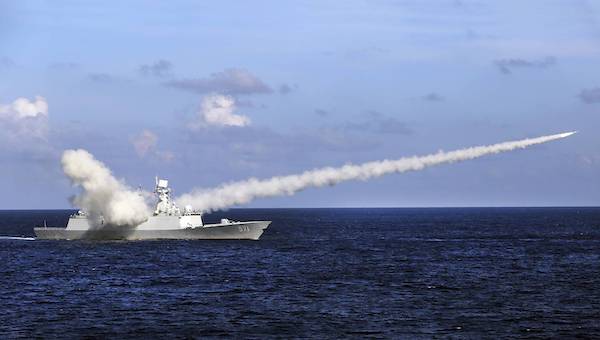 Since the Russian invasion of Ukraine, China has repeatedly stated that Taiwan is “not Ukraine” by saying that “Taiwan has always been a part of China.” The ominous statement simply means they intend to bring Taipei back into China, probably by force. China plans “military exercises” that will extend to Tuesday in a 6 nautical mile radius of the South China Sea. 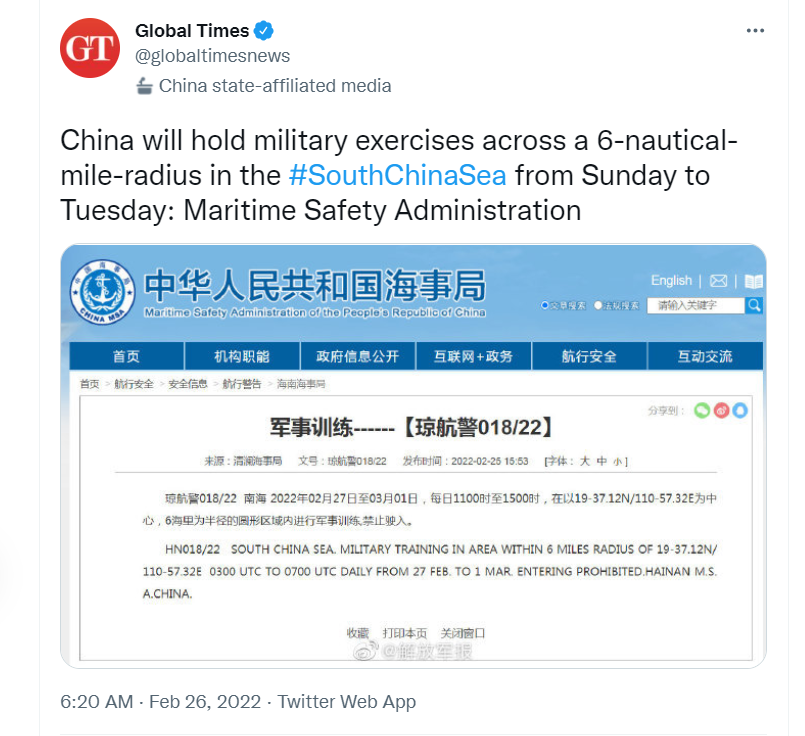 Per the China-affiliated Global Times.

But Taiwan is not Ukraine, as Taiwan is an inalienable part of China. “The Taiwan region’s peace hinges on the peaceful development of cross-Strait relations, rather than fawning on foreign forces for arms sales and military support,” Chinese Foreign Ministry spokesperson Hua Chunying said at a routine press conference on Wednesday.

“Taiwan independence” only leads to a dead-end, and no one should have any illusion or make any miscalculation on this issue, Hua said.

Do they see this time as their chance to make a move? Taiwan has existed since 1949. They, like Ukraine, are not in any international mutual aid agreements, thanks to cowardly US actions which identify China as the “only” China. China plans military exercises in the very place that could cause yet another war.

As for the Chinese aircraft, that move came after sending 9 aircraft into the zone on Friday. They have regularly sent warplanes into the ADIZ, Taiwan’s Air Defense Zone. Meanwhile, the United States sent the USS Ralph Johnson Guided Missile Destroyer through the Taiwan straits on Saturday. China claimed it sent a “wrong signal” to “Taiwan secessionists” and called it “provocative.”

Taiwanese should not become complacent and think that China will not attack.

“But in the face of foreign forces intending to manipulate the situation in Ukraine and affect the morale of Taiwanese society, all government units must strengthen the prevention of cognitive warfare launched by foreign forces and local collaborators,” said (Taiwan President) Tsai…

“In the face of China’s continued military expansion and provocative actions, our country will maintain its national security with a solid defense and continue to deepen the close security partnership between Taiwan and the United States,” said the Taiwanese Ministry of Defense earlier this month.

Japan’s Foreign Minister Yoshimasa Hayashi had also recently warned about how China was observing the world’s response to a Russian invasion of Ukraine, fearing that the Chinese may follow suit if it deems the risk to be little enough. It can also be remembered Putin and Xi met ahead of the beginning of the Beijing Winter Olympics, exchanging pleasantries and verbal commitments to supporting each other with regard to the issue in Ukraine and the issue with Taiwan.

Here we have another potential for disaster. The US has no formal ties to Taiwan but has supplied arms regularly. China claims the US will not come to Taiwan’s aid should they decide to take it back. That China plans military exercises beginning Sunday is suspect, given the timing.