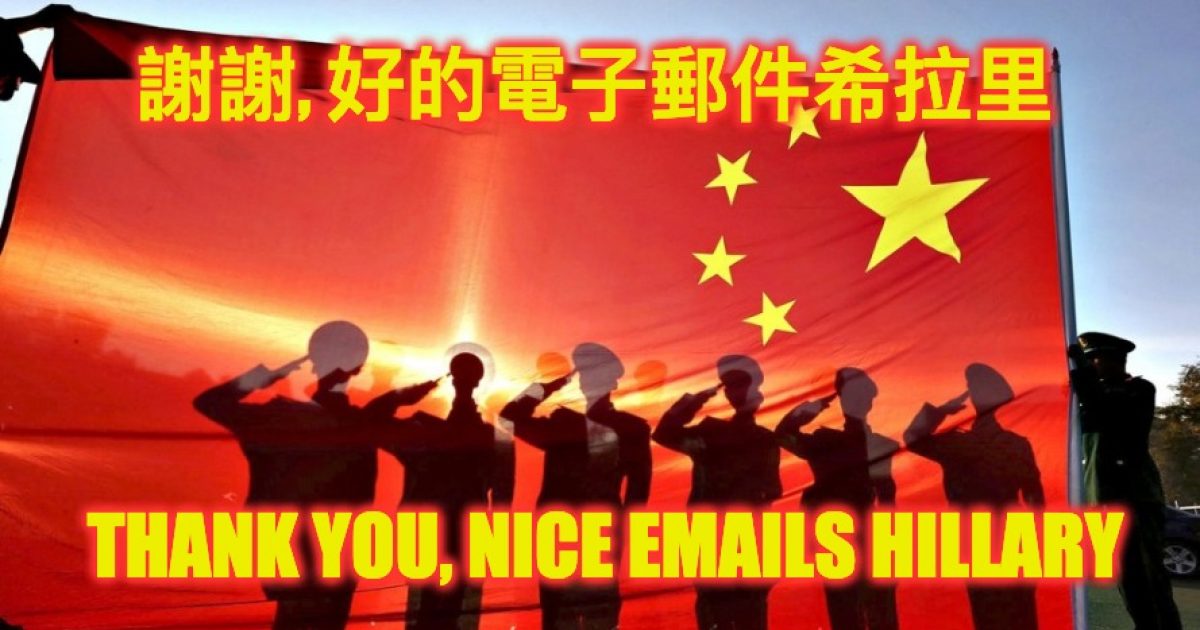 At the end of January, an Epoch Times reported that the Intelligence Community Inspector General (ICIG)  told the “FBI in 2015 that a forensic review of Hillary Clinton’s emails unearthed anomalies in the metadata of the messages. The evidence in the metadata suggested that a copy of every email Hillary Clinton sent during her tenure as the secretary of state was forwarded to a foreign third party.”  Evidence proved the third party was China.

Gee if the FBI was told in 2015 that a foreign third party, probably China had hacked Hillary’s private server why then did FBI Director Comey say a year later:

With respect to potential computer intrusion by hostile actors, we did not find direct evidence that Secretary Clinton’s personal e-mail domain, in its various configurations since 2009, was successfully hacked

The Epoch Times report was confirmed by other sources:

During a July 2018 Congressional hearing, Rep. Louie Gohmert (R-Tx)  confronted Peter Strzok with the information that  ICIG reportedly found an “anomaly on Hillary Clinton’s emails going through their private server. And when they had done the forensic analysis, they found that her emails, every single one except four, over 30,000, went  to an email address that was not on the distribution list, an unauthorized source.” Gohmert said the ICIG presented the findings to Strzok, who responded to the Congressman that he didn’t remember.

Gohmert: Let me refresh your memory. The Intelligence Community Inspector General Chuck McCullough sent his investigator Frank Rucker along with an IGIC attorney Janette McMillan to brief you and Dean Chapelle and two other FBI personnel who I won’t name at this time, about an anomaly they had found on Hillary Clinton’s emails that were going to the private unauthorized server that you were supposed to be investigating?

The Daily Caller spoke with a former intelligence officer in August 2018 who confirmed  the ICIG “discovered the anomaly pretty early in 2015.”

“When [the ICIG] did a very deep dive, they found in the actual metadata — the data which is at the header and footer of all the emails — that a copy, a ‘courtesy copy,’ was being sent to a third party and that third party was a known Chinese public company that was involved in collecting intelligence for China,” the former intelligence officer told TheDCNF.

“The [the ICIG] believe that there was some level of phishing.But once they got into the server something was embedded,” he said. “The Chinese are notorious for embedding little surprises like this.”

(…) The Intelligence Community Inspector General warned of the problem, but the FBI subsequently failed to act, Texas Republican Rep. Louie Gohmert said during a July hearing.

Using their own sources, Fox News also reported that Hillary’s server was hacked and added the China part:

A source briefed on the matter confirmed to Fox News the details of the Caller’s reporting, and said that the ICIG was so concerned by the revelation that officials drove over to the FBI to inform agents — including anti-Trump agent Peter Strzok — of the development after it was discovered via the emails’ metadata.

The source told Fox News the hack was from a Chinese company, describing it as a front for Chinese intelligence.

A second source briefed on the matter told Fox News that officials outside of the FBI indicated code on the Clinton server suggested a foreign source was receiving copies of emails in real time.

When asked about the significance of the report, Rep Gohmert  (R-TX) told Fox:

“It’s critically important. There are countries that would pay a tremendous amount of money to know what Clinton was saying, doing and thinking through her emails, what she’s doing, who she’s going to meet, what she thought about meetings, not necessarily classified but critically important and those emails were compromised and people like Strzok, when they were briefed, knew this would devastate her chances of being elected and they weren’t about to do anything to hurt those chances.”

Despite the reports, there have been no indications of an investigation in the Congress or anywhere else (in congress it would have to be the Senate because the Democrats control the house).

Judicial Watch announced earlier this week that it is trying to get to the bottom of the hacking of Hillary’s server. They announced that it is suing the Office of the Director of National Intelligence (ODNI) for details of a meeting they had with the FBI regarding national security threats associated with former Secretary of State Hillary Clinton’s “private” email system.

(…)Our lawsuit could further expose how anti-Trump activists like disgraced FBI official Peter Strzok bent over backwards to protect Hillary Clinton from having to answer for her national security crimes,” stated Judicial Watch President Tom Fitton. “The scandal of the illicit Trump spying is directly tied to the Deep State protection of Hillary Clinton.”

It’s incredible that our public servants haven’t tried to get to the bottom if the hacking reported by the IG. It’s been four years since it was first issued!