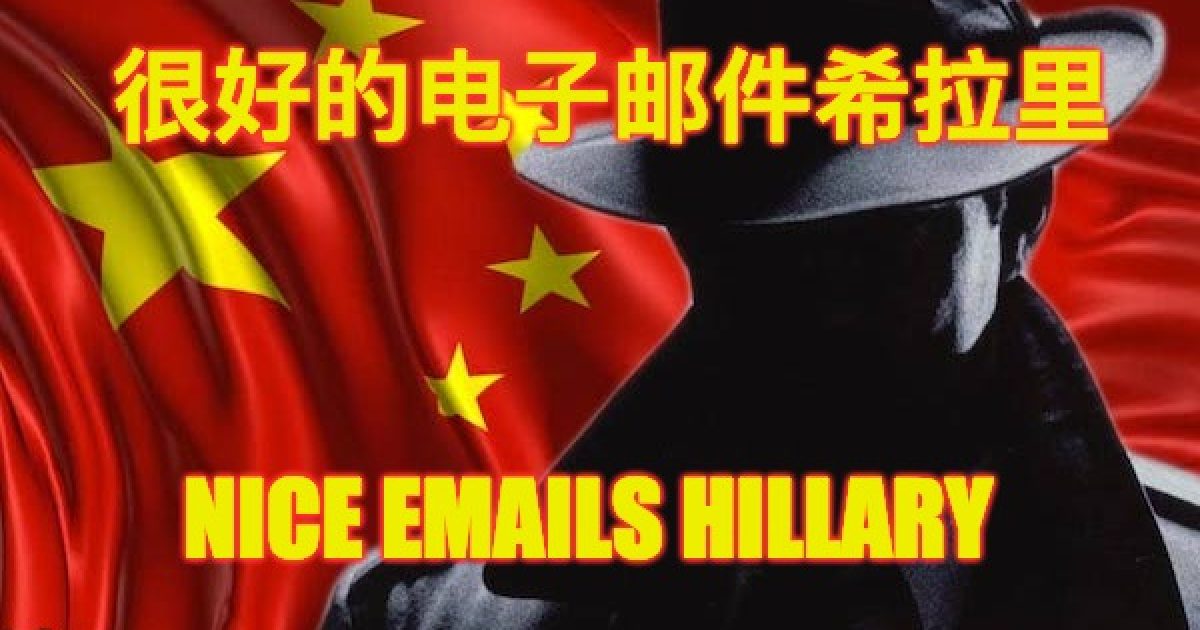 An Epoch Times report confirmed information first revealed by the Daily Caller and Fox News that the Intelligence Community Inspector General (ICIG)  told the “FBI in 2015 that a forensic review of Hillary Clinton’s emails unearthed anomalies in the metadata of the messages. The evidence in the metadata suggested that a copy of every email Hillary Clinton sent during her tenure as the secretary of state was forwarded to a foreign third party.”  Evidence proved the third party was China.

The Daily Caller spoke with a former intelligence officer back in August who said the ICIG “discovered the anomaly pretty early in 2015.”

“When [the ICIG] did a very deep dive, they found in the actual metadata — the data which is at the header and footer of all the emails — that a copy, a ‘courtesy copy,’ was being sent to a third party and that third party was a known Chinese public company that was involved in collecting intelligence for China,” the former intelligence officer told TheDCNF.

“The [the ICIG] believe that there was some level of phishing.But once they got into the server something was embedded,” he said. “The Chinese are notorious for embedding little surprises like this.”

(…) The Intelligence Community Inspector General warned of the problem, but the FBI subsequently failed to act, Texas Republican Rep. Louie Gohmert said during a July hearing.

When Michael Horowitz, the DOJ Inspector General testified before Congress in June 2018 he was asked about the metadata evidence and conceded that he knew about the lead never followed.  Mark Meadows (R-NC) asked why it wasn’t in his report about the FBI’s Clinton Investigation he had issued, and Horowitz said he would get back to the committee with the answer.

Apparently, Meadows believes that the person who led the FBI’s Clinton investigation Peter Strzok, who was fired from the agency last year after his anti-Trump text messages became known,  ignored the lead about the Clinton emails/foreign country,  never following up with the ICIG regarding the information. Nobody at the FBI interviewed anyone from the ICIG’s office.

In fact, according to Meadows, Strzok called the ICIG office 10 minutes after Comey gave his speech exonerating Clinton in July 2016,  and asked them to close out their inspector general’s referral about China hacking into Hillary’s server.

Using its own sources, Fox News confirmed the report:

A source briefed on the matter confirmed to Fox News the details of the Caller’s reporting, and said that the ICIG was so concerned by the revelation that officials drove over to the FBI to inform agents — including anti-Trump agent Peter Strzok — of the development after it was discovered via the emails’ metadata.

The source told Fox News the hack was from a Chinese company, describing it as a front for Chinese intelligence.

A second source briefed on the matter told Fox News that officials outside of the FBI indicated code on the Clinton server suggested a foreign source was receiving copies of emails in real time.

When asked about the significance of the report, Rep Gohmert  (R-TX) told Fox:

“It’s critically important. There are countries that would pay a tremendous amount of money to know what Clinton was saying, doing and thinking through her emails, what she’s doing, who she’s going to meet, what she thought about meetings, not necessarily classified but critically important and those emails were compromised and people like Strzok, when they were briefed, knew this would devastate her chances of being elected and they weren’t about to do anything to hurt those chances.”

.At the time the information was first released in August, the president doubted the FBI would follow up

Report just out: “China hacked Hillary Clinton’s private Email Server.” Are they sure it wasn’t Russia (just kidding!)? What are the odds that the FBI and DOJ are right on top of this? Actually, a very big story. Much classified information!

Hillary Clinton’s Emails, many of which are Classified Information, got hacked by China. Next move better be by the FBI & DOJ or, after all of their other missteps (Comey, McCabe, Strzok, Page, Ohr, FISA, Dirty Dossier etc.), their credibility will be forever gone!

Sadly he was correct. Although it’s five months later, this story hasn’t been covered by the mainstream media nor has the Horowitz report on the FBI’s investigation of Hillary Clinton been revised. This entire thing smells.