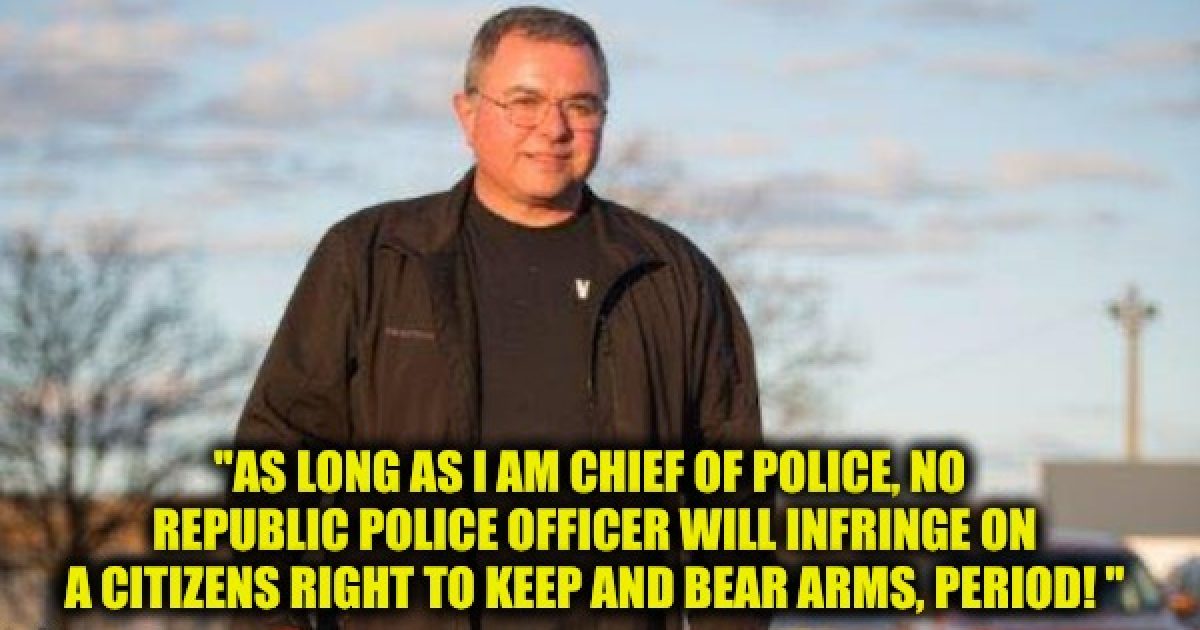 I-1639 was an anti-gun referendum on the Washington State ballot on election day. Thanks to a marketing effort funded via strong financial support from anti-gun billionaires including Michael Bloomberg, Steve, and Connie Ballmer and Nick and Leslie Hanauer, the measure passed on election day with nearly sixty percent of the ballot. One local official,  Republic Police Chief Loren Culp,  is fighting the law by proposing a local ordinance declaring  Republic City a sanctuary city for those who don’t want to obey the new freedom stealing law.

On November 7th, the day after the election and the passage of 1-639 Police Chief Culp wrote on the department’s Facebook page:

I’ve taken 3 public oaths, one in the US Army and Two as a police officer. All of them included upholding and defending the Constitution of the United States of America.

The second amendment says the right to keep and bear arms shall not be infringed.

As long as I am Chief of Police, no Republic Police Officer will infringe on a citizens right to keep and Bear Arms, PERIOD! – Chief Culp

Two days later on the 9th, Chief Culp posted the following on the Police Department’s Facebook page:(emphasis mine)

I can’t make legislation but I can recommend it, which I have. What do you think?

Ordinance Number: __________
An ORDINANCE of the City of Republic, which shall be known and may be cited as the “2nd Amendment Sanctuary City Ordinance.” To prevent federal and state infringement on the right to keep and bear arms; nullifying all federal and state acts in violation of the 2nd Amendment to the Constitution of the United States and Article 1 Section 24 of the Washington State Constitution.
WHEREAS, the City of Republic believes that:

A. The 2nd Amendment to the Constitution of the United States reads as follows, “A well-regulated militia, being necessary to the security of a free state, the right of the people to keep and bear arms shall not be infringed.”

B. Article 1 section 24 of the Washington State Constitution reads as follows, “The right of the individual citizen to bear arms in defense of himself, or the state, shall not be impaired, but nothing in this section shall be construed as authorizing individuals or corporations to organize, maintain or employ an armed body of men.”

C. All federal and State acts, laws, orders, rules or regulations regarding firearms, firearm accessories, and ammunition are a violation of the 2nd Amendment to the U.S. Constitution and Article 1 Section 24 of the Washington State Constitution.

NOW, THEREFORE,
THE CITY COUNCIL OF THE CITY OF REPUBLIC, WASHINGTON STATE, DO ORDAIN AS FOLLOWS:

SECTION 1: PROHIBITION ON STATE AND FEDERAL INFRINGEMENT OF THE RIGHT TO KEEP AND BEAR ARMS

B. No agent, employee, or official of the City of Republic, or any corporation providing services to the City of Republic shall provide material support or participate in any way with the implementation of federal or state acts, orders, rules, laws or regulations in violation of the 2nd Amendment to the United States Constitution and Article 1 Section 24 of the Washington State Constitution.

C. Nothing in this Ordinance shall affect City Ordinance 94-05 which prohibits, for safety reasons, the discharge of firearms in the City limits except in the defense of self or others.

SECTON 2. REQUESTED INVOLVEMENT OF NEIGHBORING COMMUNITIES
The City of Republic calls upon other local jurisdictions within the State of Washington to join us in this action by passing a similar ordinance.

SECTION 3: URGING ACTION BY THE STATE GOVERNMENT
The City of Republic requests that copies of this ordinance be immediately transmitted to each individual legislator that represents our district in the State government urging each to introduce similar legislation on a state level during the next legislative session.

SECTION 4: SEVERABILITY CLAUSE. If any provisions of this ordinance or its application to any person or circumstance are held invalid, the remainder of the Ordinance, or the application of the provision to other persons or circumstances is not affected.

SECTION 5: EFFECTIVE DATE. This Ordinance shall become effective from and after the date of its passage by the City Council, approval by the Mayor and five (5) days after publication as required by law.

I-1639 strips young 18-to-20-year-old adults of their Second Amendment rights on the argument that, “studies show that eighteen to twenty-year-olds commit a disproportionate number of firearm homicides in the United States and research indicates that the brain does not fully mature until a later age.” I know some 60-year-olds who haven’t fully matured. Basically, the initiative tells 19-year-olds  “Hey, we think you’re old enough to join the military and maybe lose your life in combat, but you’re too stupid to buy and responsibly own a firearm, so we want to take  away a fundamental right.”

The billionaire-backed initiative also requires a ten-day waiting period, registration of all semi-auto rifles and annual background check review of owners, so-called “secure storage,” and a waiver of medical privacy by anyone wanting to purchase such a firearm:

Among the more egregious provisions of the measure,  is that it broadly encompasses all semiautomatic rifles, including widely popular .22-caliber rimfires such as the Ruger 10/22, Marlin Model 60, Browning SA-22 and Winchester Model 74. Those are popular “first guns” for young hunters and recreational shooters. Here’s the definition of a “semiautomatic assault rifle” found at the bottom of Page 27:

One can bet that a lot of those affected .22-caliber rifles were in use during this fall’s hunting seasons for grouse and rabbits, which opened this  Sept. 1.

While the police chief’s ordinance hasn’t yet been presented to the City Council (it will be presented this coming week), Culp says he doesn’t need the approval to carry out his new policy.