Murkowski Slams Her Attack On Roberts 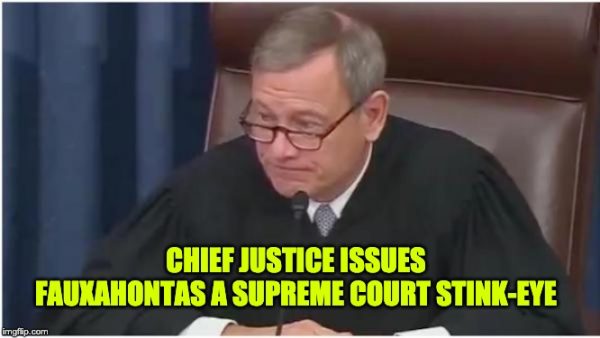 She shows such ‘leadership’ that even an impartial judge doesn’t like her. Good goin’, Liz! Chief Justice Roberts

The Democrats have doubled down on partisan rhetoric so many times, they don’t even hear how dumb their arguments sound.

Maybe getting the stinkeye from a Chief Justice might help Pinnochiohontas put it back into some kind of perspective.

But probably not. She’s a Democrat, after all. They tend not to let facts get in the way of their feelings.

Here’s what she said to piss of Chief Justice Roberts so thoroughly.

WOW. Chief Justice John Roberts just had to read aloud Sen. Elizabeth Warren's question…about whether he loses credibility for presiding over a trial without witnesses or evidence. https://t.co/vG08pjmhZH pic.twitter.com/G79ZdRljZj

This is how Chief Justice looked at Warren for a solid 5+ seconds after reading the question https://t.co/vG08pjmhZH pic.twitter.com/62XXEhuHI1

Like spitting on the ump at a baseball game. Great winning strategy.

If looks could kill, she’d be dead now.

What in the actual hell was Liz thinking?

Let’s throw shade at the Judge and see how that works out for me?

Yup. There’s the winning diplomatic mind the world needs to see in the White House.

If she didn’t already know she’s pooched, that glare should have cinched it.

Then again, why would we really expect her to clue in?

We ARE talking about Elizabeth Warren, after all.

I wonder if the leaders of the Cherokee nation sent Roberts a telegram reminding him that Warren’s claims of being a Cherokee were bogus, just in case they ever have something before the court…Dear Cheif Justice,  please don’t blame us, we don’t like her either.

Uh-oh,  Fauxahontas’  latest campaign pledge is to criminalize Internet free speech–She wants to jail people who she believes are posting “disinformation” on the Internet. Will she have us thrown in prison?

Perhaps the best reaction came from Alaska Senator Lisa Murkowski. In her statement announcing she was going to vote against more witnesses in the Senate impeachment trial, she slammed Warren for trying to attack the Cheif Justice.

“\“It has also become clear some of my colleagues intend to further politicize this process, and drag the Supreme Court into the fray, while attacking the Chief Justice. I will not stand for nor support that effort. We have already degraded our institution for partisan political benefit, and I will not enable those who wish to pull down another.

“We are sadly at a low point of division in this country.”