Is Chelsea Clinton Just Plain Stupid Or Did She Forget Who Her Parents Are? 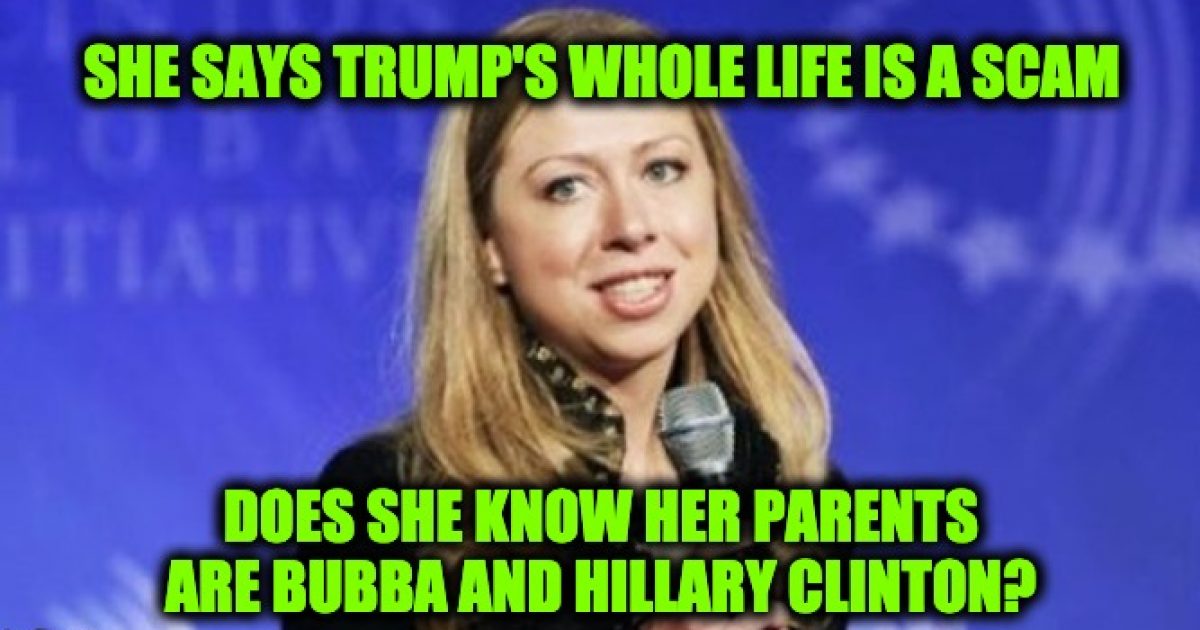 Chelsea Clinton’s latest dive into stupidity is mocking Trump, saying the President’s whole life has been a scam. SCAM? Whole life??? Did she forget who her parents are? Chelsea Clinton parents

Perhaps she does it just to get attention, and in a way, I feel bad for her, after all, Chelsea Clinton’s mom seems to obsess about losing in 2016 more than she cares about her,  and her father seems to want to grope, rape, or sleep with every  woman within arm’s reach. But on the other hand, one would think by now, a supposedly bright woman like Chelsea Clinton would realize that every time she says something crazy, she is going to be attacked by much of the twitter world. Perhaps she isn’t just isn’t bright, and her intelligence is just another fake story by the mainstream media.

Last week, the former First Daughter responded to a tweet by the President in which he declared the latest impeachment effort by Democrats to be “the greatest scam in the history of politics.”

“Yes, you are,” Chelsea responded.

While discussing Trump with the ladies of ‘The View,’ Chelsea expanded on the idea that Trump’s life is one big scam on the American people.

“He’s the greatest scam in American political history,” she said. “I think his whole life has been a scam, and I think unfortunately people are suffering every day because his scam has thus far kind of succeeded at the highest level.”

Does Chelsea know who her parents are?  She’s the daughter of a family that built their entire career on political lying, and covering up Bubba’s sexual assaults is accusing somebody else of being a scammer.

It comes as no surprise that the daughter of the woman who proudly declared Trump’s supporters were ‘deplorable’ would now say they’re too stupid to realize they’ve been conned.

Chelsea Clinton on Trump: 'His whole life has been a scam' https://t.co/SIVRZztJiB >> Two words: Your Mother.

And declaring somebody else to be a scam when her most significant accomplishments to date is using her last name to earn high-profile positions at consulting firms, NBC News, and her family’s Clinton Foundation, rather than earning such roles through hard work, is rather rich.

Take away her wealth privilege and she would be a welfare mom living in a single-wide outside Little Rock with 4 kids from 3 different men.

Drop Donald Trump into a trailer park and within 2 weeks his place would look like this: pic.twitter.com/NQgEwgiUPn

You, your mother, and your father run a $2.5 billion foundation scam.

You should sit this one out.

Chelsea and her mother, the latter of whose greatest accomplishment leading up to the 2016 election was her ability to open an already loosened pickle jar, are currently making the media rounds to promote a project titled “The Book of Gutsy Women.”

On that tour, Hillary said her greatest achievement in life was to stand by her husband despite numerous affairs and allegations of sexual assault.

Yet, the media consistently portrayed her as the most qualified presidential candidate in the history of American politics. Now that’s a scam!

She looks like a privileged woman with zero accomplishments the left/media is desperately trying to make "a thing."https://t.co/Xzz6OT2RyS

Adding to the scam that is the Clinton legacy, Hillary and Chelsea are expected to launch a film, and television production company focused on women’s issues.

Entering the entertainment industry, producing works of fiction, should be a natural transition for a family that lies with such ease.

Chelsea frequently takes potshots at President Trump, with this being the latest example. She has previously suggested Trump “degrade[s] what it means to be an American,” and blasted his supporters as racists, misogynists, and hateful people who are instigators of violence.