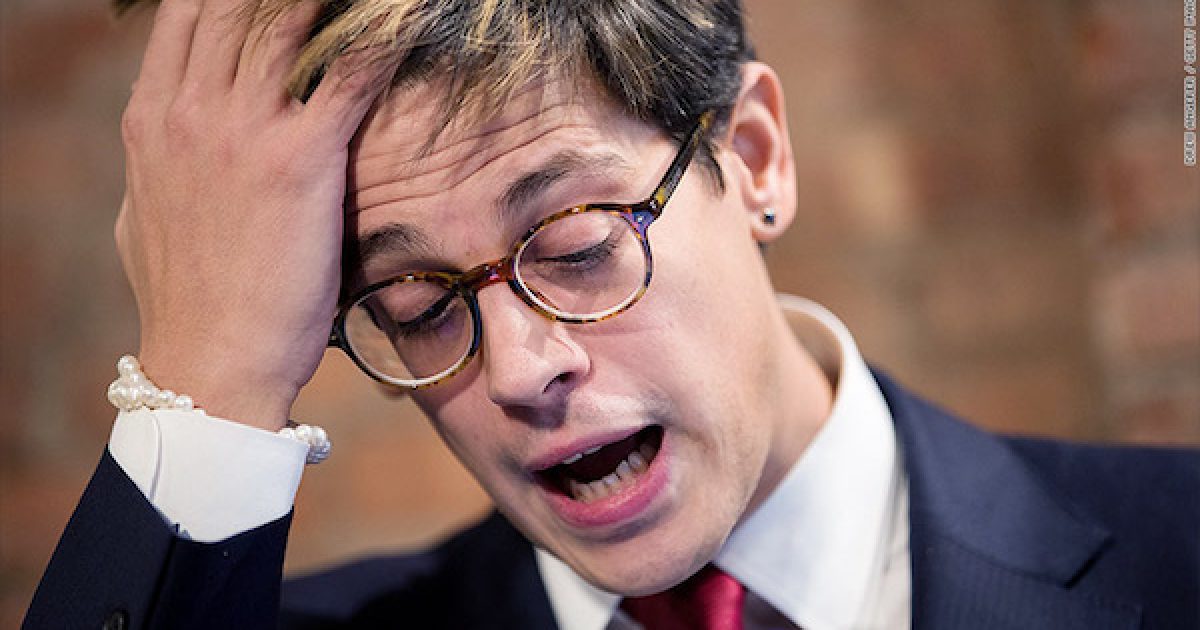 Chalk this up to liberal “tolerance.” On Saturday, conservative, gay, Jewish writer Milo Yiannopoulos was forced to leave a New York bar by a group chanting, “Nazi scum get out.”

According to The Hill, videos revealed the chanting group were members of the Democratic Socialists of America. A report by Jon Levine at The Wrap said that “several journalists from left-leaning outlets like The Nation and Gizmodo” were also involved. The Hill report did not identify the journalists involved in the incident.

“Me and Milo’s gay lunch in Manhattan was disrupted when a hoard of chanting, screaming leftists wouldn’t let us go back to our table to eat. They blocked us then pushed Milo and it was getting violent. We had no back up on hand and so peacefully left. The staff seemed embarrassed,” Chadwick Moore said in a tweet.

Me and Milo’s gay lunch in Manhattan was disrupted when a hoard of chanting, screaming leftists wouldn’t let us go back to our table to eat. They blocked us then pushed Milo and it was getting violent. We had no back up on hand and so peacefully left. The staff seemed embarrassed

I was just shoved and screamed at by a big group in a pub in Manhattan and forced out of the place. One of them was a reporter for Gizmodo. They were screaming at the top of their lungs about ‘Nazis’ and ‘KKK’. Initially I was going to stay put obviously but they blocked me from my table and my bag and yelled at me to leave and it was about to escalate into something ugly.

It rattled me a little bit (just slightly!), perhaps because I have something to lose in life now. My first thought was John and not getting myself hurt or killed. I don’t know how I’d explain to my black husband that I got hurt for being a ‘white supremacist’. I didn’t have security with me so I had to just get out of there.

I won’t name the place we were at because the staff were really understanding and cool about it. But jeez. It’s now impossible for me to safely go out for lunch in most major cities in America because I supported Trump at the last election and don’t like feminism.

Here’s a video of the incident:

Since the 2016 election, increasingly insane leftists have determined that anyone with whom they disagree is either a “Nazi” or a Russian bot. And this time they picked on an immigrant who is Jewish.

This, by the way, is the modern Left.  Let that sink in.