The Most Essential “Effing” Charles Krauthammer Column Ever 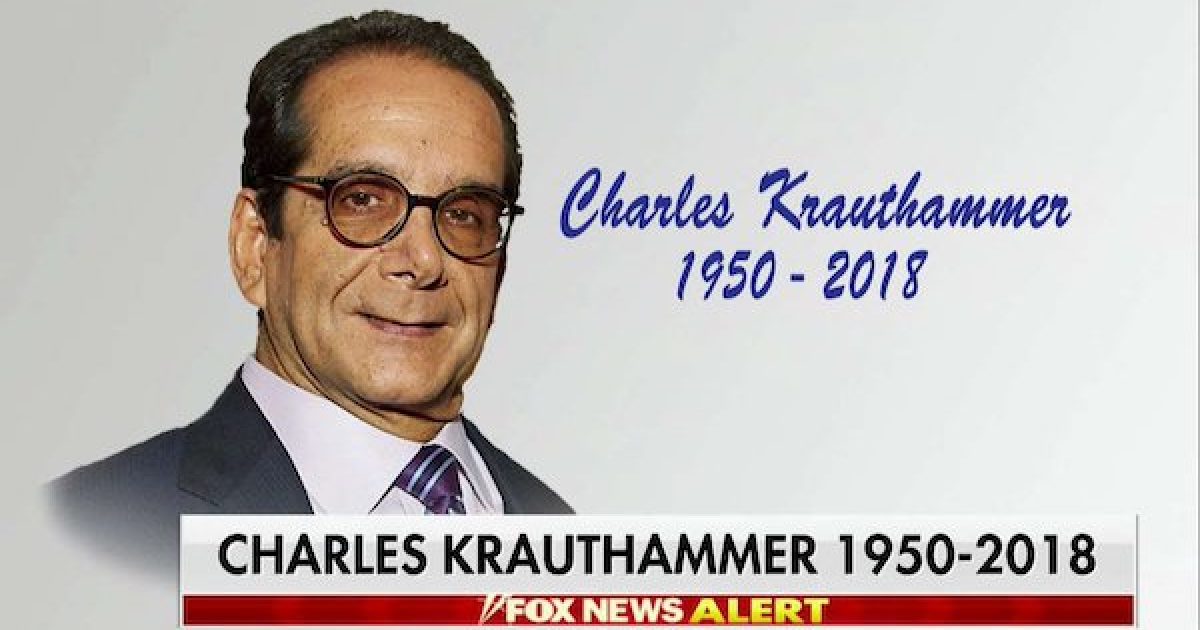 The announcement of the death of Charles Krauthammer yesterday saddened me greatly.

I always appreciated Charles Krauthammer’s incredibly insightful commentaries always written with grace and genius, and of course, his regular appearance on FNC’s Special Report. While I never met him personally, I appreciated him as someone who made me think, and someone with whom I would have loved to have a beer.  One of the best things about Charles was his sense of humor which was drier than the Sahara.

One of my favorite examples is the column below written fourteen years ago. Only Charles Krauthammer could eviscerate liberal over-reactions and defend the “F” word at the same time and make it sound classy. But then again he was an effing genius.

In Defense of the F-Word

I am sure there is a special place in heaven reserved for those who have never used the F-word. I will never get near that place. Nor, apparently, will Dick Cheney.

Washington is abuzz with the latest political contretemps. Cheney, taking offense at Sen. Pat Leahy’s imputation of improper vice presidential conduct regarding Halliburton contracts in Iraq, let the senator know as much during a picture-taking ceremony on the floor of the Senate. The F-word was used. Washington is scandalized.

The newspapers were full of it. Lamentations were heard about the decline of civility. The Post gave special gravitas to the occasion, spelling out the full four letters (something that it had done only three times previously). Democrats, feeling darned outraged, demanded apologies. The vice president remained defiant, offering but the coyest concession — that he “probably” cursed — coupled with satisfaction: “I expressed myself rather forcefully, felt better after I had done it.”

The Federal Communications Commission just last year decreed that the F-word could be used as an adjective, but not as a verb. Alas, this Solomonic verdict, fodder for a dozen PhD dissertations, was recently overturned. It would not get Cheney off the hook anyway. By all accounts, he deployed the pungent verb form, in effect a suggestion as to how the good senator from Vermont might amuse himself.

Flood-the-zone coverage by investigative reporters has not, however, quite resolved the issue of which of the two preferred forms passed Cheney’s lips: the priceless two-worder — “[verb] you” — or the more expansive three-worder, a directive that begins with “go.”

Though I myself am partial to the longer version, I admit that each formulation has its virtues. The deuce is the preferred usage when time is short and concision is of the essence. Enjoying the benefits of economy, it is especially useful in emergencies. This is why it is a favorite of major league managers going nose to nose with umpires. They know that they have only a few seconds before getting tossed out of the game, and as a result television viewers have for years delighted in the moment the two-worder is hurled, right on camera. No need for sound. The deuce was made for lip reading.

Which makes it excellent for drive-by information conveyance. When some jerk tailgater rides my bumper in heavy traffic, honking his horn before passing and cutting me off, I do a turn-to-the-left, eyeball-to-eyeball, through-the-driver’s-window two-worder — mouthed slowly and with exaggerated lip movements. No interlocutor has yet missed my meaning.

Nonetheless, while the two-worder has the directness of the dagger, the three-worder has the elegance of the wide-arced saber slice. It is more musical and, being more clearly spelled out, more comprehensible to the non-English speaker (a boon in major urban areas). It consists of a straightforward directive containing both a subject and an object — charmingly, the same person.

According to The Post, the local authority on such matters, Cheney went for a variant of the short form, employing the more formal “yourself.” And given the location, the floor of the Senate, it seems a reasonable choice: Time was short, and he undoubtedly reserves the right to revise and extend his remarks.

Ah, but the earnest chin-pullers are not amused. Cheney’s demonstration of earthy authenticity in a chamber in which authenticity of any kind is to be valued has occasioned anguished meditations on the loss of civility in American politics. Liberals in particular have expressed deep concern about this breach of decorum.

Odd. The day before first reports of Cheney’s alleged indiscretion, his Democratic predecessor, Al Gore, delivered a public speech in which he spoke of the administration’s establishing a “Bush gulag” around the world and using “digital brown shirts” to intimidate the media. The former vice president of the United States compared the current president to both Hitler and Stalin in the same speech — a first not just in hyperbole but in calumny — and nary a complaint is heard about a breach of civility.

If you suspect that this selective indignation may be partisan, you guessed right. But here’s an even more important question. In the face of Gore’s real breach of civil political discourse, which of the following is the right corrective: (a) offer a reasoned refutation of the charge that George Bush is both Stalinist and Hitlerian; (b) suggest an increase in Gore’s medication; or (c) do a Cheney.

The correct answer is “C.” And given the circumstances, go for the deuce.

Rest In Peace, Charles Krauthammer. I am sure right now your older brother is introducing you to the friends he’s made since he passed. May God protect your soul, and may he comfort your entire family, and all your friends, and even your fans who will miss you greatly.