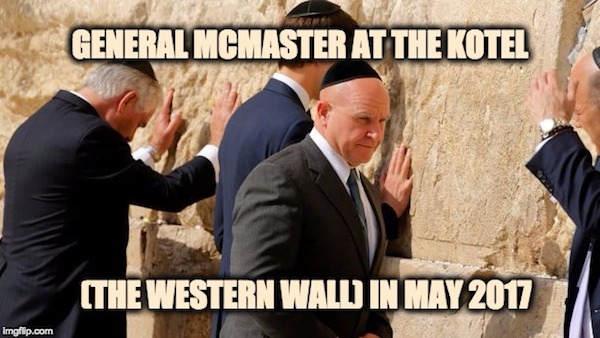 Two weeks ago Caroline Glick wrote that National Security Adviser, Lieutenant General H.R. McMaster was, ‘deeply hostile to Israel and to Trump,” a charge that is entirely false.

Her post was widely shared and quoted. Others have added to the story and have piled on, including the Atlantic, Breitbart, and even the Zionist Organization of America. All of the reports rely on anonymous hearsay and personal assumption without looking at speeches he might have made about Israel, nor do the articles attempt to ask the people who should know—senior Israeli officials who worked with the general throughout his career.

In the following paragraphs, you will see why the attacks are at their core illogical, and that they use false assumptions. You will also hear from senior Israeli officials who know the General and believe the charges to be ridiculous.

Let’s get out of the way the question of McMaster being hostile to President Trump. Does anyone really believe that a president who almost fired his Attorney General (who is arguably his most loyal supporter in the administration) for an act he perceived as a mistake, would retain any cabinet officer who was hostile to him? Or even one who disagreed with his campaign promise to be supportive of Israel (unlike the previous administration)? Allow me to add this question.  Does anybody really believe that a decorated soldier who has served in the Army for thirty-three years (and still serves), a soldier who earned the level of a three-star general got there by trying to sabotage his commanders? Would that same decorated soldier sabotage his commanders now? If he truly disagreed with Trump’s policies he would resign not countermand Trump’s orders.

One of the new claims is that it was McMaster who pushed the POTUS not to allow Israeli officials accompany him to the Kotel during his May trip to Israel (the Western retaining wall of the Temple Mount). Back in May, all of my sources blamed it on left-over Obama officials at the U.S. Embassy and most other reporters said the same thing.

But in Ms. Glick’s recent post, without any evidence, she now says it was McMaster, and even claims that he tried to stop the president from going to the Kotel at all. Her source was “senior officials.” Okay, name one.  I am afraid that Ms. Glick is relying on anonymous officials who have no desire to leak the truth but instead have an agenda against General McMaster.

Ms. Glick’s post is being used because it was the one that started all the false charges. Most of her post relies on personnel changes by various White House officials. Supposedly the General purged the National Security staff of Israel supporters and/or people who wanted to get tougher with Iran.

In May, Adam Lovinger, a pro-Trump national security strategist on loan from the Pentagon’s office of net assessment, was summarily informed that his security clearance was revoked. He was fired and escorted from the White House like a spy and put on file duty at the Pentagon.

Time for some truth. Firstly, Adam Lovinger wasn’t escorted from the White House as a spy; everyone who gets fired gets escorted out, that’s what happened to Anthony Scaramucci, after he was booted from his short stint as communications director.

The biggest issue with the false charges regarding Lovinger’s exit is that General McMaster didn’t fire him, Defense Secretary General Mattis did (does she believe all Generals look alike?). The Washington Free Beacon reported that Lovinger’s firing was initiated by the Defense Department. The rationale given to Adam Lovinger via  a memo from Barbara Westgate (the director of the Pentagon’s Washington Headquarters Services):

“I have concerns regarding your judgment, trustworthiness, and reliability while carrying out your official duties, specifically relating to your personal conduct, misuse of Information Technology systems, outside activities and your improper handling of and safeguarding of protected information,” the memo from Westgate stated.

Judicial Watch added that Mr. Lovinger sent out scathing memos criticizing his DOD boss James H. Baker (he’s not the same guy as the Bush #41 Secretary of State, neither is the James A. Baker who works at the FBI). Try sending out memos bashing your boss and see what it does to your tenure.

For example, Higgins wrote about what he called, Global Corporatists and Bankers, “Exploitation of populations, unfettered by national protections and notions of personal morality and piety” sounds like it was straight out of Occupy Wall Street.

The memo employs similar stereotyped arguments directed toward the rest of his targets. Not one of them belongs on a memo sent to the President of the United States by a member of the NSC. Especially an NSC member whose responsibility is military strategy.

If the president needed conspiracy theories and stereotypes from his NRC, I could recommend to him some extreme leftist bloggers. However the president wants rational “out of the box” thought, then General McMaster’s firing of Mr. Higgins was good for the country. But if one asks a McMaster attacker, Higgins was fired because he was an “Iran Hawk.”

The McMaster criticism mentions others who were removed from the NSC staff, some still work for the White House in other capacities. All those who were booted from the NSC had one thing in common, they were all appointed by Trump’s first National Security Advisor, General Flynn. In other words, General McMaster made personnel changes to load the NSC with people he trusted and who trusted him-something done by most new presidential appointees. No one complained that Anthony Scaramucci was anti-Israel when he started purging the communications staff of people loyal to Reince Priebus before he was escorted off the grounds.

Even before he became the National Security Adviser, McMaster showed himself to be friendly to Jewish issues. A great example was recently published by the Algemeiner, “On August 26, 2012, McMaster spoke at the dedication of a new Holocaust exhibit at the National Infantry Museum at Fort Benning in Georgia. The transcript of his remarks includes his mention of the importance of remembering the Holocaust.”

In the speech, posted on the site Algemeiner, General McMaster relates the deep emotional experience he had during his third trip to Yad Vashem. His words weren’t those of a man saying what he was directed to say. The general talked emotionally about how Yad Vashem made his knees weak, the horrors of what American soldiers found when they liberated the camps, and why it is important to use force to stop such a Holocaust if it was ever tried again.

There are other examples of McMaster making pro-Israel speeches; for example, the one he gave on the 50th anniversary of the Six-Day-War where he praised the IDF for changing the way wars are fought.

Perhaps though, the best evidence of General McMaster and his stance on Israel are the endorsement’s he has received from Senior Israeli officials who had the opportunity to know him and work with him. Unlike those who say he is anti-Israel, these Israeli officials have given their support publicly and allow their names to be used.

When McMaster was appointed by President Trump, NRG (an Israeli news website) quoted Dr. Eitan Shamir, whose service to Israel included being in charge of the “National Security Doctrine Department at the Ministry of Strategic Affairs, Prime Minister Office. Before joining the Ministry, he was a Senior Fellow at the Dado Center for Interdisciplinary Military Studies (CIMS) at the IDF General Headquarters.”

Dr. Shamir has known General McMaster for about a decade, ever since the General read his book “Transforming Command,” and contacted him. Shamir describes McMaster as:

“a very warm person, and the first time he saw me, he hugged me and said that my book fell out of the sky, and since then we have maintained regular contact, including meetings in Israel and the United States.” Written before the present charges contending he is not a friend of the Jewish State, Dr. Shamir added, “He has had many Israeli friends besides me and I remember an event that mentioned Israel as an ally fighting with the United States like Canada, I have no doubt that he loves Israel very much”

Answering an email from this reporter inquiring if anything changed since that February NRG piece, Dr. Shamir verified that nothing has changed and he added:

He always made supportive statements on the IDF and Israel, moreover he made several visits with his unit to Israel sharing important military lessons

Published in the Jerusalem Post on Sunday was an article about General McMaster which was written by Maj. Gen. (res.) Yaakov Amidror and Col. (res.). Each has impeccable credentials. Gen Amidror is the former National Security Advisor of Israel and former head of the Research Department of Israeli military intelligence. Co. Lerman is a former Deputy National Security Adviser for Foreign Policy and International Affairs who also served in the IDF Directorate of Military Intelligence

In the article, the two senior officials wrote of the anti-Israel charges:

But such an attack is not mere opinion; it is an offense against the truth, against basic decency and against the best interests of Israel as we see them. In the opinion of many in the professional Israeli defense establishment who have come to know Gen. McMaster over the years, directly and indirectly, the general is a friend.

Israeli officers and scholars who have worked with McMaster say that he was always highly appreciative of Israel and of its contributions to the security of the US. They attest to his broad support for and admiration of the IDF. It is absurd to assert that all these years, hidden underneath McMaster’s friendliness was a grudge against Israel that the general is now free to act on. We reject this churlish insinuation. And whatever the reasons may have been for his decision to relieve certain senior National Security Council officials of their duties, anti-Semitic or anti-Israeli sentiments were certainly not part of the calculus.

Israelis and friends of Israel in the US do not need to agree with every position McMaster has taken, nor should the general be immune to specific policy criticism, such as the Trump administration’s failure to put forward coherent policies on Syria or Iran. But McMaster is not an enemy. It is wrong to assault his personal reputation, especially when the attack is based on hearsay and driven by parties with an axe to grind.

Most administrations are plagued by officials who try to oust their colleagues by leaking false charges about them. These charges that General Mc Master is anti-Israel seem to be part of a larger attack on General McMaster by people in the administration who disagree with him on some issues. The goal is to force him out of office.  Labeling General McMaster as anti-Israel not only hurts the general with American Jews but much more important is that it damages the General’s support with one of President Trump’s most important voting blocs, the evangelical Christians.

UPDATE Sheldon Adelson has come out in support of National Security Adviser H.R. McMaster, disavowing a campaign against McMaster by a group Adelson funds, the Zionist Organization of America.

Andy Abboud, who represents Adelson, tells me: “Sheldon Adelson has nothing to do with the ZOA campaign against McMaster. Had no knowledge of it. And has provided zero support, and is perfectly comfortable with the role that McMaster is playing.”

Why this matters: Adelson is one of the biggest financial donors in Republican politics, and his influence over national security and Israel-related matters is substantial. His is a voice listened to by President Trump and other senior White House officials like Jared Kushner.