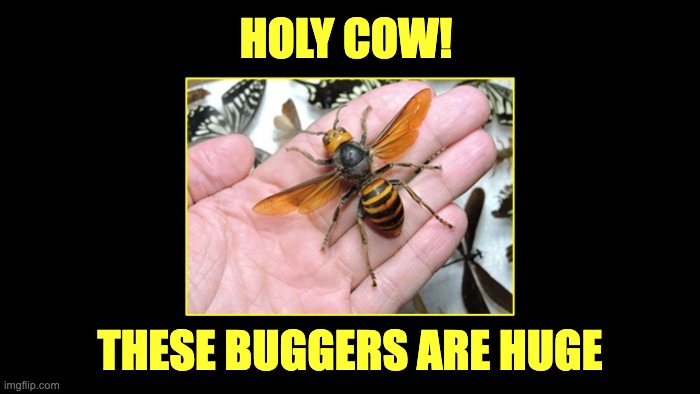 changing the hornets name
In May 2020, many Americans went nuts over giant hornets with highly toxic venom. They are the largest hornets in the world, ranging from 1½ to 2 inches long (not including the stinger, which adds another inch). They were named Asian Murder Hornets. Their science name was Vespa mandarinia.

Because these giant bugs are native to Asia, they were named Asian Murder Hornets. Their science name was Vespa mandarinia. The operative word is were because woke crazies decided the Asian part of their name was racist. The Entomological Society of America (ESA) has announced a new name. They will now be called the Northern Giant Hornet.

Chris Looney, an entomologist at the Washington State Department of Agriculture, recommended the name change.

[The name Asian Murder Hornet] “is at best a neutral and uninformative adjective, potentially a distraction from more salient characters of the organism, and at worst a racist trope.”

Loony (an appropriate name) also said, “connecting Asia and a nervous-making insect feeds racist fears, Looney argued. He warned about a recent “rise in hate crimes and other odious behavior directed at people of Asian descent in countries across the globe.” He has heard multiple grumblings about the hornet as “another” unwelcome “thing from China.”

“I don’t want my Asian American or Pacific Islander colleagues, friends, and family to have any negative connotations with invasive or pest species that might be used against them in a negative way,”

There is no word that scientists are considering changing the names of “black holes” or Mexican jumping beans. There is a rumor that toy makers have decided to rename Chinese Checkers and let’s not talk about the Jew’s harp.

To be honest, one part of the name change, removing the murder part, makes sense. In most states, any nests of murder hornets will not be allowed to be captured. Attorneys General usually ensure that all murderers are immediately released.