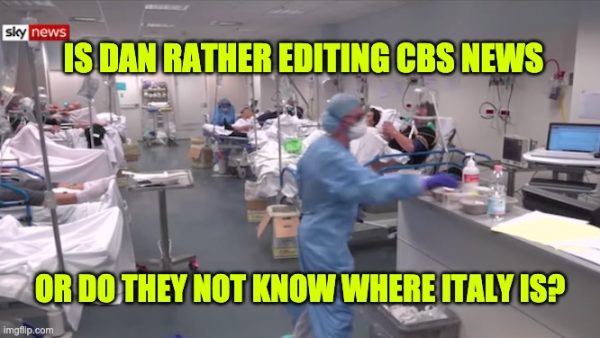 Here we go again.  Continuing in the CBS tradition of fake news established by Dan Rather during the 2004 presidential election—in their rush to find ways to tell Orange Man Bad stories, CBS news aired footage from Italy and said it was from U.S. to ramp up American’s fear level about the CoronaVirus–AGAIN! CBS caught again

CBS News has again been caught slipping in footage of patients from a hospital in Italy in their coverage of the coronavirus here in the United States. Last time they ran the footage from Italy and said it was New York, this time Pennsylvania.

“In Pennsylvania, cases are skyrocketing at the rate of 1,000 a day,” the narrator states as the camera pans across a hospital room in a report on April 4th. “Governor Tom Wolf is appealing to citizens to help.”

The problem is that particular hospital room first appeared in footage from Sky News discussing the coronavirus “in northern Italy” weeks ago.

Here is the footage from the CBS Weekend News report in question:

After @CBSNews was called out for airing footage of a hospital in Italy and saying it was New York, they apologized and said it was an error.

Less than a week later, they aired the same footage, this time when talking about Pennsylvania.

At least they are consistent. Hey, everybody makes mistakes, right?

So we could cut CBS some slack for an innocent oversight, right?

Well, no. Maybe we could have cut CBS slack for the first time. But after the first time they screwed up, they should have thrown out the tape. No reputable news outlet (if there are any) would make that mistake twice in two weeks.

Perhaps they don’t have the cash to send a cameraman to take a video of a Pennsylvania hospital. Either that or maybe they hired Dan Rather to be their news editor.