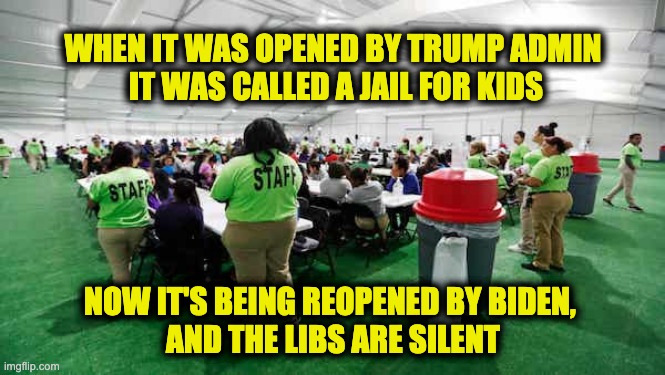 Heck, they’re not even calling it an “immigration jail for children” or “detention center” anymore. Now it has a longer, more PC-type name, “an overflow facility for unaccompanied migrant children.”

When the facility first opened, Congressman Joaquin Castro (D-TX) said, “All of this is part of a morally bankrupt system.” Rep, Castro has been silent about Biden’s re-opening.

Under Trump: Kids in cages

The Biden administration plans to reopen a facility to house unaccompanied migrant teens that the Trump administration closed. The facility in Carrizo Springs, Texas can house up to 700 children at a time. Officials are bracing for a possible surge in attempted border crossings. It is not clear if the media will criticize Biden as they did Trump.

Back in 2019, The Guardian reported on the closure of Carrizo Springs, and it’s quite enlightening.

Carrizo Springs opened at the site of a former oil field camp and was supposed to help HHS take in children who were otherwise detained by the US border patrol in sometimes squalid conditions.

But the facility opened just as border crossings have fallen, after crackdowns by the US and Mexico on migrants traveling through Mexico and applying for asylum in the US. HHS has also sped up its processing of legal cases, in order to release children from detention faster, so they can join sponsoring families in the US while their cases proceed through the immigration system.

News of the closure was welcomed on Tuesday by Amnesty International USA, which believes the border crisis has been “manufactured” by the Trump administration and that detention facilities should be shut down and only utilized as the last resort.

“The closure of the Carrizo Springs facility makes clear the crisis is of the government’s own making. These temporary emergency facilities arose because of the government’s deliberate policy to punish children, resulting in the prolonged and indefinite detention of thousands of children,” said Denise Bell, researcher for refugee and migrant rights with the organization.

She added: “Temporary emergency shelters are never a home for children, and Carrizo and other detention facilities like it only demonstrate that these disastrous policies only endanger children and are never, ever in the best interests of the child.”

So… does this mean that the reopening of the “overflow facility for unaccompanied minors” is a “crisis of the re-Bama government of Joe Biden’s own making?

In which “kids in cages” under Trump becomes “reopening overflow facilities” under Biden. https://t.co/n9ukWaqmi2

We’re asking for our friends in the media who probably aren’t clear on how to handle this story because reporting the facts isn’t convenient right now.