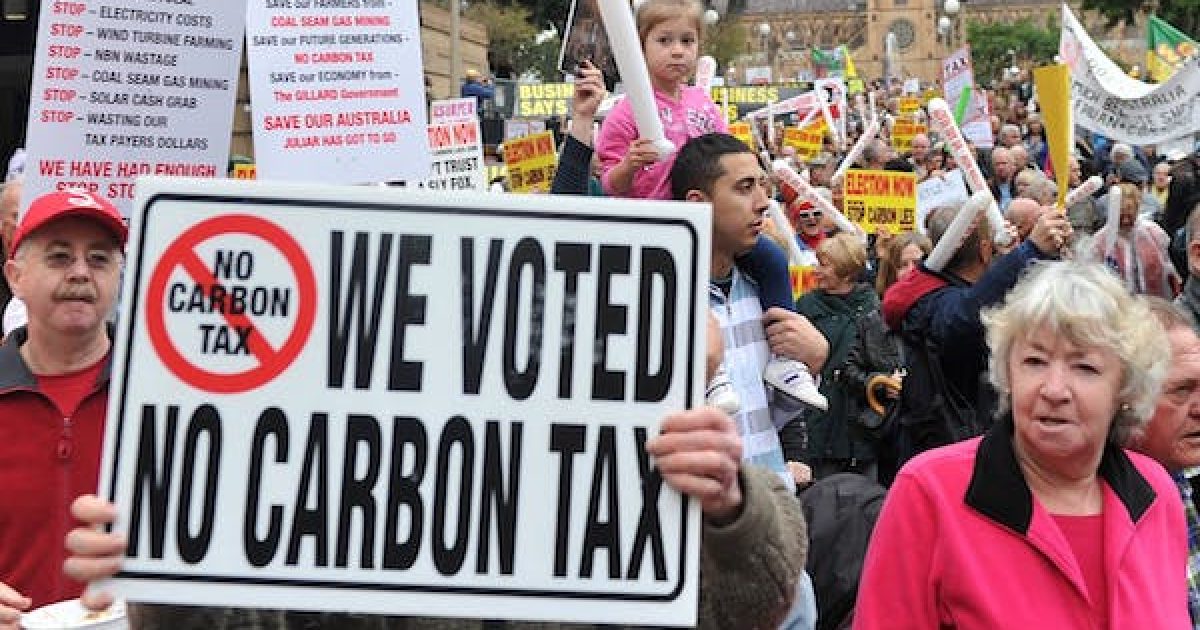 Most legislation especially the liberal bills tend to have really awful unintended consequences. That’s because their primary purpose is to change human behavior. Except humans aren’t always predictable. That’s what happens with Carbon Taxes. Instead of forcing the use of carbon-based fuels to diminish, economists say carbon taxes cause an increase the CO2 in the atmosphere.

As the hysteria over global warming heats up, carbon taxes have become the “cool” option. Environmentalists love them. So do politicians, who are more than happy to raise taxes while scoring political points.

Carbon taxes, or other analogous pricing schemes, are now prevalent in Western Europe, and are making headway in North America—California recently joined forces with the Canadian Provinces of Ontario and Quebec to create an integrated cap-and-trade carbon market.

Also, many well-known economists support carbon taxes. A relatively new report, written by thirteen leading economists under the direction of professors Nicholas Stern and Joseph Stiglitz, recommends the adoption of a global carbon tax. The tax would value carbon emissions somewhere between 50 and 100 USD per ton by 2030 and would cost upwards of $4 trillion. Theoretically, the tax would raise the cost of using carbon-intensive sources of energy, thereby nudging producers to switch from fossil fuels to “green energy” sources.

Theoretically, this makes sense, but reality’s a bitch.

Carbon taxes are just that: taxes. They’re a money-grab disguised with good intentions. Worse still, carbon taxes will not reduce our greenhouse gas emissions. Instead, adopting them in the West will actually raise global carbon emissions by offshoring economic activity from environmentally-friendly places, like the USA, to places with lax environmental laws, like China.

Wealth is like water: it flows to the lowest possible point and continues to do so until the level is equal. This is why consumers chase cheaper goods, why investors look for undervalued companies, and why multinationals offshore to cheaper markets. This last point—offshoring—is why Western carbon taxes will actually increase global emissions.

The underlying logic is fairly straightforward. Pretend there are only two countries in the world: Germany and China. The cost of doing business in them is identical, however, China’s economy is twice as carbon-intensive as Germany’s. In other words, it costs $1 to build a widget in either country, but the widget’s carbon footprint in Germany is only 1 kilogram of carbon, compared to 2 kilograms in China. Clearly it’s better for the environment if widgets are made in Germany.

But Germany’s not satisfied: they want to further reduce their carbon emissions. Therefore, they impose a carbon tax of 10 percent per widget. This raises the cost of making widgets in Germany to $1.10. Ideally, German widget-makers will invest in energy-efficient machinery, and the government can use the tax revenues to plant more trees.

Sadly Germany’s politicians forgot something: Germany is an open market. This means that German consumers can simply buy Chinese widgets—which still only cost $1 to make. At this point, Germany’s widget-makers have two options: (1) they can foreclose, since they’re unable to compete with artificially cheaper Chinese widgets, or (2) they can move their factories to China and import the widgets back into Germany. Either way, China ends up building enough widgets for both China and Germany, and Germany doubles its carbon emissions.

Now imagine what our example would look like if China built widgets for $0.1 rather than $1, and they generated three times as much emissions per widget of Germany, since this better reflects reality. Would a carbon tax in Germany have a hope of reducing global emissions? No.

Not only does the logic show that carbon taxes in the West will invariably increase global CO2 emissions, but so does the empirical evidence.

To begin with, data from the World Bank reveals that China, and other developing countries, produce far more carbon per dollar of economic output (at purchasing power parity) than do Western nations. For example, China produced 0.6 kilograms of carbon dioxide per dollar of economic output in 2014, whereas America produced 0.3 kg of CO2, and Germany produced just 0.2 kg. On top of this, China shows no signs of decreasing its emissions any time soon: China’s currently building hundreds of new coal-fired power plants, which will ensure its CO2 emissions continue to rise for decades to come.

Taken together, these facts suggest that every factory pushed out of the West due to carbon taxes actually increases global emissions dramatically, and this will continue to be the case for decades to come. A number of other studies came to the same conclusion.

One important paper, published in the Proceedings of the National Academy of Sciences, found that carbon reductions alleged to the Kyoto Protocol were more than offset by increased emissions from imported products. Glen Peters of the Centre for International Climate and Environmental Research writes:

Our study shows for the first time that emissions from increased production of internationally traded products have more than offset the emissions reductions achieved under the Kyoto Protocol … this suggests that the current focus on territorial emissions in a subset of countries may be ineffective at reducing global emissions without some mechanisms to monitor and report emissions from the production of imported goods and services.

Essentially, local carbon taxes are not a useful tool for mitigating a nation’s carbon footprint. If anything they actually raise global emissions. The paper also notes that China accounts for some 75 percent of the developed world’s offshored emissions.

Another study found that all of the trumpeted carbon reductions in places like Germany fall apart under closer scrutiny:

According to standard date, developed countries can claim to have reduced their collective emissions by almost 2% between 1990 and 2008. But once the carbon cost of imports have been added to each country, and exports subtracted – the true change has been an increase of 7%. If Russia and Ukraine – which cut their CO2 emissions rapidly in the 1990s due to economic collapse – are excluded, the rise is 12%.

These studies conclusively show that the offshoring of Western industry to China has actually increased global carbon emissions. It is unreasonable to assume that a carbon tax, which will further increase the incentive for business owners to offshore, will magically reduce global carbon emissions. There is no silver bullet. Carbon taxes are a pipe dream.