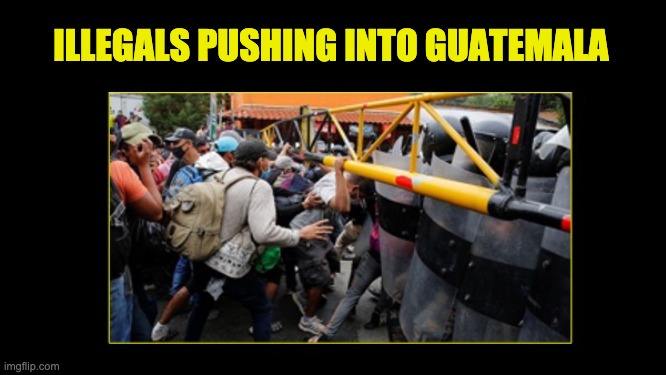 Knowing they have a better chance of getting into the country after Joe Biden is sworn in as POTUS, a U.S.-bound illegal alien caravan left Honduras Friday, reportedly broke through lines of Honduran riot police, and pushed its way into Guatemala by night. On Saturday, the estimated 5,000 to 6,000 migrants were confronting the Guatemalan police forces at various roadblocks. Per Reuters, “between Friday and Saturday, Guatemala had sent back almost 1,000 migrants entering from Honduras, the government said, as the caravan moved towards Mexico.”

Caravan of at least 3,000 Hondurans is marching to the US-Mexico border in time for Biden to take over as president https://t.co/C1d511anPQ

Guatemalan authorities have detained hundreds of Honduran migrants from the caravan including families with young children, though thousands of others were able to breach border security and continue their march northward, Reuters reported.

“We are going to leave the country, to ask for help wherever they receive us,” one migrant told The Associated Press.

Some 6,500 souls are on the move, fleeing poverty and political corruption in the hope of ultimately finding a better life in the United States.

Multiple Central American states and Mexico have been coordinating security protocols to prevent the caravan from continuing on. Many nations have also expressed concerns about how the caravan could become a breeding ground for COVID-19 and who would care for stricken migrants without documentation.

Caravan from Honduras busting through Guatemala Border in route to the USApic.twitter.com/ZSdFqGLzxb

Mexican national guard troops are supposedly waiting at that country’s border with Guatemala to deter the illegal aliens from crossing into the country. Mexico will do its best to block the “migrants” from entering their country based on the agreement they made with President Trump. But the Biden transition team has met with Mexican authorities a few times in recent weeks. Is that a signal of ending the “stay in Mexico” policy that Biden has promised to do? What about the Mexican agreement to block illegals from coming into the U.S.?

“We will be able to take some steps to change policies right away. Others will take time to put in place, and the situation at the border will not transform overnight, due in large part to the damage done over the last four years. But we are committed to addressing it in full,” incoming domestic policy adviser Susan Rice told the Spanish wire service EFE in December.

In a rare moment, Rice did not say that this caravan of illegal aliens was launched by a lousy YouTube video about Muslims.

Notice how the migrant caravans were stopped in recent years? But they know they will have a relatively easy time once Joe Biden is in the Oval Office.

After four years of a President ending the confusion and securing America’s southern border, we will have a president who will open the border and allow illegals into the country. That’s usually a dangerous move—in the time of the COVID pandemic, it’s even more dangerous.

Jessica Vaughan, the Center for Immigration Studies‘  Director of Policy Studies, was on Fox and Friends Sunday morning talking discussing the caravan and Biden’s amnesty proposal. Watch the video below: