If The Capitol Attack Was Preplanned, It Could NOT Have Been Incited By President Trump 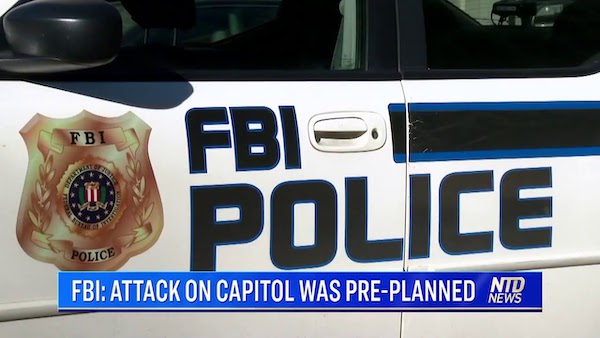 The more we learn about the assault on the U.S. Capitol on Jan. 6 following the Save America Rally that coincided with objections being raised in Congress to the results of the Electoral College and the certification of President-elect Joe Biden, the more it appears to have been a preplanned operation or operations by multiple groups on the right and the left who targeted the rally, the Capitol and even the Republican and Democratic National Committee headquarters.

Specifically, Steven D’Antuono, the head of the FBI field office in Washington, D.C. told reporters on Jan. 12 that “We developed some intelligence that a number of individuals were planning to travel to the D.C. area with intentions to cause violence.”

One such threat made its way into the FBI field office in Norfolk Virginia on Jan. 5, a post on a message board that stated “Be ready to fight. Congress needs to hear glass breaking, doors being kicked in, and blood from their BLM and Pantifa slave soldiers being spilled. Get violent. Stop calling this a march, or rally, or a protest. Go there ready for war. We get our President or we die. NOTHING else will achieve this goal.”

D’Antuono explained the threat could not be linked to a specific person: “that was a thread on a message board that was not attributable… to an individual person. Like I said, in my statement, we deal with specifics and facts. When my office Washington Field Office received that information, we briefed that within 40 minutes to our federal and state law enforcement partners, that we have [in the] JTTF [Joint Terrorism Task Force] system and was again shared with all our law enforcement partners through that process that we have.”

In addition, in Washington, D.C. pipe bombs were planted at both the Republican National Committee (RNC) and the Democratic National Committee (DNC). According to D’Antuono, “those two pipe bombs that were found, were found both outside the RNC and the DNC offices near the Capitol grounds and look to begin, they were real devices. They had explosive igniters. They had timers. We don’t know obviously exactly why they did not go off, that’s being investigated, they were disabled by Capitol police with the assistance of the ATF. And that is obviously being vetted and investigated. What was the purpose of those devices being planted? Was it a diversionary type of tactic used by some of these rioters? Or did it have some other type of nefarious purpose? So that is what the ATF [Alcohol, Tobacco, and Firearms] the FBI, MPD [Metropolitan Police Department] are looking at as we speak right now and looking for those persons that planted those devices.”

So, right off the bat, the FBI did have some intelligence ahead of time that violence was preplanned targeting the rally, including bombs being planted.

Elsewhere, on Jan. 6 the New York Times reported, “Calls for violence against members of Congress and for pro-Trump movements to retake the Capitol building have been circulating online for months,” adding, “On social media sites used by the far-right, such as Gab and Parler, directions on which streets to take to avoid the police and which tools to bring to help pry open doors were exchanged in comments…”

This reporting from the Times in part led to the ouster of Parler from the Apple and Google app stores, as well as being purged from Amazon Web Services hosting platform for the website.

Journalist Glenn Greenwald on Twitter reported that planning was not isolated to a single website, noting in a tweet on Jan. 11, “Do you know how many of the people arrested in connection with the Capitol invasion were active users of Parler? Zero. The planning was largely done on Facebook.”

In his own report on Substack.com, criticizing the de-platforming of Parler by Amazon, Apple, and Google, Greenwald noted, “It is true that one can find postings on Parler that explicitly advocate violence or are otherwise grotesque. But that is even more true of Facebook, Google-owned YouTube, and Twitter. And contrary to what many have been led to believe, Parler’s Terms of Service includes a ban on explicit advocacy of violence, and they employ a team of paid, trained moderators who delete such postings. Those deletions do not happen perfectly or instantaneously — which is why one can find postings that violate those rules — but the same is true of every major Silicon Valley platform. Indeed, a Parler executive told me that of the thirteen people arrested as of Monday for the breach at the Capitol, none appear to be active users of Parler. The Capitol breach was planned far more on Facebook and YouTube.”

Greenwald pointed to Recode.com’s report by Rebecca Heilweil and Shirin Ghaffary, which stated, “Online extremists started planning the chaos of January 6 months ago.” It quoted Avaaz campaign director Fadi Quran, stating, “In D.C., we saw QAnon conspiracists and other militias that would never have grown to this size without being turbo-charged by Facebook and Twitter.”

In addition, one leftist activist who has been arrested and charged for breaching the Capitol, John Sullivan, told the Epoch Times “he knew of plans to storm the Capitol” which he had seen in “undergrounds chats and things like that.”

According to the report, “He posted information about the plans on his social media, but didn’t inform the law enforcement,” telling the Epoch Times, “I’m not a snitch.”

So, planning for the Capitol attack included planting bombs at the RNC and DNC, and allegedly occurred in part, based on all this publicly reported information: in chatrooms, on message boards, on Facebook, YouTube, Parler, Gab, and other social media outlets.

Meaning, no matter what President Trump said at the rally, there would have been violence at the Capitol.

This has more than simply implications for the imminent impeachment trial for outgoing President Trump in the U.S. Senate — which reportedly will not even begin until after Trump’s term of office has already expired on Jan. 20, if it occurs at all.

To be certain, if the riot at the U.S. Capitol was planned weeks ahead of time, then it wasn’t a spontaneous event that occurred as a result of the speech President Trump gave on Jan. 6.

At the speech, President Trump explicitly urged those protesting the certification of the election results by Congress to “peacefully and patriotically make your voices heard.”

Now, it becomes much harder to prove the article of impeachment, incitement of insurrection, where the House alleges the President “willfully made statements that, in context, encouraged — and foreseeably resulted in — lawless action at the Capitol.” In other words, the allegation is that the riot was spontaneous, directly resulting from Trump’s speech.

Now we know that is wrong. The attack was planned well ahead of time. Legitimate questions can be asked about whether there was any coordination between the multiple groups that are being named as having participated in the attack. Law enforcement should pursue every lead, and everyone involved with the riot and engaged in violence including attacking the police should be prosecuted to the fullest extent of the law.

They do not represent President Trump, his movement, or this country.

Ultimately, it was not the speech that caused the violence, it was those who planned the assault in the weeks leading up to it. And by now, it is clear that the attack was preplanned. Meaning, the House and Speaker Nancy Pelosi (D-Calif.) who pushed this snap impeachment rush to judgment — and those in the Senate still pushing for an unconstitutional post-Jan. 20 trial — all owe President Trump and the American people an apology.