Can Biden Be Impeached Based On House Democrat Party Standards? 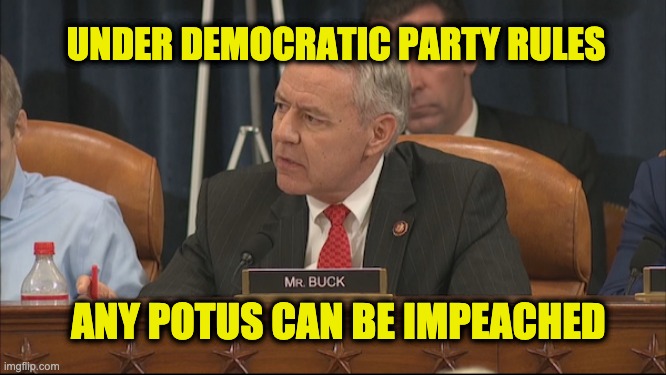 President Biden’s  CDC extended the eviction moratorium despite the fact that the Supreme Court ruled that the executive branch did not have the power to make that decision. In fact, even Biden recognized that his action was probably unconstitutional. can Biden be impeached

The first thing that pops up in my mind when realizing that Biden is disregarding a Supreme Court ruling is impeachment. After all, the court ruled that an eviction moratorium could only be made by Congress.  On the other hand, Biden would never be impeached by his own party, and even if they would do it—America has to be sick and tired of impeachment (I know I am), especially after the two nonsensical impeachments of Donald Trump. The Trump impeachments had nothing to do with “high crimes and misdemeanors,” and everything to do with partisan politics.

There used to be a saying “every little boy can become president.” With the Trump impeachments, the Democrats changed that to “every president can be impeached.” But it wasn’t meant to be that way.

No one knows more about the Trump impeachments than my friend Fred Lucas. His page-turning tome “Abuse of Power: The Three-Year Campaign to Impeach Donald Trump” explains, his quest to impeach Trump began neither with a Capitol Hill riot nor a Ukraine phone call. While pondering the question of Impeachment I asked Fred if he could provide another excerpt from his book that would explain how the Democrats made impeachment almost meaningless. That excerpt follows below:

(Note: the e-book version of “Abuse of Power” is available now for a $2.99 limited time offer)

The House majority, along party lines, finally settled on two articles of impeachment: Abuse of Power and Obstruction of Congress.

The Abuse of Power article was designed to be easy to understand but broad enough to not have to define. The second is because the White House didn’t cooperate with the impeachment investigation. However, the dispute was never litigated.

If a Republican House had been inclined, it could have impeached President Barack Obama for Abuse of Power for taking unilateral executive action on immigration and even boasting about having a “pen and a phone” in lieu of congressional action. The House could have impeached him for Obstruction of Congress for declaring executive privilege to shield records from Congress during the investigation of the Justice Department’s botched Fast and Furious gun-running operation. That’s not what-about-ism. It’s simply stating what the new House standard would mean if retroactively applied.

During the impeachment hearing [the first one impeachment] in the House Judiciary Committee, Rep. Ken Buck, R-Colo., asked if any president short of William Henry Harrison—who died thirty-two days into his term—would escape the broad definition of abuses of power Democrats were trying to apply to Trump.

Buck also addressed the Supreme Court’s 9–0 ruling that Obama bypassed the Senate by recess-appointing members to the National Labor Relations Board when the Senate was still in session. While the NLRB matter seems less than scandalous, it’s a solid parallel to the Trump impeachment article for obstruction of Congress, but only if Congress had decided to impeach before the courts had a chance to rule.

What these weak and vague impeachment articles against Trump say about past presidents is far less important than what it says about future presidents. Despite being disposed of in the Senate, the House set a new broad and vague precedent that will likely turn impeachment into a regular political football game every time the House and the presidency are controlled by different parties.

Or like I said every president can be impeached (but Fred said it better).

Jeff Note: Regular readers know that The Lid has previously featured segments of Fred Lucas’s Books. Fred is a veteran White House correspondent who has reported for The Daily Signal, FoxNews.com, National Review, Newsmax, Townhall, and other outlets. Having read “Abuse of Power: Inside the Three-Year Campaign to Impeach Donald Trump,” I can vouch for the fact that it’s a page-turner.  Sara Carter described it as “A devastating and comprehensive takedown of Trump’s impeachment, and a thoughtful look at the historical context of past impeachments, with strong reporting and research to combat the Left’s inevitable rewrite of history.”   If you haven’t read the book yet, I urge you to take advantage of this special offer. The “Abuse of Power” e-book version is available for just $2.99 limited-time basis.

Get your copy today: