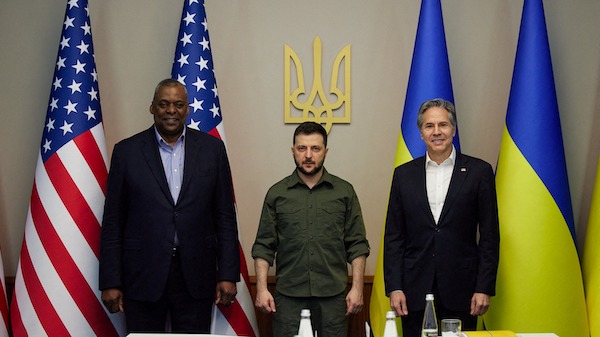 Two months ago, Defense Secretary Lloyd Austin said publicly “that the administration wanted the Ukrainians to win the war against Russia, not just defend themselves, and that the U.S. hoped to weaken Russia to the extent that it could not relaunch another unprovoked invasion.

Thankfully no strategy would include U.S. troops putting boots on the ground to support Ukraine.

One would think that the President would be happy there was no public infighting between these two critical foreign policy advisors on an issue the President seemed to agree with. But not quite.

President Biden was unhappy with the comments. Per  NBC News:

Biden thought the secretaries had gone too far, according to multiple administration officials familiar with the call. On the previously unreported conference call, as Austin flew to Germany and Blinken to Washington, the president expressed concern that the comments could set unrealistic expectations and increase the risk of the U.S. getting into a direct conflict with Russia. He told them to tone it down, said the officials.

The two secretaries believed Biden didn’t understand what they said. To be honest, what did they expect? They used words with more than three letters.Another reason Bided was unhappy was his belief that Ukraine’s early wins wouldn’t last and that eventually, the Russians would win.

This may account for Biden’s lackadaisical approach to sending advanced weapons quickly to Ukraine until the public pushes him to send the weapons—pronto.

The administration’s desire to tone things down does not only apply to the two secretaries.

Some officials want Zelenskyy to “dial it back a little bit,” as one of them put it, when it comes to telegraphing his red lines on ending the war. But the issue is fraught given that Biden is adamant about the U.S. not pressuring the Ukrainians to take steps one way or another. His administration’s position has been that any decision about how and on what terms to end the war is for Ukraine to decide.

Europe is pressing Zelenskyy to negotiate with Putin and trade land for peace. That’s the same unsuccessful strategy they tried to shove down Israel’s throat.

According to John Kirby, the spokesman for the NSC, that isn’t Biden’s position.

However, when one combines Biden’s prediction that  Russia will invade Ukraine with a minor incursion. Or his reluctance to give Ukraine the necessary weapons until facing public and Congressional anger. Biden’s continuing green policies forced Russia’s customers to fund the war by purchasing Russian energy. Biden’s apparent fears of  Putin’s threats don’t help Ukraine and makes America look weak.

Without additional proot, I can’t confirm the rumors that Biden’s position is the same as Europe, only he’s silent. However, the effect of Biden’s policies might drive Ukraine to the same results as Europe suggests.