Californians! You’re Insane! It’s Time To Get What You Deserve 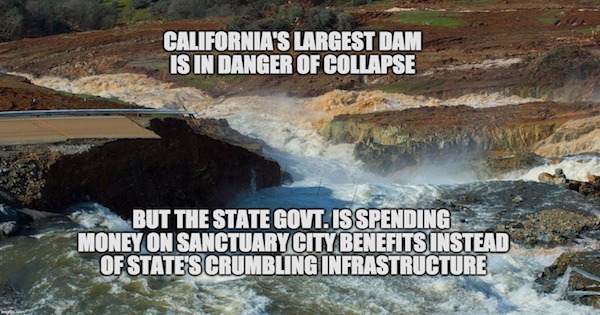 Einstein is credited with saying, “insanity is doing the same thing over and over again and expecting different results.” He must have been thinking about California!

Many Californians are pretty proud of themselves for not following the rest of the country with election results. California stayed solid Democrat, even getting a more solid hold of the California legislature. They now have more than enough votes to override a veto, raise taxes, and just have a field day. Like a group of kids left alone in a candy store and told not to touch anything. Sure that’s going to work! Curiously enough, most local elected officials are Republican but the Dems are working on making that nearly impossible too.

Let’s start with the most recent incident. The rains came. Even though the climate change police and gurus kept saying we were in a drought and that we wouldn’t see that kind of rain maybe ever again. Well guess what? You were wrong! Gov. Brown thought he was sly and smarter than the engineers. After years and years of being told by the Feds and the state engineers that we had dam and water issues, he ignored the needs and the safety of taxpaying Californians and instead made sure that Illegal aliens got to go to our schools, colleges, and take advantages of all kinds of taxpayer-funded programs to the tune of over $25 billion a year!

Governor Brown has made a request for over $100 billion in aid to fix our infrastructure in California. REALLY?! I wouldn’t give him or Californians another nickel until there was a law to ensure that the moneys sent here would be spent for exactly what it was intended. Maybe they need to sign a pledge that if they blow a dime of it on anything else they get immediate 20-year sentences in a North Korean prison.

Better slow down Gov. Moonbeam. That Sanctuary State thing could easily keep you from getting any money. ALL Federal grants require you be in compliance with Federal law and Obama ain’t the sheriff anymore to look the other way.

They are spending so much time fighting Trump on immigration that they have lost sight of reality. They say they don’t need the Feds. So why did they request $100 billion to fix infrastructure when they’ve already collected tax money for it and blown the money?

Maybe we should encourage CalExit. The sooner they break away, the sooner the sane California people will see what damage these legislators are really doing and how much they CAN’T be trusted. And maybe THEN they’ll vote them out and ask the U.S. for forgiveness to be allowed back in the states. And if they don’t come to their senses, let them turn out like Venezuela.

These Loons are so out of touch that they think that they had the right to open an embassy in Moscow. Do they understand it’s against Federal law and they WON’T get the same rights and privileges that a sovereign country would? They don’t care. They think they are above it.

Gov. Brown seems to think that Californians have access to mega bucks they have hidden around the house. He wants to raise gas taxes by 42% (we already have the highest taxes in the country) to help bail out the Cal pension accounts that are grossly underfunded and are killing the state general fund.

Gov. Gray Davis started the “Crap Ball” rolling back in 2000 when he signed a new pension bill giving MANY California employees the ability to retire at 55 and collect more than ½ the highest salary they ever received in a year for the rest of their lives. It was able to be sold to Californians based on a lie. They said that because of the great investments made by the state there would be no new taxes levied on us. 17 years later we sit at $126 billion and climbing fast in pension shortfalls. These guys keep asking us for money and you Loons keep giving it to them AND voting them back in! In the immortal words of Susan Powter… “STOP THE INSANITY!”

Gov. Moonbeam now needs over $100 billion for new highway and roadway projects because of years of deferred maintenance on roads. WHERE is all the tax money we paid? No one will ask or push or hold hearings because they are all Democrats and they are all guilty because the Dems control the state. PERIOD. They wouldn’t even vote to remove a Democrat Senator who was picked up for drug running! Yes, GUN RUNNING… while he was introducing some of the strictest gun laws in the nation! You can’t make this stuff up.

Let’s not forget education. The thing the Dems say they are more for than Repubs. The thing they say they care about the most and are willing to fight for the most, but only when people are watching. Legislators always talk about how great our education system is. “We have some of the best schools in the country and maybe the world in California,” words from a Gov. Moonbeam speech a few years back.

Well, we do have pockets of great school districts in California and great higher education facilities. However, we still rank with a C- (yes, C minus). We are 10th from the bottom according to Education Week magazine, who once again stated that we scored BELOW the national average (and they want more money from taxpayers and want to become their own country?) California earned a 69.9 out of 100. Massachusetts ranked at the top (OMG I can’t believe it) and New Jersey, Vermont, New Hampshire, Connecticut, and Maryland all earned B’s.

California ranked 41st in conditions that help students succeed, 39th in school finance, and 30th in achievement. The report went on to say that California refuses to do anything meaningful to address education issues and continues to allow California’s grade to remain the same year after year.

What the report leaves out is that California keeps throwing more and more taxpayer dollars at it without getting a return. But that’s nothing new for Californians. They are used to being abused and bilked by Legislators.

What I am trying to say here to my fellow Californians is, please stop buying the legislative BS. The Dems have been in control of this state for decades. We keep going deeper and deeper into the financial hole. Our most precious assets, our kids, aren’t getting any better in education than they did 40 years ago and may be getting even worse!

They want more money for the ever-escalating costs of the bullet train to nowhere. They want to raise fees and taxes to cover the over $100 billion they blew over the last 10 years fostering illegal immigration that was supposed to be used for our infrastructure. They want to levy more taxes and fees to offset the pension program that is $120 billion plus in the hole.

Watch these Loons on TV strut their stuff like California was God’s gift to the universe. Maybe it was, but, like Adam and Eve, the Dems have succeeded again, as they have in so many great states and cities, and have blown up paradise!

Stop giving them money until they act like grownups!