California: Taxes, Feces, Poverty, But A Woman In Every Boardroom 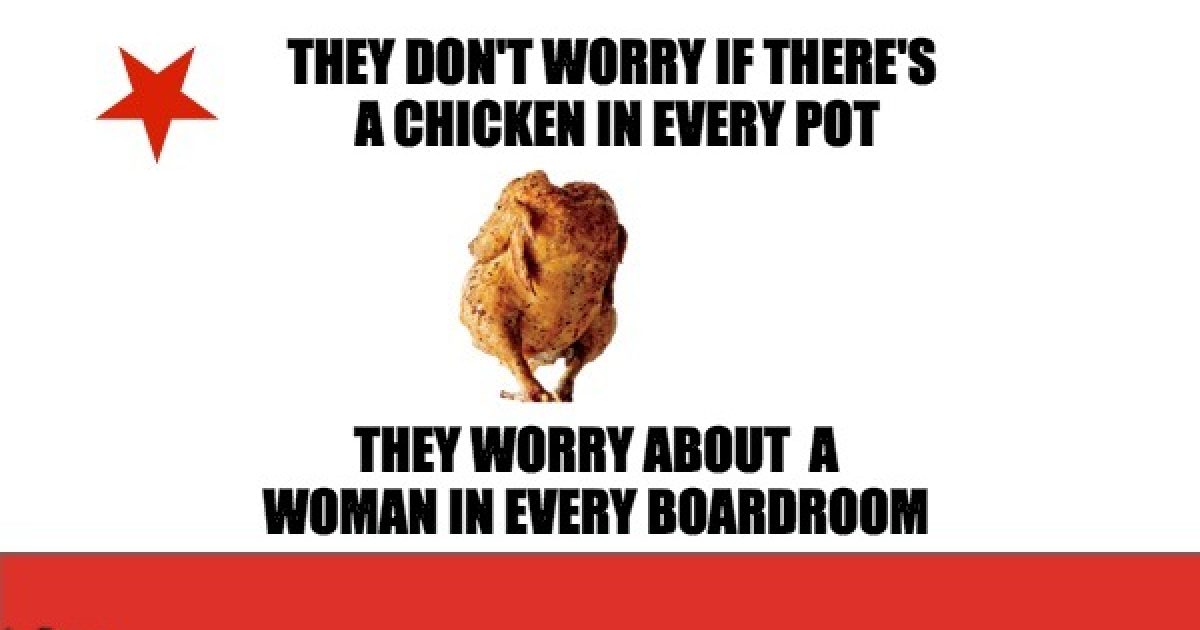 Remember the good old days of politics? You know, when politicians used to promise a chicken in every pot?  In California, which has the nation’s highest poverty when factoring in cost-of-living, human feces lining the streets of its second largest city, the second-highest cost of living and the tenth highest tax burden in the country, they don’t worry about chicken. Their priority is shielding illegal immigrants from law enforcement, free health care for all, and now trying to run corporate America. The state is mandating that there be a woman in every boardroom.

On Wednesday, lawmakers in the Marxist sanctuary state of California passed a measure mandating at least one woman be placed on the board of every publicly-traded company in the state by the end of next year.  Failure to comply with the edict will be punished with a hefty fine — $100,000 for the first offense and $300,000 for subsequent offenses.

The measure, which can be seen here, reads, in part:

(e) (1) The Secretary of State may adopt regulations to implement this section. The Secretary of State may impose fines for violations of this section as follows:
(A) For failure to timely file board member information with the Secretary of State pursuant to a regulation adopted pursuant to this paragraph, the amount of one hundred thousand dollars ($100,000).
(B) For a first violation, the amount of one hundred thousand dollars ($100,000).
(C) For a second or subsequent violation, the amount of three hundred thousand dollars ($300,000).
(2) For the purposes of this subdivision, each director seat required by this section to be held by a female, which is not held by a female during at least a portion of a calendar year, shall count as a violation.
(3) For purposes of this subdivision, a female director having held a seat for at least a portion of the year shall not be a violation.

According to CNN Money:

Research shows that female representation on boards is key for women’s advancement in corporate America. Women on boards are more likely to consider female leaders for the C-suite and choose more diverse candidates for the board itself.

If the bill is signed into law by California governor Jerry Brown, it would be the first state to take such a step. Unlike some European countries, the United States doesn’t mandate female representation on company boards. A majority of companies in the S&P 500 have at least one woman on their boards, but only 25% have more than two, according to a study from PwC.

But setting quotas for representation can be controversial, says Vicki W. Kramer, lead author of the landmark 2006 study, “Critical Mass on Corporate Boards.” Opponents argue that pressure from quotas will lead to unqualified female members and potential discrimination against male candidates.

I am all for diversity. From my days in corporate America, I learned the more diverse my staff, the more diverse were the great ideas I was presented with. But it is not the government’s job to teach that lesson.  In fact, if having women on a corporate board will make a company more successful (and it might), than the marketplace will convince corporations to diversify its board. And where does it stop? Will California soon mandate that there is an overweight bald Jew from New York on every board?

There’s also another very disturbing aspect of this — Will other states now dictate who companies can hire based solely on race or gender? It is certainly something that New York’s tyrant Andrew Cuomo might consider.

Naturally, this didn’t well with many, based on the responses posted by Twitchy:

This can only end well.

So Wrong! Not that women cannot do the job. Government should not be dictating to companies who to run their company.

Yes it is. Young people better wake up. Free is not free in socialism or communism.

Breaking news: CA’s corrupt government wants to control everything anyone says or does, in the name of “equality’.

Congrats, you just made every woman on a company board wonder if they’re just there as a token woman

It gets better. The bill doesn’t designate as female people with X and Y chromosomes.  It’s anyone who self-identifies as a woman (like Corporal Klinger from MASH?).

How much farther will this go?  Who knows…

But we can’t help but wonder:  What’s wrong with letting the marketplace decide, that’s what this country was built on.