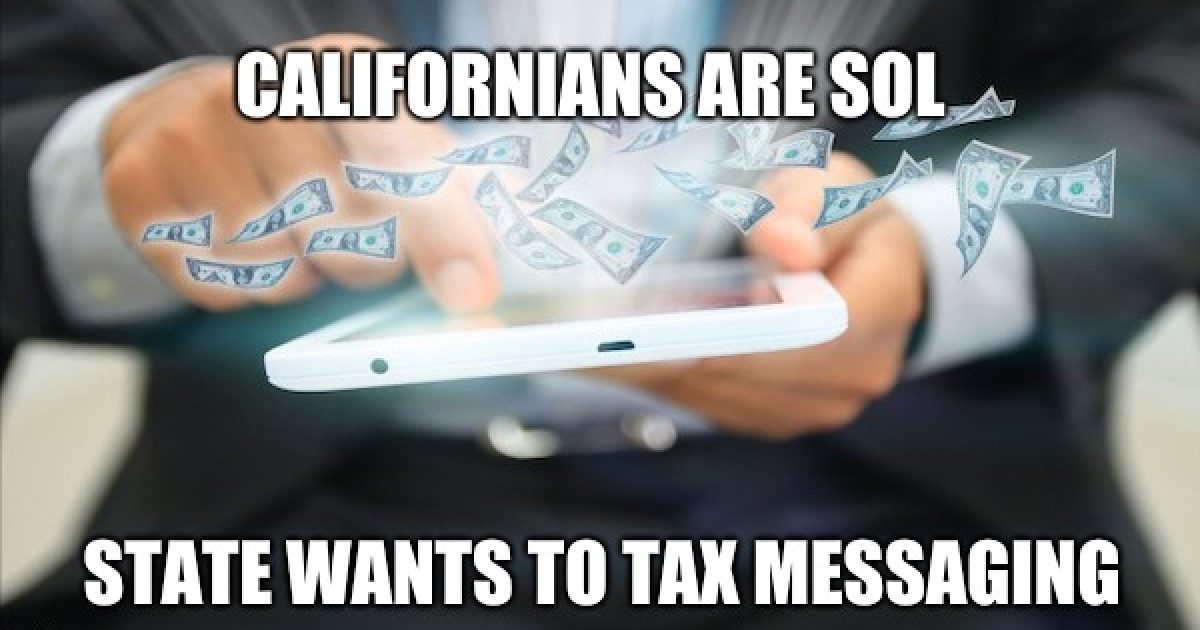 I know what you are thinking, AYKMWTS? But no this is true. California will tax anything, and to prove it they are looking at taxing text messages to help pay for cell phone service for poor folks. The California Public Utilities Commission (CPUC) is looking to vote on the proposal as early as late December,  but until then the wireless industry is working hard to defeat the proposed tax (a copy of the tax proposal document is embedded below).

“It’s a dumb idea,” said Jim Wunderman, president of the Bay Area Council business-sponsored advocacy group. “This is how conversations take place in this day and age, and it’s almost like saying there should be a tax on the conversations we have.”

It’s unclear how many individual consumers would be asked to pay their wireless carrier for texting services under the proposal. But it likely would be billed as a flat surcharge per customer — one of those irksome fees at the bottom of your wireless bill — not a fee per text.

Business groups, including the Bay Area Council, California Chamber of Commerce and Silicon Valley Leadership Group and others opposing the idea, calculated the new charges for wireless consumers could total about $44.5 million a year.

But they add that under the regulators’ proposal the charge could be applied retroactively for five years — which they call “an alarming precedent” — and could amount to a bill of more than $220 million for California consumers.

This proposal puts cell phone companies at a competitive disadvantage as other texting platforms such as Facebook and/or Messenger, twitter, and others, remain free.

The Federal Communications Commission is expected to affirm that Wednesday at a meeting, the CTIA said, which would confirm that the state utilities commission “has no authority to impose surcharges on text messaging.”

Beyond that, the wireless industry argues a surcharge on texting would put carriers at a disadvantage with competing messaging services that wouldn’t be hit with the new fees, such as Facebook’s Messenger and WhatsApp, Apple’s iMessage and Microsoft’s Skype. Those kinds of services account for “almost triple the volume” of wireless carriers’ share of the more than 3 trillion text messages sent in 2018 alone, according to the CTIA.

“Subjecting wireless carriers’ text messaging traffic to surcharges that cannot be applied to the lion’s share of messaging traffic and messaging providers is illogical, anticompetitive, and harmful to consumers,” the CTIA said in its filings.

In a letter to commissioners urging them to drop the plan, business groups and other critics added that wireless customers already pay a surcharge for the Public Purpose Programs (PPP), which they said “are healthy and well-funded, with nearly $1 billion in the budget.”

The CPUC is already taxing the phone call part of cell phone service. Fortune Magazine explains the reason the CPUC is looking at squeezing revenue out of text messaging that PPP revenue is down because people have changed their manner of communication from voice calls to texting.

As mobile phone users have shifted their usage patterns away from voice calls, voice call revenues for PPP have dropped by about a third, while the budget for subsidizing poorer users has risen by almost half. So California’s PUC is exploring its options and, as texts share infrastructure with voice calls — even if the medium is different — it estimates it could raise $44.5 million a year with the change. Applied retroactively it could amount to a bill of more than $220 million for California consumers.

IMHO this proposal is nuts, but TBH this is California where crazy rules the day.  If they tax texting what’s next? A tax on flushing toilets?  FFS! And these California voters keep electing these idiots who keep taking their money–why?

Below is the proposed new tax.

UPDATE: My Friend Ed Morrissey explains at HotAir whether or not the proposed tax is legal, as usual with Ed’s writing this post will KYSO, so go read it RT.  Before you go FUTAB get over to Hot Air and read, YGBKM: TIL California Wants To Tax … Text Messages and remember MTFBY.