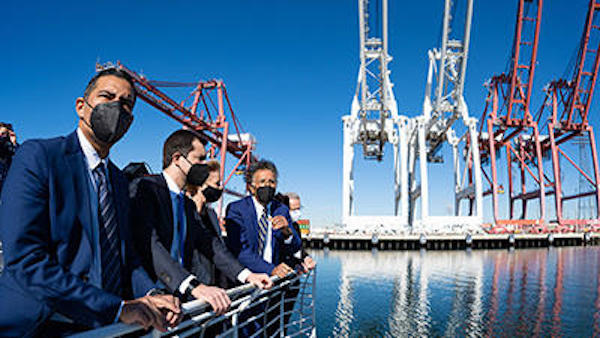 Transportation Secretary Pete Buttigieg finally visited the Ports of Los Angeles and Long Beach, California. His purpose appears to have been putting on a PR Stunt to tell everyone how wonderfully the Biden administration is fixing the supply chain backup. Except that it backfired. (Western Journal)

Pete’s PR Stunt
Mayor Garcetti introduced Buttigieg as “the man who saved Christmas.” In fact, instead of creating the conditions for ships to unload their products, the ports simply moved the ships away from the docks to somewhere else in the world. The new “que” system allows only a certain number of ships to unload at a time, the rest are somewhere out in the ocean or docked in another country. They don’t lose their place in line under the new system wherever they end up. No joke. Instead of helping the supply chain, they’ve just changed it to be out of sight, out of mind.

It's been a sunny and productive day here in LA, meeting with elected officials, port leaders, labor, and others invested in improving our supply chain. pic.twitter.com/9XMgtr3fXL

Back in November, the port authorities in southern California adopted a new queuing system for ships that allows them to wait anywhere in the world without losing their spots in line. They did this because the exhaust from all the ships idling near the ports was harming the air quality. For a few weeks, this change made it appear as though the number of ships waiting had declined because they were no longer clogging up the harbor. But the Marine Exchange of Southern California adjusted its counting method soon after.

Only 16 of the 105 ships waiting are within 40 miles of the ports, FreightWaves says. The other 89 are scattered all over the world, with many congregating off the Baja peninsula….

Biden claimed victory over the supply chain crisis on December 22. But as usual, he was delusional. Anyone with half a brain looking at the empty store shelves knows that something is still amiss.

The shelves are still bare in various places in the store weeks after the above photo was taken, although some items like lettuce have been added back to the produce section. For about a week, you couldn’t find salad fixin’s in the store at all. And this store is in better shape than many in other parts of the nation. Thanks, Pete, your PR stunt for fixing the supply chain problem is a lie.