Owens Calls It Affirmative Action For a Marxist 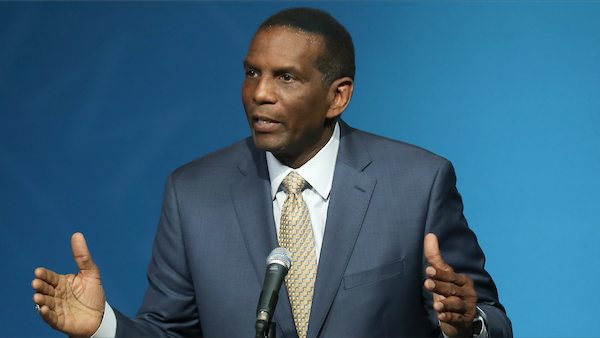 Super Bowl champion Burgess Owens slammed the NFL for courting radical anti-police activist Colin Kaepernick as the organization slowly transforms themselves from an athletic league to a social justice network.

Owens, who is running for Congress in Utah, has aligned himself with President Trump on the matter, stating he will abandon the game should the NFL kneel before Kaepernick.

“If [NFL Commissioner Roger] Goodell allows Kaepernick to come back, if they allow players to kneel during the national anthem, I’m willing to not watch the game,” he told Sports Illustrated.

Owens blasted Goodell for not getting a handle on the matter when it first reared its ugly anti-American head.

“The only thing that can change the league is to change commissioners,”  he added., “This has been going on way too long, it is four years of this mess.”

Former NFLer @BurgessOwens on Colin Kaepernick – saying stuff no one has the balls to say.

Owens, who is Republican, African-American, and a man who played for the NY Jets for a decade,  continued by absolutely eviscerating Kaepernick should he be brought back into the NFL fold by any team willing to take a chance on him.

“If it was a meritocracy he would be out there anyway, he would work hard, he would prove himself. He wouldn’t be taking someone else’s position,” he explained. “We’re looking at Affirmative Action for a Marxist.”

He continued by accusing the league of disliking what Tebow stood for because “they thought he was too distracting.”

I have to disagree with Burgess Owens on that one.  Tebow isn’t in the league because as a quarterback he couldn’t move his team down the field (at least when he was with the Jets)

“Meanwhile we’re willing to have the distraction of a Marxist – a Castro brother-loving Marxist – to come back and play that many Americans don’t want to see him play,” Owens fumed.

He said the NFL lost quite a bit of their audience when they allowed kneeling in previous seasons and suggested: “They don’t care enough about their fans who love this country.”

"These guys are making $50 million a year and they can't stand and tell young people this is how I did it… These are marxists. They are enemies to our nation…" pic.twitter.com/FeXO1lfAPh

Owens Is Right About Colin Kaepernick (Not Tebow)

Owens is correct in that any NFL team hiring Kaepernick at this point would be wasting a roster spot on a symbolic hire.

His last season in the league, Kaepernick led his team to an atrocious 2-14 record (1-10 in games he started).

Colin Kaepernick wasn’t fired from the 49ers, he opted out of his San Fransico 49ers contract because he didn’t want to be a back-up quarterback and get a back-up’s salary. Therefore he chose to become a free agent.  No one wanted to sign the QB because Kaepernick priced himself out of the market. He thought he was better and worth more than his mediocracy deserved. If he had the talent that his ego thought he had, someone would have paid him the big bucks to play–but that wasn’t the case.

At the last minute, Kapernick and his camp decided to change the Atlanta location because, among other reasons, he wanted media there. Because of that last-minute change, only 8 teams showed up.

There’s the old saying, “don’t look a gift horse in the mouth.” Kaepernick didn’t look it in the mouth, he punched it in the face. Not one of the clubs who showed up signed him. But the receiver Kaepernick picked to catch his passes in the workout was signed.

Speaking to reporters at the NFL winter meetings in Irving, Texas, Goodell was asked about the November 2019 Kaepernick workout for NFL teams. Goodell answered that Kaepernick blew his chance.

Kaepernick wasn’t in the NFL because of his mediocre talent and an ego more massive than a major city.  Goodell knew this last November, but for some reason, he believes putting on the field will sate the African-American community for any charges of racism. Now he’s going to walk onto the field for a team only because it will make the NFL look good? Puleese!

And what’s going to happen if he is signed and a camera pans the sideline and shows Kaepernick sporting his ‘cops are pigs’ socks or Castro t-shirt?

What will happen is the same thing that happened before, patriotic Americans will walk away from the NFL—ratings will tank, TV and sponsorship revenue will crash.