Despite Raising Taxes, Build Back Better Act Will Blow $800 Billion Hole In Deficit Through 2026

Any inflation created by the legislation will happen now, which will be paid for by U.S. households as a hidden tax — and Washington, D.C. will worry about it later by raising your taxes. 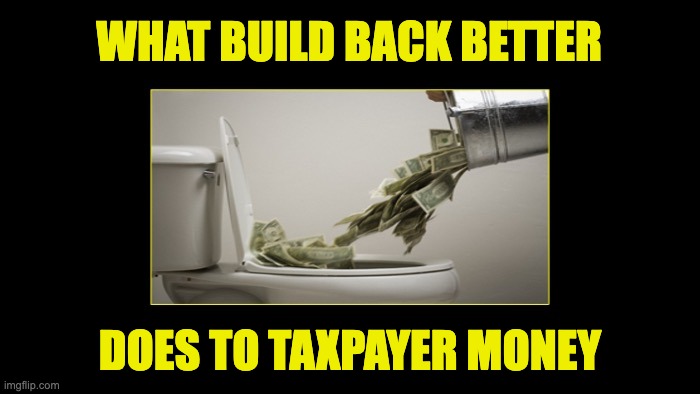 President Joe Biden’s $1.75 trillion spending bill has passed the House, and now all eyes are on the Senate. Particularly U.S. Senator Joe Manchin (D-W.Va.), who will make or break the deal with the Senate divided 50-50 between Democrats and Republicans. This decision could become even more difficult after the Congressional Budget Office (CBO) released a score showing $800 billion of deficit-spending through 2026.

The legislation over ten years would only add $367 billion to the debt, though, as tax increases in the bill take effect in the latter five years, a budgeting gimmick that could lock in those tax hikes in later Congresses. Still, more will have to be done to modify the current legislation as budget reconciliation rules require legislation to be deficit-neutral.

In other words, it spends all the new monies upfront and then depends on massive tax hikes in the out years to “pay” for it. Meaning, any inflation created by the legislation will happen now, which will be paid for by U.S. households as a hidden tax — and Washington, D.C. will worry about it later by raising your taxes.

After the latest Consumer Price Index numbers came out at an accelerated 6.2 percent annualized in October, Manchin on Twitter warned his colleagues on Nov. 10: “By all accounts, the threat posed by record inflation to the American people is not ‘transitory’ and is instead getting worse. From the grocery store to the gas pump, Americans know the inflation tax is real, and DC can no longer ignore the economic pain Americans feel every day.”

This is the highest inflation since Oct. 1990, when it rose to 6.4 percent. It had been registering 5.2 percent the past three months as the price hikes have become a standard feature of the Biden economy.

A Politico-Morning Consult poll found 43 percent of Americans said the $1.75 trillion spending bill would make inflation worse, and only 26 percent said it would make it better.

Manchin has been tying the inflation problem to Congress’ own spending habits, and it’s little wonder.

Since Jan. 2020, the national debt has increased $5.7 trillion— $3.2 trillion of which was monetized by the Fed with quantitative easing — to $29 trillion as Congress responded to the Covid pandemic, state-led lockdowns, and the ensuing recession it caused.

That included the $2.2 trillion CARES Act and the $900 billion phase four legislation under former President Donald Trump, and then the $1.9 trillion stimulus and $1.2 trillion infrastructure bills under President Joe Biden.

That’s $5.5 trillion of new spending in the past two years. That combined with the Fed’s $4.4 trillion of quantitative easing, including $3.2 trillion of treasuries purchases, and $1.2 trillion of mortgage-backed securities purchases, plus hundreds of billions more in emergency lending, and as a result, the M2 monetary base has increased more than 37 percent, or $5.6 trillion to $20.9 trillion while the dollar was weakening.

The dollar has actually started strengthening once again, which might help to bring down prices and get inflation under control. That is if only Congress would do nothing.

It is into this environment that Congress now wants to dump another massive $1.75 trillion spending bill, which in the immediate future will help blow up the deficit again, flooding the treasuries market and potentially weakening the dollar again.

And this time, if Manchin votes for it, it will be vulnerable Democrats who will pay the price in the 2022 midterms. Even if Manchin votes no, they might lose anyway. In midterm elections dating back to 1906 through 2018, the party that occupies the White House usually loses seats in the House 90 percent of the time, on average 31 seats, and loses seats in the Senate 71 percent of the time, on average about three seats.

Which will likely be Senate Majority Leader Chuck Schumer’s (D-N.Y.) message to Manchin: Vote for it now because Biden’s legislative agenda will be dead after Nov. 2022. Democrats could be damned if they do and damned if they don’t.