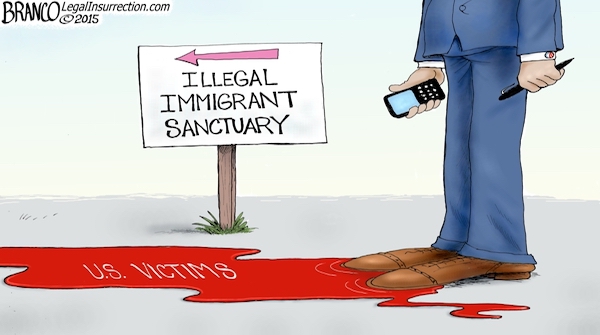 During his first week in office the President Issued an executive order that punished sanctuary cities by “Refusing federal funds to those jurisdictions that do not comply with Federal [immigration] law, except as mandated by law”

The order defined sanctuary jurisdictions “as jurisdictions that “willfully refuse to comply with 8 U.S.C. 1373,” which prohibits Federal, State, and local officials from refusing to provide information on citizenship or immigration status requested by immigration authorities.”

The order was met by protests from sanctuary those law breaking State, and local officials, as well as liberal media who claimed the order was unconstitutional.  But the President is not backing down and his new budget includes provisions designed to enforce is executive order.

As the President’s order explains:

Many aliens who illegally enter the United States and those who overstay or otherwise violate the terms of their visas present a significant threat to national security and public safety.  This is particularly so for aliens who engage in criminal conduct in the United States.

There is a very real, very serious threat facing our country in the form of illegal immigration.  Not only do illegal immigrants place unnecessary burden on our economy due to their less than stringent adherence to the United States’ tax code, but they also create a legal logistical nightmare for the nation as a whole.  Cities across the country are certainly not united and homogenous in their treatment of illegal aliens, with so-called “sanctuary cities” openly defying the President and the laws of our nation.

Now, Trump is taking aim directly at those outliers in his new budget proposal.

“Buried in President Trump‘s budget proposal released Thursday was an opening salvo against so-called sanctuary cities, local jurisdictions he promised to punish for refusing to cooperate with deportation officers.

“Trump wants to slash $210 million in federal reimbursements to state and local jails that hold immigrants convicted of crimes while in the country illegally. The Trump administration called the program ‘poorly targeted,’ adding that two-thirds of the money goes to only a handful of states, including California and Illinois, ‘for the cost of incarcerating certain illegal criminal aliens.’

“The money, awarded by the Department of Justice, can make up a sizable portion of budgets for state and local police and sheriff’s departments.”

On the other hand the money is granted to those state and local sheriffs offices as part of the State Criminal Alien Assistance Program (SCAA) . SCAA is a Justice Department grant to local governments meant to compensate for the cost of jailing illegal aliens. Logic would dictate that sanctuary cities don’t deserve that money because they aren’t jailing the illegals.
According to the Department of Justice SCAA had a $210 Million budget in 2016 and they do not want the program funded in fiscal 2017.