When Bubba & Hillary Clinton RIPPED OFF Earthquake Victims In Haiti 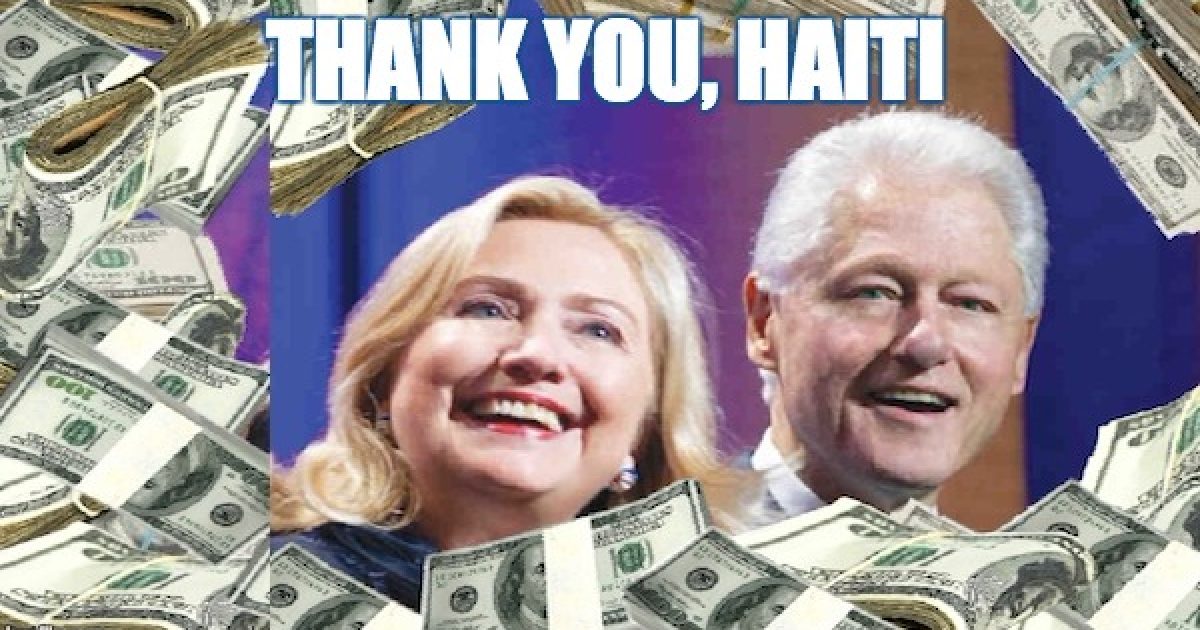 After the sh-t hole comment that President Trump may or may not have said last Thursday, the media has been all over what he supposedly said about Haiti. But even if President Trump made the vulgar (but not racist) comment, there are far worse things government officials have done to that tiny country. Like the time when Haiti needed help the most, former president Bubba and his Secretary of State wife used a Haitian tragedy to enrich themselves, their friends, and their family.

After that horrible 7.0 magnitude earthquake in January 2010, Secretary of State Hillary Clinton and her husband, Clinton Foundation Chief/ former POTUS Bubba visited Haiti just a few days after the devastation occurred. Both promised to help Haiti rebuild. In fact, Bill was named the UN special envoy to Haiti and in conjunction with his Secretary of State wife controlled billions of dollars of contracts awarded by the State Department to rebuild Haiti. “Coincidentally” many of those companies who got one of those lucrative State Dept. contracts to help rebuild Haiti,  also “just happened to” give large donations to the Clinton Foundation.

The Govt. of Haiti set up the Interim Haiti Recovery Commission (IHRC) and installed the Haitian Prime Minister and Bill Clinton as co-chairs of the commission’s executive committee. But soon a number of members of that commission wrote a letter expressing concerns they were not involved in the process and all of the decisions were being made by Clinton and the Prime Minister and they claimed and argued the national priority of the Haitians were being disregarded by the decisions being made. They were correct.

For example, there was the Haitian Mobile Money Initiative a system developed to allow Haitians to transfer money via cell phones. That contract was awarded to a company called Digicel who earned more than $50 million in Haiti. The company is run by Irish billionaire who set-up high-paying speeches for Bill Clinton and donated millions of his own money to the Clinton Foundation.

Another program to enable Haiti to raise needed capital by exploiting the country’s mineral resources. One of the companies which got a mining permit was VCS Mining. The company had little experience in mining, but right after they got the contract “just happened” to put Hillary Clinton’s brother Tony, on its Board of Directors.

Then there was the Caracol Industrial Park, announced in Haiti with great fanfare at a ceremony which included many American Celebrities. The Anchor store is a Korean manufacturer who “just happened” to be Clinton supporters.

Judicial Watch reported a GOA audit revealed roughly half of the $1.14 billion that the U.S. government allocated to help Haiti recover from the 2010 earthquake went to wasteful projects with the single largest chunk—$170.3 million—going to a failed port and power plant adventure heavily promoted by Bill Clinton and the State Department under the leadership if his beloved wife.

Another Judicial Watch investigation revealed that while Hillary Clinton was secretary of state she. pulled strings so that Miami businessman/Clinton Foundation Donor Claudio Osorio could get a $10 million loan from the federal government which he never intended to repay.  Mr. Osorio is now serving a 12-year prison sentence for scamming the federal government and others out of millions.

Osorio got the money from the Overseas Private Investment Corporation (OPIC), a federal agency that operates under the guidance of the State Department, to build houses in Haiti after the 2010 earthquake. The OPIC supposedly promotes U.S. government investments abroad to foster the development and growth of free markets. Osorio’s “Haiti project” was supposed to build 500 homes for displaced families in the aftermath of the earthquake. The project never broke ground and Osorio used the money to finance his lavish lifestyle and fund his illicit business ventures.

During the presidential campaign, the former president of the Haitian Senate, Bernard Sansaricq, told Donald Trump that he had the documentation to prove that the Clintons tried to bribe him in an effort to get his support for the Clinton foundation’s work to defraud the people of Haiti. That’s above and beyond Sansaricq’s claim that the Clintons pocketed donations for themselves.

A second possible bribery was exposed this past September.  Apparently, on Jan. 27, 2011, Clinton Foundation Chief Operating Officer Laura Graham sent an email to then-Secretary of State Hillary Clinton’s chief of staff Cheryl Mills, voicing concern about a rumor. Ms. Graham had heard that Foggy Bottom was thinking about revoking the U.S. visa of Haitian Prime Minister Jean Max Bellerive. “WJC will be v unhappy if that’s the case,” Ms. Graham warned Ms. Mills, using the initials of the former president.

Ms. Graham, who was also chief of staff to Mr. Clinton at the foundation, had other reasons to worry: “I’m also staying at [Mr. Bellerive’s] house FYI so exposure in general and this weekend in particular for WJC on this.”

So Clinton Foundation staff was hobnobbing with a powerful Haitian politician and using connections at the State Department to try to influence U.S. policy decisions involving that same politician. That’s unethical and it is also contrary to what Mrs. Clinton promised when she went before the Senate Foreign Relations Committee in January 2009 as President-elect Barack Obama’s secretary of state nominee. But most of those promises were ignored.

I probably don’t have to tell you that Prime Minister Bellerive got to keep his visa and Ms. Graham didn’t get kicked out of his house that weekend. The Wall Street Journal went on to explain that Mr. Bellerive and the Clintons made a lot of money by working together to milk Haiti for all they could.

If Trump did call Haiti a sh-t hole we need to put it into perspective.  We must remember bribes and ripoffs may hurt Haiti’s people during earthquake rebuilding, but words will never harm them.