The REAL Story Of The Ides of March: Brutus Got Screwed 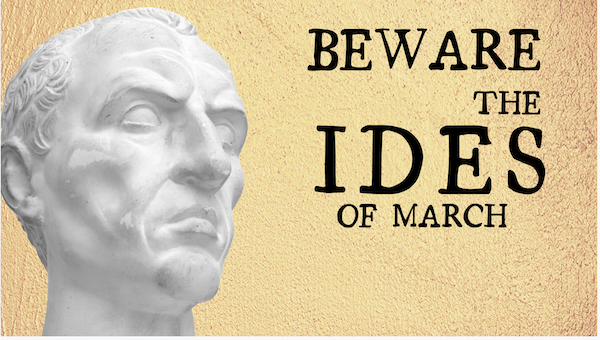 Yes, today is March 15, the Ides of March/  On March 15 in the year 44 B.C.E. Julius Caesar lost the Roman Primary partly because his close friend Marcus Brutus stabbed him in the back. By the way, Caesar never said, “et tu brute.?” He said, “You smell nice. Are you using ‘Brut?”

And just before Brutus was about to take over, goodie-two-sandals, Marc Antony, a great communicator, made a passive-aggressive speech that turned things around. But remember, Antony was secretly good friends with Willie Shakespeare, who was known in Brooklyn as the Boid of Avon.

It was Joseph of  Scarborough who wrote the speech for Marc. It was penance for dumping his wife and political party simultaneously,   And by the way, Caesar’s first name wasn’t really Julius. Shakespeare changed that also. His real first name was Groucho, and he had two brothers, Chicus and Harpus. Willie didn’t mention them because Harpus was mute, and Chicus had a solid Roman accent.

Personally, I don’t believe it was Marc Antony’s passive-aggressive speech alone that sealed Brutus’ fate, The fact that Antony was a dead ringer for Marlon Brando had to help. And as you can see in this picture, Antony didn’t really believe what he said during the speech. See the smirk on his face? It was all an act. 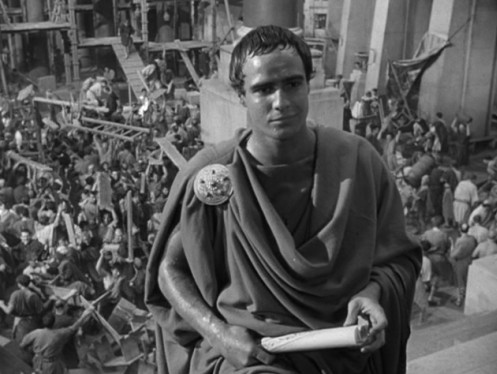 You see, Antony not only wanted Caesar’s job, but he had the hots for Caesar’s girlfriend, Cleopatra.

Marc Antony was faking it with all those “Brutus is an honorable man’, B.S., after finishing his speech, there was nothing but praise, “Antony this, Antony that:” all of Rome adored that loser. Kind of;like America adored Barack Obama,

Who cares! It was that same fake charm that helped him seduce Cleopatra, the woman who gave birth to Caesar’s son. Yeah, I know Shakespeare said she seduced him– but come on, do you believe everything you read in the liberal media?

Marcus Brutus. He was a man of great honor and a conservative. He killed Caesar because big Julie was about to take over the democratic process, rule as a despot, and destroy people’s freedoms–the same way the Democrats are doing it today. They used knives to kill Caesar because there was no Second Amendment in Rome ( or guns). But nothing angered Marcus more than when politicians are on the take, like Hunter Biden’s dad, “the big guy.”

Brutus’ had two big political problems. He expected everyone in the senate to be as honorable as he was. Instead, They were as honorable as Chuck Schumer, the ‘senator from the state of Novum Eboracum. Brutus was a big believer in Reagan’s eleventh commandment. He would never verbally attack another candidate for emperor (kind of like Romney). His other problem was that he wasn’t as good-looking as his competition. Antony was a dead-ringer for Marlon Brando. We see Marcus with his taller friend Caius Cassius in the video below. He’s not bad-looking, just not as good-looking as Antony. And because he was so honorable, he didn’t go to Marc Antony before Caesar’s funeral to cut a deal, you know, make him an offer he couldn’t refuse. Brutus wanted to serve, but it was all about power for Antony. For Marc Antony, ruling Rome was like a chariot on a street named desire.

Marcus Brutus was a man of real honor and a great leader, but Shakespeare felt he could only have one hero, so Marcus was the odd man out. Hence, Brooklyn’s boid of Avon took a tale that should have been a story of a  Roman star being born. But it turned out for Brutus to be a deadly affair.

Even though he wasn’t given all the credit he deserved by the Boid, Willie Shakespeare at least gave him one scene where it displayed his great sense of honor. The scene where Brutus and fellow conspirator Caius Cassius  (who during the assassination hid behind the grassy base of a statue) had a fight because Cassius had an issue with “sticky fingers.” Kind of like a NYC buildings’ inspector. Below is a video of Brutus’ rebuke of Cassius. I still remember the lines as I played the role of Brutus in a college production. And every year, on March 15, I find a way to torture my family by orating some of Brutus’ words from the scene below.

And Remember, Beware Of The Ides Of March.