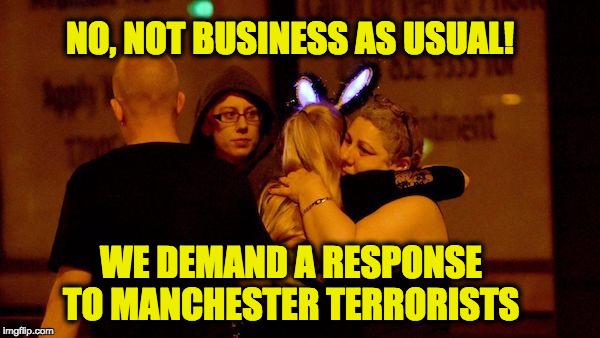 Andy Burnham, the mayor of Manchester stated that the attack on Monday was “business as usual” in the city. That comment from the mayor set off a British reporter, Katie Hopkins, and she delivered a message in the Daily Mail that echoed the feelings of many in Britain and here in the United States. Enough with the stiff upper lip…enough with the carry on like nothing happened…we want to hear that our government is going to make those losers…those radical islamists hurt –and hurt real bad. And then toss anyone who agrees with them out of the country.

I want to scream at him. Business as usual? BUSINESS AS USUAL?

Tell that to the mother of 16-year-old Georgina Callander. Someone slaughtered her most special thing, the tiny baby she carried, birthed, equipped with all the things she could protect her from the world with, smiling at her loveliness as she became a young woman.

And you say it is business as usual? The dead never get to carry on as normal.

This is not usual, Andy. This is not ‘part and parcel’ of city life, Sadiq.

This country is not usual. It is absurd. Disgusting. Forlorn. Broken.

And we will have a full day of this, this standard response to terror. A narrative so drilled into the minds of the terrified that they cling on to it for fear of drowning in the horror

We stand united. We are not broken. We are strong.’

‘We stand united. We are not broken. We are strong.’

The new Lord’s Prayer of a terrorized generation.

Saying it over and over, faster and faster as the sharks circle and it becomes clear that hope is fading fast. That this could be the end. If not this time, then the next one. Or the one after that.

‘I wanted to vomit. Crouching at the end of my bed, I wanted to be physically sick, knowing what this would mean for today’

Next time could be my daughter, my child.

After the Westminster terror attack on March 26 I said we were cowed. That we were like ants, carrying on as normal, waiting for the next footstep to fall.

And today I see this to be true. Ants, squashed by a car, hewn in half by a truck, bounced off the bonnet of a 4×4, punctured by ball bearings and shrapnel from a hardware store.

And the only thing we ants can do is act busy. Whip ourselves up into a frenzy of activity. Move this way and that. Scurry about carrying things. Film ourselves walking to work. Make posters about ‘having a cup of tea’, get cross about what is said on twitter….

Hopkins appeared on Fox and Friends on Wednesday adding:

(…) And, I think, we’re saying, ‘No, we want to hear the truth. This is Islamic terrorism, and we need to start fighting back,'” she added.

Hopkins said many voices like hers have been silenced by the U.K.’s politically correct atmosphere, which protects the “human rights” of jihadis.

“We’re tired of buying into the narrative that we’re strong and the jihadis are weak. No, we’ve been knocked down, we’ve been trampled on,” Hopkins said. “We have our priorities all wrong. And what I’m saying is, to Great Britain, we have to stand united against terror. We will stand united in calling for action, demanding a response. We want jihadists out of this countries or locked up. They cannot have rights over our sons and daughters.”

Yep a response…not niceties not political correctness, the people want action.  We want to hear how government will do its #1 job protect the people. Whether that means limiting who comes into the country based on whether or not they originate from or even just visited failed stated and/or it means sending the terrorists and their leaders to mean their leaders.

Bush #41 said it perfectly on his first visit to ground zero after 9/11:

President Bush: Thank you all. I want you all to know — it [bullhorn] can’t go any louder —  I want you all to know that American today, American today is on bended knee, in prayer for the people whose lives were lost here, for the workers who work here, for the families who mourn. The nation stands with the good people of New York City and New Jersey and Connecticut as we mourn the loss of thousands of our citizens

Rescue Worker: I can’t hear you!

Katie Hopkins is right –that’s what the British want to hear. That’s one of the reasons why Donald Trump won –No more leading from behind, no more Mr. Nice Country…It’s time to kick butt and take no prisoners.