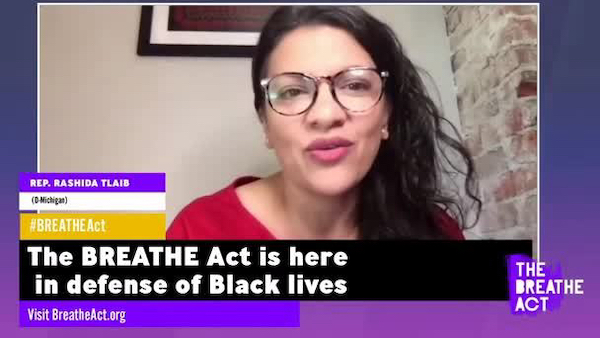 Representatives Rashida Tlaib (D-MI) and Ayanna Pressley (D-MA) two members of the Democrat ‘Squad,’ are set to introduce legislation brought forth by a group seeking to “abandon” police, prisons, and any form of punishment for lawbreakers. breathe act.

The bill has been developed by the Electoral Justice Project for the Movement for Black Lives (M4BL).

The Philadelphia Inquirer reports that the legislation not only seeks to defund the police but also divest resources from incarceration and “reduce the Department of Defense budget.”

Today, we unveil the BREATHE Act, a visionary Civil Rights legislation. Join us live at 11AM ET with @RepPressley and @RepRashida and a special performance by @JohnLegendhttps://t.co/OQ8aQxVdAB #BREATHEAct pic.twitter.com/K9G0iZzTFB

Colorlines reports that Pressley (D-MA) and Tlaib will introduce the M4BL bill “to the congressional floor,” though the Associated Press indicates lawmaker has committed to that as of yet.

Tlaib joined the group for a video conference and said she and Pressley are “committed to fully engaging with this legislation seriously and with a sense of urgency in this historic moment. We must listen to and trust the leadership of black activists around the country,” she added.

Those activists from the group she is trusting are calling for police and prisons to be abandoned.

“We are rising up against all the ways that the criminal-legal system has harmed and failed to protect Black communities,” the M4BL site reads. “The current moment requires a solution that fundamentally shifts how we envision community-care and invest in our society. They add, “History is clear that we cannot achieve genuine safety and liberation until we abandon police, prisons, and all punishment paradigms.”

Taking a closer look at the bill summary shows just how extreme this legislation is. It not only seeks to defund the police but calls for open borders as well, a concept that would disproportionately harm the black community.

Some of the text calls for:

The bill even includes climate change provisions, a socialist dream come true, yes, but what it has to do with racial justice, we’re not quite sure.

The legislation calls for the passing of House Resolution 40, a bill resubmitted last year by Rep. Sheila Jackson Lee (D-TX), which would create a ‘reparations commission.’

Tlaib has previously voiced consideration for the “direct payment” of reparations …

Revolt TV reports that “the proposed bill would also abolish the Drug Enforcement Administration and Immigration and Customs Enforcement (ICE).”

Essentially, any agency enforcing laws would be defunded, abandoned, or eliminated.

“If we listen to our community members and leaders in the streets, we can start to envision through this bill a new vision for Public Safety,” she gushed, “one that protects and affirms black lives.”

Republicans should call their bluff as they did with the Green New Deal, and get every Democrat to vote for the complete abandonment of police officers on the record.