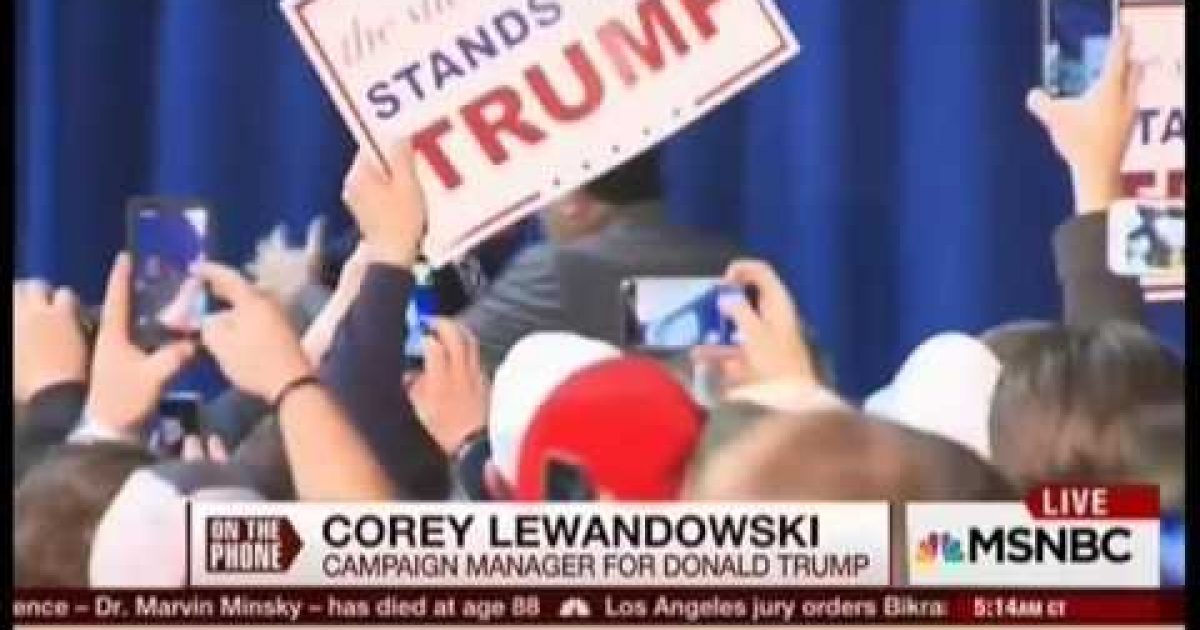 Donald Trump’s campaign manager Corey Lewandowski was on Wednesday’s Morning Joe program to talk about his bosses withdrawal from the FNC debate the next day.  Along with the normal Trump campaign super-sized political bravado, he attacked GOP Consultant Cheri Jacobus’ appearance on the Kelly Files the evening before and claimed that she had pitched the Trump Campaign for a job.  Lewandowski was lying.  Ms Jacobus wasn’t on the Kelly files the prior evening, and it was the Trump campaign who pitched her to work for the campaign.

This is what the campaign manager said to Joe Scarborough Wed. morning (video embedded below):

Cheri Jacobus was on [the Kelly Files], wanted to talk about Donald Trump. This is the same person who came to the office on multiple occasions trying to get a job from the trump campaign and when she wasn’t hired she was clearly upset by that. They go out of their way at fox to put left wing liberals on to make their own points because they can’t find conservatives to go it or they find people who want to attack Mr. Trump personal lift I don’t think traditional viewership of fox which leans more conservative is as concerned about what Michael Moore’s positions are but they choose to put him on to be as derogatory and demeaning as possible to Mr. Trump.

I had the opportunity to talk to Ms. Jacobus after Lewandowski’s MSNBC  appearance who told me about her experiences with the Trump camp.

The first issue was she wasn’t on Tuesday’s FNC show The Kelly Files, she was on CNN’s Don Lemon program Tuesday night.  Jacobus enlightened me to the fact that she hadn’t appeared on Fox News in the past “three months or so.” Possibly because hasn’t been shy about her displeasure of Trump’s campaign rhetoric during her TV appearances, especially after Trump’s “disgusting POW comments.” She used to appear on FNC and FBN but she told me that  “when Fox went full on pro Trump, my bookings on FOX and FBN ceased abruptly. So yes, Fox does cave to Trump’s demands.”

Perhaps it wasn’t a demand, because months before, Lewandowski showed Jacobus his proof that Fox was in the tank for Donald Trump

Jacobus explained that before Trump had announced he was running she was approached for a Trump job by an old friend named Jim Dornan who had been doing exploratory work for the campaign.

Dornan, a friend for thirty years asked if she’d be interested in being the communications director for the Trump campaign committee. Jacobus told him joining a campaign was a bit premature. She hadn’t decided which candidate she preferred. And that was one of the reasons she was reluctant to join any Presidential committee full time.

Dornan responded with “can we at least talk?” And because she hadn’t seen her friend Jim Dornan in a while, she agreed to the lunch. But in her mind she felt that Trump was a political buffoon, and worried that a job with the Trump campaign would be a career killer.

The day of the lunch it was raining and as anyone who has ever tried to get a cab in Manhattan on a rainy day knows, it’s an almost impossible task. Jacobus called her friend Jim on the way to lunch to explain she’d be a bit tardy to lunch (which was at Trump Tower). During that call Dornan asked if she would mind if Corey Lewandowski joined them for lunch. That’s when she realized the lunch would be more of a “formal” interview.  And that lunch played out like a get to know you type interview lunch.

After the lunch Jacobus was still on the reluctant side, she felt it was a big job but it was a very emotional environment. After a while she  convinced herself to have an open mind. Jacobus stalled a few weeks, but eventually followed up with the professional “thank you for the meeting, it was great exploring opportunities” type follow up email. That’s when her old friend  friend called again saying it was time for a follow-up meeting.

It was that second meeting that closed her “open mind.” According to Cheri Jacobus, at that meeting Lewandowski showed himself to be an, “unhinged, unethical, naive, hot-head.”

For example the campaign manager bloviated how Fox News was going to lead their campaign effort.  He pulled out an email from Roger Ailes to Trump (which someone must have printed out for billionaire because he isn’t an email user). Trump had hand-written a note on the email to the campaign manager, but the real joy (for Trump and  Lewandowski anyway) was the words of Roger Ailes who said he would help Trump’s campaign anyway he could. While Ms. Jacobus may have seen such an email, I doubt highly that Roger Ailes would give those assurances (especially in writing)

That is not an email one shares with a person who has not yet joined the team. Jacobus added that Lewandowski told her if she worked for the Trump campaign, the billionaire could get her a Fox contract, “I almost laughed out loud” she said, “Bribe much?”

At the lunch they also talked about a Trump campaign super PAC. According to the law, a campaign is not allowed to coordinate with a candidate’s super PAC. In other words, that particular discussion was another thing the campaign manager should have kept to himself when conversing with an outsider.

As the meeting ended, the campaign manager (who she described to me as a truly disturbing guy) walked Cheri Jacobus to the elevator. As the doors were closing, Jacobus told him that she didn’t like yelling at reporters. Lewandowski liked to yell as a “strategy,”  she told me. And added, “I’ve yelled at reporters a handful of times in 30 plus years in the business. But as a strategy? no way.”

Cheri Jacobus, left that meeting convinced she didn’t want to work for Trump, and her comment as the doors closed disclosed the same to Lewandowski. But nevertheless she still followed the professional courtesy of sending a “thank you for the meeting-type email.”

Apparently the press was investigating an illegal collusion between the Trump camp and his SuperPAC, which may be the real reason Trump disassociated himself from the PAC and shut it down.

Soon after their second meeting the Wall Street Journal wrote a piece about Mr. Trump’s campaign frugality. The article also explained how Jacobus’ friend Jim Dornan was hired to run the super PAC (and why he quit).

Before he launched his official campaign in June, Mr. Trump recruited Republican operative Jim Dornan to run a supportive super PAC. Mr. Dornan, according to the people, asked Mr. Trump to call a list of 20 wealthy friends and business associates, including Mark Burnett, the creator of Mr. Trump’s “Apprentice” franchise, and Terry Lundgren, the chief executive of Macy’s Inc., which sold Trump-branded clothing until the backlash over Mr. Trump’s comments about Mexican immigrants in June.

Mr. Lewandowski said he had no knowledge of the activity of super PACs backing Mr. Trump. Mr. Dornan said he couldn’t discuss his association with Mr. Trump because he had signed a legal agreement barring him from discussing it as a condition of employment. Others said almost all campaign staff members had signed similar agreements.

In October the Washington Post wrote an article called, “New ties emerge between Trump operation and super PAC.” For the piece they interviewed Ms. Jacobus who told them much of the same story she told me today.

A New York-based Republican political consultant who was approached for a job with the Trump campaign told The Post that Lewandowski openly discussed the role a super PAC would play to support Trump’s candidacy in two meetings in the spring.

“The super PAC definitely came up in these conversations,” said Cheri Jacobus, who said she met with Lewandowski in mid-May and early June at the Trump Tower in Manhattan to discuss a possible job as a communications director.

“He mentioned it as part of, ‘This is what’s going on, this is when he plans to announce, the super PAC is in play,’ ” said Jacobus, who has managed several congressional races and previously worked for the Republican National Committee.

In the same article Lewandowski corroborated  that he had met with Jacobus and had discussed the super PAC with her.

Lewandowski noted that his meetings with Jacobus occurred before Trump officially declared his candidacy. Trump’s political team eventually decided to pursue a traditional campaign and not to bless a super PAC, he said.

“We looked at all the options before us and decided not to have a super PAC,” he said.

Lewandowski noted that his meetings with Jacobus occurred before Trump officially declared his candidacy.

So why is Cheri Jacobus saying all this now?  While anybody who has seen her recent appearances on CNN knows that she is not a huge fan of “the Donald,” that is not her inspiration. Taking a page from the Trump strategy of counter-punching,  Ms. Jacobus told me that she would have remained silent about some of Lewandowski’s revelations at their meetings if the campaign manager hadn’t lied about her on national TV this morning.

After our discussion I did some investigation of Mr.Lewandowski who was described by the NY Times as someone Trump appears to see as a kindred spirit

a deeply ambitious, sometimes-mercurial master of self-reinvention (he has also been a New Hampshire state public safety officer and a real estate agent). And, like Mr. Trump, exactly what his political leanings are beyond a belief in small government is uncertain.

(…)While some candidates look for a manager who will rein in their impulses, Mr. Lewandowski channels them. He is not interested in telling Mr. Trump what to do or in being a master strategist. His greatest attribute, Mr. Trump said in an interview, is that “he knows when to speak up.”

While Trump claims he is an outsider, Lewandowski is an insider…well more like an exiled insider. He worked at the RNC and eventually for former congressman Bob Ney (R-OH) . Sources have told me that when he was Ney’s chief of staff he would scream at the committee staffers who were investigation Ney for corruption.  The Ohio congressman eventually from Congress and plead guilty to charges of conspiracy and making false statements in relation to the Jack Abramoff Indian lobbying scandal. He was served 30 months in prison.

After working for Ney, Lewandowski worked for Citizen’s United and Americans For Prosperity neither one exactly “outside organizations.”  According to the Times article: After seven years with Americans for Prosperity, Mr. Lewandowski moved on, leaving behind some fans who found him to be efficient and effective, but also some detractors, who [like Cheri Jacobus] found his abrasiveness off-putting.

Not everything about Mr. Lewandowski is negative. One incident in the Times piece proved that the Trump campaign manager was a big supporter of the Second Amendment when he was Congressman Ney’s chief of staff he was arrested because he accidentally brought an unloaded gun into a House office building in the bottom of his laundry bag.

My discussion with Cheri Jacobus was enlightening, but not surprisingly so.  As recently as yesterday I had posted my concerns about Trump being nothing more than a big bloviating bully. Between my phone call with Jacobus and Lewandowski’s phone call with Joe Scarborough, I learned that Trump’s campaign manager is just as much a bully has his billionaire boss.  And rather than taking the attacks sitting down, Cheri Jacobus decided to fight back with the truth.