The Mooch Has Been Cut Loose, Scaramucci OUT As Comms Director 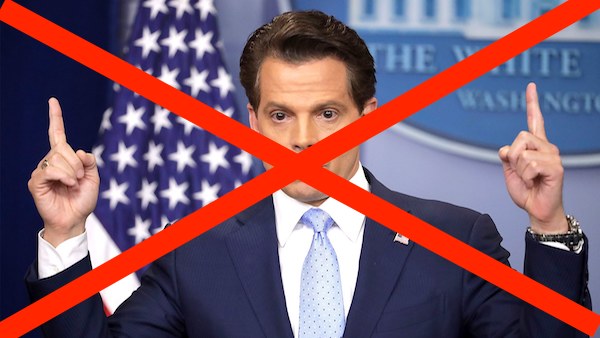 The Mooch is has been cut loose.

President Trump has decided to remove Anthony Scaramucci from his position as communications director. He will have no position within the Administration.  John Roberts is reporting that the move was made at the request of the new Chief Of Staff, General John Kelly who wanted to make sure there was a clear chain of command, Scaramucci wanted to report directly to the POTUS. Gen. Kelly made it clear to members of the White House staff at a meeting Monday morning that he is in charge and this move seals the deal. In fact, at Monday’s press briefing Spox Sanders said that everyone, including Ivanka and Jared, will go through General Kelly.

Mr. Scaramucci’s abrupt removal came just 10 days after the wealthy New York financier was brought on to the West Wing staff, a move that convulsed an already chaotic White House and led to the departures of Sean Spicer, the former press secretary, and Reince Priebus, the president’s first chief of staff.

The decision to remove Mr. Scaramucci, who had boasted about reporting directly to the president not the chief of staff, John F. Kelly, came at Mr. Kelly’s request, the people said. Mr. Kelly made clear to members of the White House staff at a meeting Monday morning that he is in charge.

This is a positive step for the Administration as it means everyone on the White House staff will report to General Kelly, the way it should be. The chief-of-staff’s job is to take the info from the POTUS and disseminate it to the White House Staff and take the info from the staff and present it to the POTUS.  It’s the only way an administration can speak with one voice—which is one of the failings of the Trump White House.

Now that Scaramucci is gone, will the president ask Sean Spicer to stay on as Comms director? He only quit because of Scaramucci. Spicer isn’t scheduled to leave the WH for another two weeks.