“Did You Get A Paycheck On Friday?..My People Don’t. I Bet You Got A Paycheck, Didn’t You?” 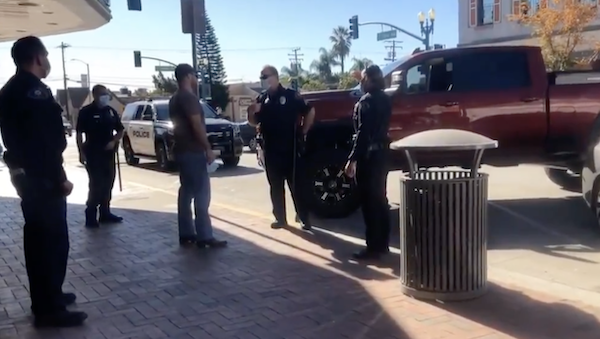 A video taken in late December shows a “desperate” restaurant owner confronting a health inspector over COVID restrictions, blocking his vehicle in with a truck. Bread & Barley

The incident involved Carlos Roman, owner of Bread & Barley restaurant in Covina, California, and a health official checking that his establishment was adhering to the government’s onerous restrictions.

Roman told CBS Los Angeles that he dipped into his personal savings and shelled out thousands of dollars to create a patio at his business for outdoor dining, only to have outdoor dining halted as well.

The health inspector reportedly found two customers dining outside who Roman claims weren’t being served by his restaurant.

The inspector still issued a citation.

Owner of Bread & Barley Carlos Roman, eventually moved his truck from blocking the public health inspector from leaving after police warned him several times of his truck being towed for blocking the road. Sunday was take on Sunday by a employee of Roman's pic.twitter.com/98jl2Ej9YJ

Roman, according to the Daily Caller, received a “notice of closure” as well as $1,000 in fines for “interfering with the duties of health officers” and “failure to comply with health officer order.”

It’s almost like they don’t care about this man and his business suffering. Of course, they don’t. After all, it happened in the people’s republic of California– Gavin Newsome’s empire.

Officers on the scene during the incident threatened that a tow truck was coming to remove his vehicle and said, “this is not the way to settle things.”

Roman replied by shredding the health inspector and officers for earning a paycheck while his employees go without.

“We’re all in this together. We’ll just all starve to death and die.”

Owner of Bread & Barley Carlos Roman, has received a 'Notice Of Closure' order and has been fined for $1000 by public health. 'Interfering with the duties of health officers' and 'failure to comply with health officer order' are the fines Roman has received. pic.twitter.com/euhBWi4yG3

People Are Rising Up Against Tyrannical Government

A GoFundMe page has been established for Roman, his restaurant, and his employees as they battle these COVID restrictions.

In late November, a gym owner in Orchard Park, New York, tore up a $15,000 fine from the Erie County Health Department during a live Fox News interview.

Dinero had been hit with the extraordinarily hefty fine following a confrontation in which roughly 50 business owners attending a meeting inside the gym refused to allow a pair of sheriffs and a health inspector entry to the building without a warrant.

The moment tonight when Athletes Unleashed gym owner Robby Dinero ripped up the $15k fine he received today from @ECDOH LIVE on @FoxNews. The fine was for holding a rally inside his gym Friday night. @NewsRadio930 pic.twitter.com/FUk6sOSCX4

Atilis Gym in New Jersey has seen its owners arrested and over $1.2 million in fines levied upon their business. They continue to defy lockdown orders from New Jersey Governor Phil Murphy.

Atilis Gym is continuing to defy New Jersey's #Covid restrictions, and they're now facing over a million dollars in fines. Co-Owner Ian Smith says he has no plans on paying those fines, and explains how he continues to keep his business afloat! #VarneyCo pic.twitter.com/Jxv4mc1ghz

And other restaurants in California are also defying COVID restrictions as a means of “survival,” Fox News reports.

“Businesses throughout the county have invested thousands of dollars to ensure safety for their employees and customers only to be punished for the recent surge they have done everything in their power to prevent,” Los Angeles County Supervisor Kathryn Barger explained.

How much are restaurants contributing to the spread of COVID-19 in LA County? https://t.co/jCE3aPRVNv via @abc7

Meanwhile, in Los Angeles County, ABC 7 reports that “restaurants have been linked to less than 4% of coronavirus outbreaks in non-residential settings.”

Yet law enforcement and health department officials continue to embarrassingly go after people like Roman and their restaurants with Draconian COVID restrictions.

Cross-Posted With The Mental Recession