35 Years Ago Reagan Uttered His Most Powerful Words, ‘Mr. Gorbachev, Tear Down This Wall!’ 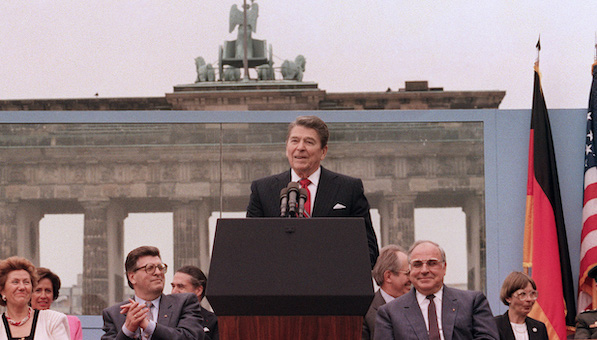 The Berlin Wall was the physical representation of the “Cold War.” The structure across Berlin was not built to protect Communist Germany from the forces of freedom. It was constructed to keep the East Germans from fleeing communism.

For the 750th anniversary of the founding of Berlin, on June 12th, 1987, President Reagan explained the reasons the wall had to come down in a way no other POTUS before him had ever had the guts to confront an enemy.

Peter Robinson, who wrote the speech, gave the WSJ an inside view of how the most famous line got into Reagan’s address;

The Berlin Wall address revealed a lot about Reagan himself, I always granted. The State Department, the National Security Council and the ranking American diplomat in Berlin all objected to it. The challenge to tear down the wall, they insisted, would raise false hopes, place Mr. Gorbachev in a difficult position inside the Politburo, and divert attention from modest but realistic initiatives, such as negotiations to increase air traffic between West Berlin and Western Europe. State and the NSC submitted alternative drafts—by my count, no fewer than seven—each of which omitted the call to tear down the wall. The president insisted on delivering the call anyway.

“The boys at State are going to kill me for this,” the president told Kenneth Duberstein, his deputy chief of staff, in the limousine on the way to the wall, “but it’s the right thing to do

More than just a speech, Reagan’s words presented an America determined to allow the world’s nations to embrace freedom. Not through war but via a robust American military to create mutually assured destruction, bankrupting the USSR, and constant offers of peace,

We welcome change and openness; for we believe that freedom and security go together, that the advance of human liberty can only strengthen the cause of world peace. There is one sign the Soviets can make that would be unmistakable, that would advance dramatically the cause of freedom and peace. General Secretary Gorbachev, if you seek peace, if you seek prosperity for the Soviet Union and eastern Europe, if you seek liberalization, come here to this gate. Mr. Gorbachev, open this gate. Mr. Gorbachev, tear down this wall!

In one of the United States’ greatest victories, just two years after President Reagan made that speech,  the wall was down, communism in eastern Europe was dead, and the cold war was over. The disintegration of the USSR began with the “tear down this wall” speech.

Watching the speech (embedded below) reminded me of the time America had a leader and uniter in the White House instead of the spineless divider occupying the people’s house today. Watch the video of the Berlin wall speech below.