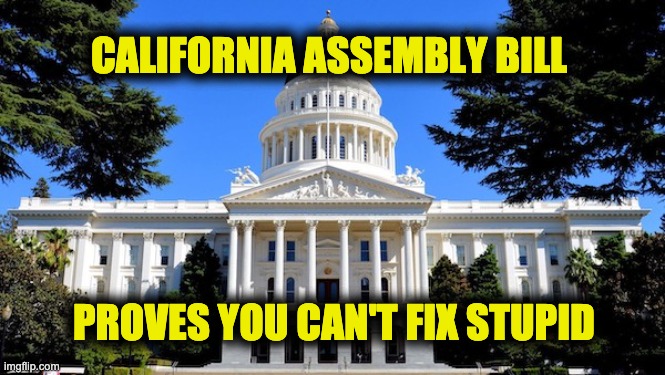 Check your calendar–it’s not April 1st. There are actually people this crazy in California. California Assembly Bill 1084 bans retailers from having separate Boys and Girls sections. Yep, GI Joe and Barbie can cohabitate, but a dad going to a store to buy a GI Joe might mistakenly come home with a Ken. ban boys and girls sections

Parents of young kids have a hard enough time finding the best clothes and toys to buy for their children when the stores separate the genders. With everything together, that job gets much harder. T-Shirts can look the same, but girls’ and boys’ sizes are different.

This bill would require a retail department store with 500 or more employees that sells childcare items, children’s clothing, or toys, to maintain undivided areas of its sales floor where the majority of those items being offered are displayed, regardless of whether an item has traditionally been marketed for either girls or for boys. The bill would prohibit the use of signage within each undivided area indicating that particular items are for either girls or for boys. If a retail department store places a childcare item, an article of children’s clothing, a toy, or anything that could be considered a combination thereof, in an area of its sales floor outside of the undivided areas where the majority of like items are sold, the bill would prohibit the use of any signage with respect to the item that indicates that it is either for girls or for boys.

This bill would also require a retail department store located in California that maintains an internet website through which it sells childcare items, children’s clothing, or toys, to dedicate a section of the internet website to the sale of those items and articles that is titled, at the discretion of the retailer, “kids”, “unisex”, or “gender neutral”, as specified.

How about titling it “some idiots in the legislature won’t let me separate the boy and girl products.”

Beginning on January 1, 2024, the bill would make a retail department store that fails to correct a violation of these provisions within 30 days of receiving written notice of the violation from the Attorney General liable for a civil penalty of $1,000, as provided.

They claim the ban is necessary to prevent people from being treated differently due to their sex. Guess what? They should be— boys and girls are different. They like different things.  When my daughter was young, I tried to avoid pushing her into traditional gender roles, so I brought her home a Tonka Truck. She never touched it. It wasn’t a waste of money, though, because when her younger brother was born, he played with the truck.

I spent ten years in the toy business (hence the Tonka truck). If boys and girls liked the same thing, toy companies wouldn’t make different products for each gender. They would save production money and boost profits. But that’s not how kids work.  Once children reach age five or six, they start requesting the toys they want (rather than parents selecting them). In the vast majority of cases, boys ask for boy-oriented toys, and girls want girl toys.

The Assembly members Mr. Low and Ms. Garcia either don’t have children,  or if they are parents, the kids are very young, or they don’t notice what their kids want.

There is a bright side–despite the fact this bill was authored in the extreme leftist state of California, it only talks about boys and girls–two sexes.

In the end, this bill will not prevent kids from being treated differently because of their gender. But it does prove true these wise words, “you can’t fix stupid.”