I'll Have Some Of What She's Smoking 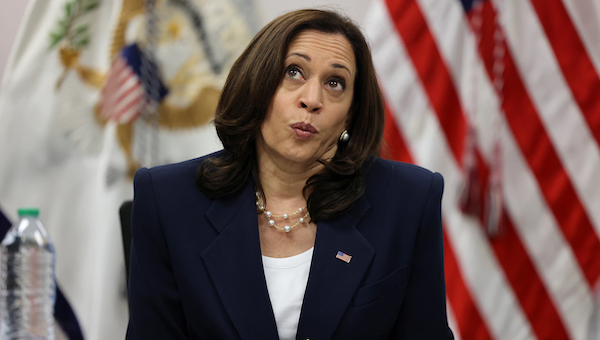 The entire leadership of our nation is delusional, not to mention malevolent. Their agenda for open borders is obvious.VP Kamala Harris claims that the border is secure, as does the White House Press Secretary. So let’s go through a few things that should remind everyone that they are full of donkey poop.

The “Border is secure.”

People who live in border towns are afraid. Illegal Aliens tromping through their properties are killing dogs, stealing things, and even assaulting people. The property owners are arming themselves. The migrants leave piles of trash behind as well. It is not safe either for ranchers or residents.

It is also not safe for the illegals who have been cooked to death in airless backs of trucks, abandoned, killed by the cartels, or drowned as they try to cross the Rio Grande. Illegal immigration is inhumane for the border crossers and the Americans on this side of the border.

Migrants have killed pets, stolen from shops and knocked on doors late at night in a Texas border town, prompting some residents to arm themselves, locals told Fox News.

Griselda, another local business owner whose employees are all female, said she used to close her business at 9 p.m.

“We now close at seven because it gets dark, people are walking around, all girls, you just never know,” she told Fox News.

NEW: Good morning from Eagle Pass, TX, where another large group of approx 200+ migrants just crossed illegally onto private property. Almost all of them are single adults, mostly from Venezuela. Somebody hung a Venezuelan flag on the barbed wire fence built by TX here. @FoxNews pic.twitter.com/yIx2vdiEqn

So Texas has been sending busloads of migrants to Democrat-run cities like New York, Chicago, and Washington DC. Even the Democrat Mayor of El Paso has loaded up migrants and sent them on to other cities – at the request of the migrants. Nobody is being tricked into boarding the buses. That’s where they wanted to go. But to hear Democrats in the blue cities tell it, they are having a fit over the migrants being a burden. Now they know what the border towns are experiencing.

NEW: The Democrat-led city of El Paso, TX has been sending its own buses of migrants to NYC, & the city says they are so overwhelmed, they can send up to 4 buses per day. Local CBP facilities & NGOs are overcrowded, so the federal gov is releasing migrants onto El Paso’s streets. pic.twitter.com/avsKQ6VWbi

Then there’s Lori “Beetlejuice” Lightfoot, Mayor of Chicago, who packed the migrants back up and shipped them off to a Republican suburb. But aren’t these big deal blue cities supposed to be “sanctuary” cities? Apparently, immigrants are not as welcome there as you might have thought. DC Mayor Bowser declared an emergency, Lightfoot shipped them onward, NYC mayor Adams is throwing a fit, and everyone is having a total meltdown. What about the cities that are trying to deal with the overload at the border? Therefore “the border is secure” is a lie.

On August 30, WH Press Secretary Karine Jean-Pierre claimed that “it’s not like people are just walking over” the border. True, some of them are swimming while others are hiding in trucks. But they are sneaking across the border, and video footage shows it. Border Patrol agents were stunned by her remark.

“There’s only two reasons she said that, and that is either she is extremely dumb or she is flat-out lying and hopes America is so stupid we would believe her,” one agent told Fox News Digital. “18 USC 1001 says it is a federal crime to knowingly make false statements to the U.S. government. Too bad the government is not held to the same standard as the citizenry, and that is assuming [Jean-Pierre] is not dumb but just a liar.”

A number of agents Fox spoke with were unsure of whether the comments were borne out of what they saw as ignorance or were a deliberate falsehood. Fox

So Kamala’s statement that the “border is secure” is either a blatant lie, or she’s as dumb as a post. We vote for both.