Geraldo Tried Using The Typical "No Facts Included" Leftist Argument, Bongino Was Having None Of It. 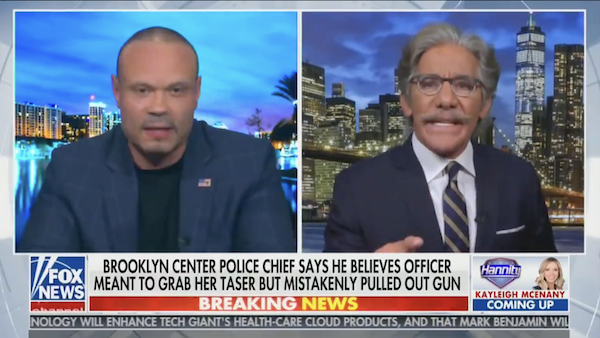 Most of us are used to the left’s favorite tactic by now. Rather than engaging on issues, they go straight for the emotion, cheating for an easy ‘win.’ When Geraldo used that tactic on Sean Hannity’s show during a discussion of the shooting of Daunte Wright,  Dan Bongino was having NONE of it—and he let Geraldo have all of his wrath. Bongino lambastes Geraldo

It’s been something of an ongoing grudge match on Hannity. Any time the twin topics of race or immigration come up with these two on the panel, you KNOW it’s gonna get feisty.

Geraldo, in many ways, is not a leftist. At least that’s what he claims. He has bought into the left’s consensus talking points on this. He’s also so emotionally invested he can’t see that his own arguments are based on generalized emotion rather than specific issues.

Conservatives often lose these sorts of conversations because so many of us don’t have an answer for the default attack mode of ‘you are a heartless, soulless, sonofabitch conservative who doesn’t care about hurting people.’

Bongino, on the other hand, has been doing this for a long time and isn’t intimidated by that line of attack. Because he knows how to defang that argument and flip it on its head.

This is exactly what he did to Geraldo when he tried to blow off ALL Conservatives for being heartless about the fear they have when facing police officers.

Bongino did more than hit him with facts. He demanded that Geraldo back up his allegations with something more solid than emotional appeal. Watch how Geraldo flips and flops like a beached fish.

Then Dan came in for the coup-de-grace… telling Geraldo that the reason these young men have become so terrified of ‘evil’ police is that people like Geraldo have TOLD them they have every reason to be afraid. Alarmists and activists have been distorting facts and injecting an element of racial animus into every issue where police and minority men interact, whether it’s there or not.

Even (and especially) when there is no direct proof that race had any role in the underlying cause of many of these situations gone wrong.

History tells us Dan is right.

We could look back to, say, Milwaukee in 2016 when a black man had been shot by a black cop, but none of that mattered. Right from the beginning, the narrative was that it was racist cops killing a black man, and riots followed that news cycle just like night follows day.

Even in the Derek Chauvin / George Floyd case, everyone and their dog has accused the cop of being motivated by racism, but has anyone shown beyond reasonable doubt that the events that happened that day were somehow the result of racial animus?

We used to put the burden of proof on the accuser.

The left has successfully flipped it, and you are racist until you can prove otherwise.

That is a dangerous precedent and a sentiment found in some of the most brutal authoritarian regimes. It has no place in a nation that was founded on the presumption of innocence.