BOMBSHELL Kerry Audio on rise of ISIS: ‘We Watched It Happen-We Thought We Could Probably Manage’ It 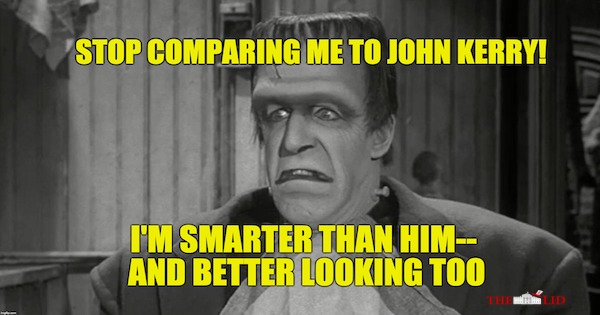 It’s not that we haven’t been able to put this together from information that was already out there.  We’ve known for some time that the Obama administration was warned about the rise of ISIS as early as August 2012, by field intelligence forwarded from the Defense Intelligence Agency (then under Army Lt. Gen. Michael Flynn, who is now Donald Trump’s national security adviser-designate). Until this John Kerry audio turned up, we had no proof that the Obama administration watched ISIS grow and did nothing.

We knew when ISIS attacked Mosul, Iraq in June 2014 that the Obama administration had been warned about ISIS’s encroachments in Iraq months earlier.  (I wrote about ISIS’s menace to central Iraq, through the Euphrates Corridor, in January 2014.  My concern at the time was that ISIS was a different kind of threat, one that emphasized conquering and leveraging territory.)

Yet after the fall of Mosul in 2014, John Kerry had the crust to claim publicly that “people were surprised everywhere” by the ISIS attack and the city’s subsequent fall.  This in spite of a Kurdish official’s statement about the ISIS assault on Mosul, and the warning the Kurds had given:

“We knew exactly what strategy they [ISIS] were going to use, we knew the military planners,” the official said.

In the two-plus years since John Kerry’s claim of surprise, both he and Obama have downplayed the significance of ISIS.  Occasionally they have emitted a few burps of apparent determination to “degrade” and even “defeat” ISIS.  But the overall tone of their public statements has been dismissive, treating ISIS as a sort of manageable problem, one that doesn’t merit all the fuss being made about it.

John Kerry concluded a September 2014 op-ed with these complacent sentiments:

Acting together, with clear objectives and strong will, we can protect the innocent, contain the danger, and demonstrate that our ideals are more powerful than those who seek to impose their warped beliefs at the point of a gun. The Islamic State is odious, but it is far from omnipotent — it will be defeated.

Which sounds kind of determined, until you look at the administration’s track record of protecting none of the innocent, failing utterly to contain the danger, and in no way demonstrating that “our” ideals are more powerful than ISIS’s (at least as far as the global pool of potential jihadi recruits is concerned).

You can also look at Kerry’s perspective on the damage done by ISIS-linked terror attacks abroad (from 2016):

“If you decide one day you’re going to be a terrorist and you’re willing to kill yourself, you can go out and kill some people. You can make some noise…perhaps the media would do us all a service if they didn’t cover it quite as much. People wouldn’t know what’s going on,” Kerry said.

So the real issue is not that thousands of people are being killed in spectacularly gruesome terror attacks.  It’s that the wider public finds out about it, and gets a bad attitude about things.

Obama, meanwhile, added in November 2015 to his notorious characterization of ISIS as a “jayvee” outfit, when he offered this analysis:

Obama again irked his critics by using a tone [about ISIS] that some said appeared flip when closing out his 10-day Asia trip. “They’re a bunch of killers with good social media,” Obama told reporters on Sunday. ISIL is “dangerous,” he said, but, he added: “Our way of life is stronger. We have more to offer.”

One is tempted to say “Water that tree of Western life with your own blood, bub – or get out of our way and let someone competent fight ISIS.”  But I digress.

The point of this post, now that you have the history fresh in your mind, is that John Kerry confirmed, in a discussion with Syrian militants in September 2016, that the Obama administration saw ISIS coming, and did nothing to thwart ISIS in the early stages when it would have been much simpler.

It’s very probable that Obama actively armed ISIS in its early days, although that’s not what I want to hammer here.  The writer “Sundance” at Conservative Treehouse reinforces his longstanding case that the U.S. government was dealing directly with ISIS’s top leadership in 2012, and you can read his analysis at the link in the last paragraph.  But that’s not my central focus for this post, which I want to keep brief.

The focus is on the revelation, straight from the horse’s mouth, that the conclusions many observers have put together from previously known facts are valid.  Obama and Kerry knew ISIS was establishing a territorial stronghold in Syria, and watched it without doing anything to thwart it, because they thought ISIS could bring down Assad, and they thought they could “manage” the ISIS problem.

Based on their comments since 2014, they apparently still think they are “managing” the problem of ISIS.

The audio of the September 2016 meeting, which took place at the UN headquarters in New York, is presented in a YouTube video (below).  The New York Times was the first to obtain the audio.

Conservative Treehouse flags two passages, one starting around the 2:00 mark and the other starting at 18:30.  These are good pointers, but I encourage listening to the whole session, because it highlights the dissatisfaction of the Syrians with the results of the Barack Obama-John Kerry policy.

It also validates prior concerns about Kerry’s posture on working with the Russians in Syria; i.e., he knew full well that the U.S. and Russia were at cross-purposes there, and that Russia would not respect the same limitations on the use of force to minimize collateral damage.  Yet this past summer, he was extremely urgent about creating a joint military project between U.S. and Russian forces in Syria.

(There’s yet another delightful passage in which John Kerry explains that the U.S. doesn’t attack Hezbollah in Syria – even though Hezbollah is a designated terrorist group and is attacking Syrians – because Hezbollah hasn’t declared hostility to the U.S., but only to Israel.)

But here’s the money passage.  John Kerry is responding to a self-described social-media activist, a Syrian woman who has just taken him to task for, in essence, not accomplishing any of the goals he laid out in his September 2014 op-ed.  Start at 26:08 if you want to hear just Kerry’s comments.  Emphasis added:

I mean, the reason Russia came in is because ISIL was getting stronger…Daesh was threatening the possibility of going to Damascus, and so forth.  And that’s why Russia came in.  Because they didn’t want a Daesh government, and they supported Assad.

And…and…uh… and we know that this [ISIS’s conquest] was growing.  We were watching.  We saw that Daesh was growing in strength.  And that Assad was threatened.  Uh…we thought, however, that we could probably manage, uh, you know, that Assad might negotiate, and instead of negotiating, you got Assad, he got Putin, uh, to support him.

So, uh, uh, it’s truly complicated…I mean, you know how complicated it is, you live in it…

(FWIW, check my January 2014 post linked above on how ISIS’s territorial conquests would alarm Russia and probably bring her into the fight in a more overt way.  It was actively stupid to not realize that likelihood, as Kerry implicitly says in the audio that he and Obama did not.  Any reasonably competent geopolitical analyst could foresee three years ago what would happen if ISIS gained a territorial stronghold that would menace Assad and Iraq.)

But “complicated” here is an excuse, as it so often is, for misguided action, or for inaction.  The bottom line, as outlined by John Kerry himself: ISIS rose, conquered territory, and became a global menace, and all the time, he and Obama were hoping this growing, aggressive ISIS would force Assad to negotiate.