BOMBSHELL! DNC Staffer In Touch With Wikileaks Before He Was Murdered-Updated w/ Corroboration 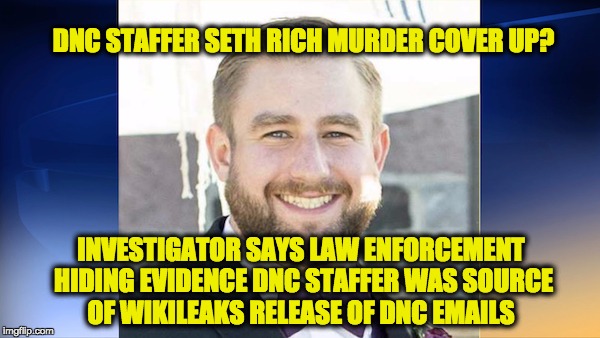 Note Post updated to include a statment from the rich family and the news of a second source confirming the original report:

A new investigation claims that a DNC staffer was in touch with Wikileaks before he was killed last July and that the information was covered up by either the DC police or the FBI.

Last summer DNC Staffer Seth Rich was shot and killed in an upscale DC neighborhood. The police said it was an attempted robbery…but nothing was taken. At the time there were rumors that Rich was the person who gave Wikileaks the emails about the party fixing the primary process for Hillary Clinton, the emails that led to Debbie Wasserman Schultz resigning as party leader.

Now, Rod Wheeler, a private investigator hired by the Rich family, claims there is evidence on Rich’s laptop which suggests he was communicating with Wikileaks and that either the FBI or the Washington DC Police are holding on to Rich’s laptop to cover up Mr. Rich’s death.

DNC staffer Seth Rich did have contact with Wikileaks before he was gunned down in Washington DC last year, a new investigation has claimed.

Mr Rich, 27, was shot dead in the city’s affluent Bloomingdale neighborhood in the early hours of July 10 while on the phone to his girlfriend after a night out in what police claim was a ‘botched robbery’.

His father insisted his son was not behind the mammoth leak of tens of thousands of DNC emails prior to the 2016 presidential election, including messages from seven key staffers, which led to the resignation of chair Debbie Wasserman Schultz.

But Rod Wheeler, former Washington DC detective turned  private investigator who was working for the Rich family, claims there is evidence on his laptop which suggests he was communicating with Julian Assange’s site.

Wheeler told Fox 5 DC that he believes there is a cover up and the police department may have been told to back down from the investigation.

Wheeler added that a source in the D.C. police department “looked him in the eye” and told him that investigators were told to stand down in the case.

“Now, that is highly unusual for a murder investigation, especially from a police department,” he said. “Again, I don’t think it comes from the chief’s office, but I do believe there is a correlation between the mayor’s office and the DNC and that is the information that will come out.”

Speaking to Dutch television program Nieuswsuur Tuesday [Aug.10, 2016] after earlier announcing a $20,000 reward for information leading to the arrest of Seth Rich’s killer, Assange said the July 10 murder of Rich in Northwest Washington was an example of the risk leakers undertake.

“Whistle-blowers go to significant efforts to get us material and often very significant risks,” Assange said. “As a 27-year-old, works for the DNC, was shot in the back, murdered just a few weeks ago for unknown reasons as he was walking down the street in Washington.”

When the interviewer interjected that the murder may have been a robbery, Assange pushed back.

“No,” he said. “There’s no finding. So… I’m suggesting that our sources take risks.”

When pressed as to whether Rich was, in fact, the leaker, Assange stated that the organization does not reveal its sources.

After Fox tweeted out the story about the Seth Rich coverup, Wikileaks retweeted it, an indication that they believe the story to be true also. 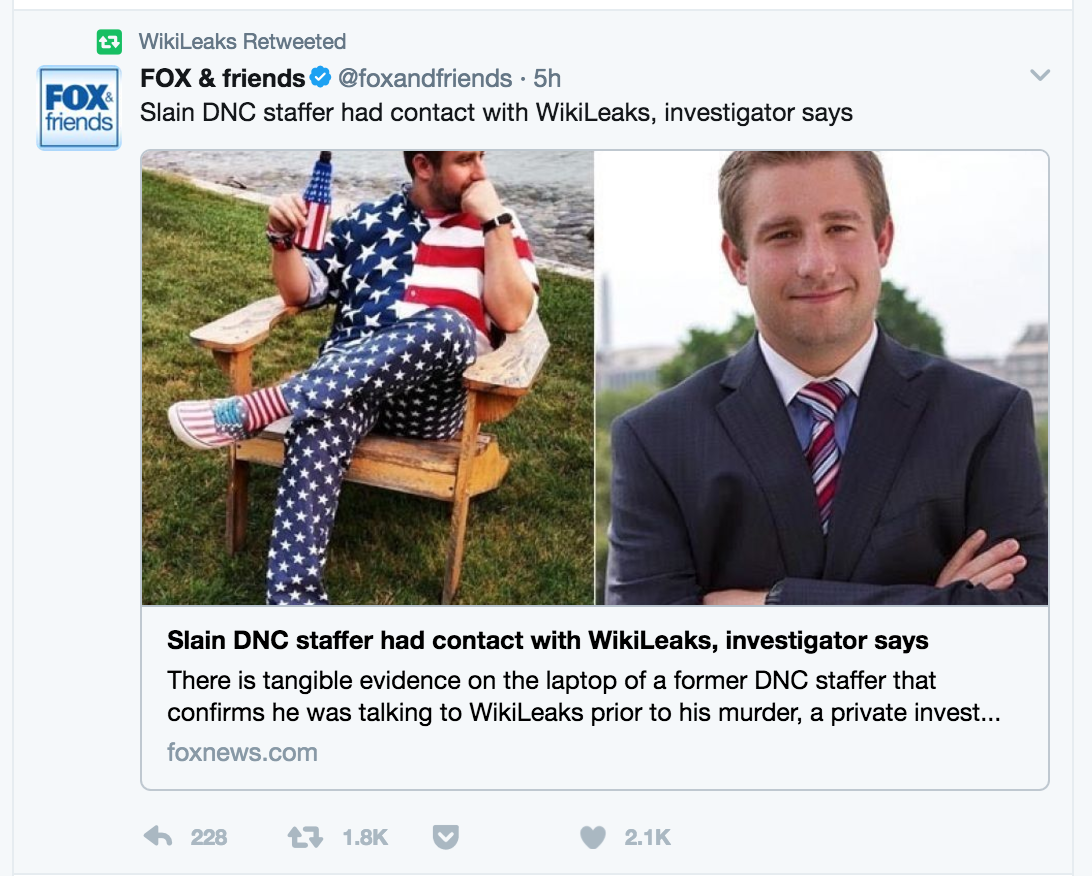 The Rich Family released a statment saying they are very upset with the P.I. Rod Wheeler. Because he hadn’t shared his findings with them as yet, and he went to the press despite an agreement that he was supposed to get their permission before he went to the press.

A federal investigator who reviewed an FBI forensic report — generated within 96 hours after DNC staffer Seth Rich’s murder — detailing the contents Rich’s computer said he made contact with WikiLeaks through Gavin MacFadyen, a now-deceased American investigative reporter, documentary filmmaker, and director of WikiLeaks who was living in London at the time.

“I have seen and read the emails between Seth Rich and WikiLeaks,” the federal investigator told Fox News, confirming the MacFadyen connection. He said the emails are in possession of the FBI, while the stalled case is in the hands of the Washington Police Department.

The revelation is consistent with the findings of Rod Wheeler, a former DC homicide detective and Fox News contributor and whose private investigation firm was hired by a third party on behalf of Rich’s family to probe the case. Rich was shot from behind in the wee hours, but was not robbed.

Below is a video of the original Fox 5 report: